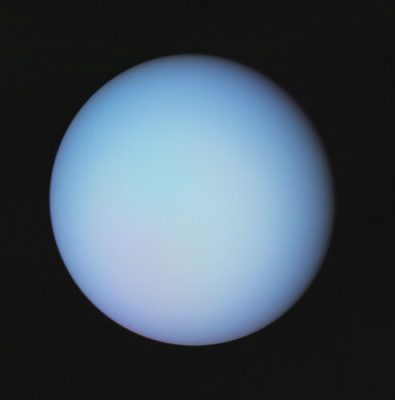 Uranus is the seventh planet in the Solar System.  It is the third biggest after Saturn and Jupiter.  It is named after the ancient Greek god Uranus.  Uranus is the god of the sky.  The Roman equivalent is Caelus.  He is Saturn’s papa.  The National Aeronautics and Space Administration (NASA) has stated that the scientific pronunciation of Uranus is YOOR-un-us.

The mass of Uranus is about fourteen and a half times of Earth’s.  It is the least dense after Saturn.  The diameter is four times the size of Earth’s and a bit larger than Neptune’s.  The internal structure consists of an outer helium and hydrogen occupied layer with an ice filled mantle in the middle.  The ice is not made of traditional ice, but rather a dense and warm fluid built with ammonia, water and other volatiles.  It has excessive electrical conductivity and has been branded as the water/ammonia ocean or wao(ooooooooooh) for short.  The dominance of ice over gas has placed Uranus in an exclusive grouping known as the ice giants.  The other frosty member is Neptune.  There is an ongoing investigation to decide whether Neptune earned its membership through merit and hard work or if it was through a classic planetary case of nepotism (neptunism).

The core consists of iron and nickel silicate based rock.  It is petite and half the mass of Earth’s.  The core’s center pressure reaches 800 GPa (8 million bars), but Uranus is seldom nervous.  The temperature is over eight thousand five hundred degrees Fahrenheit.  The fabled diamond hailstorm may occur when carbon atoms and methane molecules dissolve under the extreme temperatures and condense into crystals (diamonds).

The amorphous atmosphere includes a troposphere, stratosphere and thermosphere.  Hydrogen and helium molecules swirl throughout it.  Methane (CH4) is abundant and it gives the planet its cyan and blue coloring.  Under three percent of the atmosphere is made up of it.  Residual amounts of hydrocarbons (methylacetylene, ethane, diacetylene and acetylene) make up the rest.  Comet dust leaves trace amounts of carbon dioxide, carbon monoxide and water vapor.  The sum is irrelevant.

The deepest portion of the Uranus atmosphere is the troposphere.  Stout winds and seasonal changes are common occurrences.  The troposphere is the densest layer and the temperatures drop the higher you travel up it.  The lowest section ranges between one hundred fifteen degrees and negative three hundred sixty degrees Fahrenheit.  The top plateau is colder and drops to over negative three hundred seventy degrees Fahrenheit.  Intricate ammonium hydrosulfide clouds are weaved in this layer.  Water clouds are possible in theory.

The middle level of the Uranian atmosphere is called the stratosphere.  The temperatures decrease with altitude in a range of one thousand and seventy degrees and three hundred fifty degrees Fahrenheit.  Hydrocarbons in the stratosphere absorb UV and IR radiation from the Sun and produce significant heat.  Photolysis occurs as a result.  Acetylene, ethane and methane are the most common hydrocarbons found in the middle layer.

The thermosphere is the outermost part of the atmosphere.  There is a consistent temperature between nine hundred eighty and one thousand seventy degrees Fahrenheit that permeates throughout it.  The low number of hydrocarbons causes the torrid temperatures.  Portions of the stratosphere and the thermosphere form an ionosphere.  The ionosphere is denser than Uranus’s neighboring planets.  Auroral activity is almost nonexistent compared to Saturn and Jupiter.

The magnetosphere (region around a planet where charged particles are deflected or trapped) has a fifty-nine-degree tilt from the rotation of the axis and does not originate from the geometric center.  The atypical geometry produces an asymmetrical output.  The magnetopause (boundary between the sphere and adjacent plasma) and magnetotail are similar to other planets.  Electrons, protons and trace amounts of hydrogen molecular ions are the main particles found in the magnetosphere.

Uranus is the coldest planet in the Solar System.  Seasonal variation is difficult to determine due to the lack of data.  Extreme fluctuations are thought to occur, but are unproven at this point in time.  The southern pole is much brighter than the northern one.  Evidence of the northern pole brightening may be proof of the variations.

There are twenty-seven known moons that orbit Uranus.  The natural satellites are named after famous characters in literature.  The biggest are Oberon, Miranda, Ariel, Umbriel and Titania.  Miranda (Uranus V) was discovered by Gerard Kuiper in 1948 and named after Miranda from the play The Tempest (William Shakespeare).  It is the innermost and smallest out of the five.  William Lassell found Ariel (Uranus I) in 1851.  It is the fourth largest and rotates around the equator.  Oberon is the second biggest moon and also called Uranus IV.  The name is derived from the King of the Fairies, Oberon, in A Midsummer Night’s Dream (Shakespeare).  William Herschel plotted it in 1787.  Umbriel or Uranus II was revealed by Lassell in 1851.  It is primarily made out of ice.  It has the darkest surface out of the five.  Herschel exposed Titania (Uranus III) in 1787.  It is the largest Uranian moon and the eighth biggest in the Solar System.  The name was inspired by the Queen of the Fairies in A Midsummer Night’s Dream.  It orbits within the magnetosphere.

Thirteen unique planetary rings encircle Uranus.  Most of them are narrow and relatively young.  They are made of dark particles that are micrometers thick.  Science believes they did not form with the planet.  Natural satellite impact and the resulting debris is the source.  Their names are 1986U2R/ζ, 6, 5, 4, α, β, η, γ, δ, λ, ε, ν and μ.  The brightest and densest is the ε ring. None of the other rings are able to get through to him. It is a shame too. ε is very smart.

It takes Uranus eighty-four years to orbit the Sun.  Its average distance from the big bright star is 20 Astronomical units.  The minimum and maximum differences are greater than any other planet except Pluto, which is no longer one.  One inner rotation takes about seventeen hours.  Two rotations take more than seventeen hours.