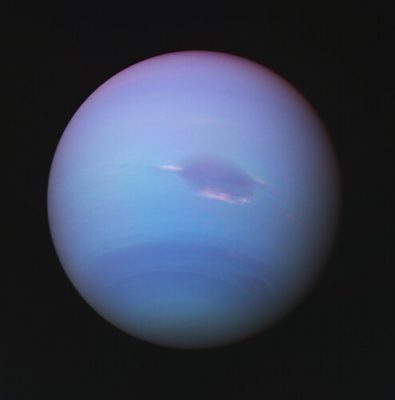 Neptune is the eighth planet in the Solar System.  It is the farthest away from the Sun after Pluto was downgraded to a dwarf planet.  Neptune is the third densest and the fourth largest.  The name is derived from the ancient Roman god Neptune, the god of the sea and fresh water.  Saturn is his father and Jupiter is his brother.  The Greek god equivalent is Poseidon.  Kurt Russell starred in a film called Poseidon (2006).  The motion picture was directed by Wolfgang Petersen (Troy (2004), Air Force One (1997), Das Boot (1981)).  Mr. Petersen knows how to work a camera.  Mr. Galle and Le Verrier know how to work a telescope.  Johann Galle and Urbain Le Verrier are credit with Neptune’s discovery.

Neptune is part of the exclusive ice giant club (i.g.c.).  Uranus is the only other member.  The surface gravity of Neptune is about 1.15 times Earth’s.  Big N’s equator has an estimated radius of fifteen thousand four hundred miles.  It runs four times the length of the Blue Planet’s.  The total Neptunian planetary mass is one nineteenth of Jupiter’s.  It has around seventeen times more than Earth.

The Sun is four and half billion kilometers from Neptune (30.1 astronomical units).  One Neptunian orbit takes about one hundred sixty-five years.  The first full barycentric orbit, since the discovery of the planet, took place on July 11, 2011.  Neptune was found in 1846.  The axial tilt is a little over twenty-eight degrees and similar to Mars’s (twenty-five degrees) and Earth’s (twenty-three degrees).  The planet has similar seasons to Earth as a result.  Each season lasts around forty Earth years.  A day takes about sixteen hours.

Uranus and Neptune have similar internal structures.  The Neptunian mantel is between ten to fifteen the size of Earth’s and abundant with methane, ammonia and water.  It is a dense and hot fluid, but considered to be ice in science terms (s.t.).  Like Uranus, it is referred to as an ammonia-water ocean and has a high electrical conductivity.  Ionic water molecules dissolve within the oxygen and hydrogen ions.  Somewhere in the mist of it, the theoretical extraterrestrial diamonds form.  A  silicate, nickel and iron core sit below the mantel.  It has a pressure two times as intense as Earth’s.

Eighty percent of Neptune’s atmosphere is hydrogen and nineteen percent is helium.  The remainder consists of methane.  The absorption of red light by the methane is what gives the planet its blue appearance.  The hues of the blue are more vivid than Uranus’s, even though both planets have a similar amount of methane.  Scientists do not know what the cause is.  An unknown factor is yet to be discovered.

Temperature drops the higher you move up the lower troposphere.  This layer of the atmosphere bleeds into the tropopause.  It acts as a barrier before the stratosphere where the temperature does the exact opposite of the troposphere (degrees increase with altitude).  The thermosphere is much higher and has lower pressure (one to ten Pa).  The exosphere sits at the very top.  It is the sole layer before the atmosphere is greeted by the cold void of space.

Clouds with various compositions form within different pressures in the troposphere.  When pressure is raised up to fifty bars, thick clouds of ice and water are shaped.  Ammonium sulfide and ammonia-based clouds form in regions with pressure above five bars.  Ammonia and hydrogen sulfide clouds exist between five and one bars of pressure.  Methane clouds live under one bar of pressure.

Diverse storm systems are the highlight of Neptune’s weather.  Wind speeds of one thousand three hundred miles per hour almost reach supersonic heights.  The speeds very in each area of the planet and move in the opposite direction of Neptune’s rotation. An anti-cyclonic storm system forms the Great Dark Spot.  It was discovered in 1989 by the Voyager 2 spacecraft and the largest of its kind on Neptune.  It spans over eight thousand miles and resembles the Great Red Spot on Jupiter.  A white cloud group named The Scooter is further south.  An extraterrestrial vortex called the Small Dark Spot is the second largest.  It is nicknamed Dark Spot 2 (ds2) and The Wizard’s Eye.

There are fourteen known moons orbiting Neptune.  They are divided into two groups.  The first cluster are the regular moons.  These are the seven inner ones that have circular prograde orbits.  Proteus is the second largest natural satellite and the largest of the regular group.  Hippocamp is much smaller and close by.  Larissa is the fifth closet to the planet and named after Larissa, the lover of Poseidon.  Galatea is the fourth from the planet and designated after one of the fifty Nereids (sea nymph in Greek mythology).  Despina was discovered in 1989 by Stephen P. Synnott.  The second innermost is Thalassa and Naiad is tidally locked to the planet and will eventually become a planetary ring.

The other group is made up of the irregular moons.  Nereid is the third largest Neptunian moon and is the proud owner of the most eccentric orbit in the entire Solar System.  Halimede has a retrograde irregular orbit.  Neso is the furthest from the planet.  Psamathe was found in 2003 and is nicknamed Neptune X.  Laomedeia is known as Neptune XII.  It was discovered in 2002.  Sao is about twenty-seven miles in diameter.  Triton is the largest and contains 99.5 percent of all of the mass in orbit.

A tenuous planetary ring system wraps around Neptune.  Carbon-based material and ice coated silicates are their foundation.  They have a red color and can be classified into three main rings.  Galle Ring is twenty-six thousand miles from the center of the planet.  It is the faintest.  Le Verrier Ring is around thirty-three thousand miles away and the broadest.  Adams Ring is the thinnest and has five prominent arcs.  Their names are Egalité 1, Egalité 2,  Fraternité, Courage and Liberté.  Their existence is due to the gravitational influence of Galatea.