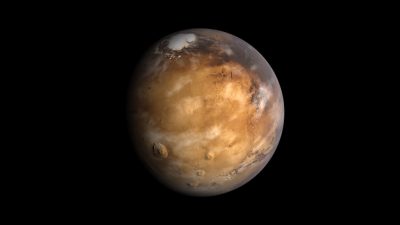 Mars is almost smaller than every planet in the Solar System.  Mercury is the exception.  It appears after Earth and is the fourth planet from the Sun.  Mars is called the Red Planet and named after Mars, the Roman god of war.  The Ancient Greek equivalent is Ares.  The surface of the planet has a reddish hue.  The color can be interpreted as bloodshed on a battlefield tied back to the nickname.  The Latin term for Mars is Martius.  It is the basis for the word martial (terrestrial equivalent) and martian (someone who lives on Mars).  Eating a Mars Bar is the basis for a good time.

The Sun is one hundred and forty-three million miles away from Mars. It takes the planet six hundred and eighty-seven (Earth) days to complete an orbit.   A solar day is thirty-nine minutes longer than an Earth day.  A year on Mars is about three hundred and twenty days longer than the Blue Planet.  The axial tilt is similar to Earth’s and causes reciprocal seasons.  They last twice as long due to the extra 320 days in a Martian year.

The surface temperature in the winter can drop to as low as negative two hundred and twenty-five-degrees Fahrenheit near Mars’s poles.  The temperature in the equator spikes up to ninety-five degrees Fahrenheit during the summer.  The thin atmosphere stores little to no solar heat.  This causes the large temperature variations between the seasons.  Dust storms are frequent and vary in size.  They can ravage a small area or ensconce the entire planet.  The dust storms on Mars make the planet hotter and are the biggest in the Solar System.  The speed of the storm can eclipse one hundred miles per hour.  Martians are advised to stay indoors when speeds hit triple digits.

The planet’s atmosphere is mostly carbon dioxide.  Over ninety-five percent is C02.  Argon and nitrogen make up the rest.  There are negligible levels of oxygen, water vapor, hydrogen, carbon monoxide and noble gases (Rn, Og, Xe, KR, He and Ne).  Neon lights run on noble gas, cars run on gasoline and America runs on Dunkin’.  The surface pressure of the atmosphere is a mere .088 psi on average and only one percent as dense as Earth’s.  It is thinning to this day due to gas leakage.

Auroras have been observed on Mars throughout the years.  The Mars Express (European Space Agency space exploration mission) spotted ultraviolet light from a magnetic umbrella in 1994.  It was found in the southern hemisphere and resulted from a billion-year-old decaying global field.  NASA uncovered an additional aurora in 2015 from a dust cloud and another in 2017.  The 2017 find was picked up from intense radiation levels after a solar storm.  The aurora was several times brighter than the previous two.

Mars is half as wide as Earth.  It is eleven percent of the mass and around fifteen percent of the volume.  The surface gravity is under forty percent of Earth’s.  The red color is due to iron oxide (rust).  Other minerals blend in brilliant browns, tans and greens with the reds.  Iron, aluminum, potassium, calcium and magnesium are the most common elements found in the Martian crust.  It is close to eighty miles at its thickest point and is thirty miles deep on average.  There is no global magnetic field, but various sections of the crust are magnetized.  Scientists believe it was caused by a former field that has dissipated over billions of years.

Geological activity is present on Mars.  There are traces of water and lava flows that transpired millions of years in the past.  In 2008, the Mars Reconnaissance Orbiter (NASA) spotted proof of an avalanche.  There are numerous periods of geological history, but they have been condensed into three main stages.  The first is the Noachian period that occurred over four billion years ago, when the oldest surfaces were scared by impact craters.  The period’s highlight was the formation of Tharsis, the volcanic plateau near the equator.  Lava plains sprouted on Mars three billion years ago in the Hesperian period.  The current period is the Amazonian period.  The surface meteorite damage happened during this phase.

Olympus Mons is an extinct volcano found on Tharsis.  It is the tallest mountain in the Solar System and extends about seventy-two thousand feet in the air.  It covers 120,000 square miles and is the width of France.  Mount Everest is two and a half times shorter.  Olympus Mons can be found in the western hemisphere of Mars.  There are two impact craters called Pangboche and Karzok.

Mars has two small moons.  Their names are Deimos and Phobos.  Little Deimos is seven and a half miles wide.  Bigger Phobos is fourteen miles in diameter.  They orbit near the planet and were discovered by Asaph Hall (1829 – 1907) in 1877.  The moons origin is unclear.  The standard capture theory of asteroids is accepted, but Phobos’s circular orbit near the equator is unusual.  Another line of thinking is that they could have been ejected from Mars itself.  Additional smaller and undiscovered moons are thought to be hiding in the orbit too.

Methane has been discovered on Mars.  It’s released from underground regions and appears in the atmosphere for up to four years.  The duration suggests that an active source is present.  It can be produced from microbial life or a non-biological process.  If life was the cause of the methane, it would be too deep under the surface for a rover to detect.  Humanity will have to find out the old-fashioned way, with a shovel.