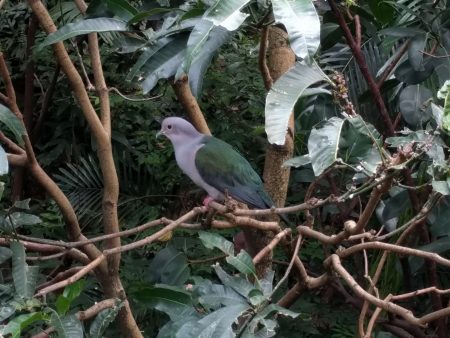 The Purple-tailed Imperial pigeon is a magnificent bird. They are not actually an emperor as their name suggests, but it is possible one of them rule over their peers in some medieval forest hierarchy in the lowland forests and foothills of New Guinea, where they are found.

The binomial nomenclature of the Purple-tailed Imperial pigeon is Ducula rufigaster.  Their diet consists of fruit and not blood.  Ducula is a genus of pigeons, also known as Imperial pigeons.  Dracula is the one that survives on blood.  Any sucking these noble birds do would result in a beak full of pulp.  They can swallow the fruit whole.  When they eat and digest the fruit, they leave the seeds intact.  This is crucial for the progeny of the trees.  These frugivores (feeding on fruit) are crucial for their habitat and play an important part in the ecosystem.  Steve Jobs used to sample fruit-based diets and ate only apples and carrots for a stretch of time.  He did create a company named Apple after all.

Purple-tailed Imperial pigeons, or PtIp for short, are plump birds with shorter than average wings and tails.  The sugar count in the fruits they graze may play a role in their plumpness.  A common street pigeon has no excuse.  They fatten from french fry consumption and chips and queso.  PtIps grow to be around 30-40cm and weigh over 400g. Their wings are brilliant green.  Their neck is a golden pink blend than lightens on their head forming a diminished purple color.  The top of their neck is splashed with light blue that also fills the tip of their tail.  The mass of the tail is deep purple, the color of royalty.  The color of purple dye (Tyrian purple) was rare in ancient history.  The only way to produce it was from cracking into the shells of thousands of sea snails.  This cemented its value and it was adopted by future ruling classes.

PtIps are arboreal (hanging out in trees) and like to hop around in their tropical lowland forest habitat.  They are camera shy and avoid the paparazzi.  The lack of observation is attributed to their day trips deep in the foliage.  In the depths of the leaves, they make haphazard twig nests in between adjacent branches.  They normally lay a sole egg with a short development period.  The chick is fed through wholesome crop milk and matures fast.  This gives the little guy or girl a survival boost and the freedom to move out of their parents’ castle.  Purple-tailed Imperial pigeons repeat this love session multiple times during the summer breeding season.

A note on crop milk:  Crop milk is a discharge from the lining of the crop of doves and pigeons.  The crop is a portion of their intestines that stores food prior to digestion.  The bird will fast before the egg hatches to eliminate any seeds. This is eloquently puked into the mouths of their young to provide sustenance.  The milk is produced in a limited supply and a main reason for the low egg count.  There isn’t enough to go around.

PtIps make traditional pigeon noises.  These include sudden booming clamors and the classic “coo-coo-coo” sounds.  Sometimes they “coo-woo”, “coo-woo-coo” and “woo-coo”.   If you are in the right place at the right time in the right forest of New Guinea, the legendary “woo-coo-coo” can be heard.  The “woo-coo-coo” (w-c-c)  is sought after by many, but experienced by few.

Purple-tailed Imperial pigeons are part of the Aenea species-group that is represented by D. aenea, the Green imperial pigeon.  The subgroup they reside in is the finschii subgroup.  They share this group with D. chalconota (Rufescent Imperial pigeon) and B. basilica (Cinnamon-bellied pigeon).  Rufescent is an adjective that means tinged with red or rufous  (dull-red).  These birds are like the PtIPs, but with some red slapped on the top of their wings.  The cinnamon-bellied pigeon looks less imperial, but has a delicious sounding name.

This is a full list of the Imperial pigeons, but the the PtIp is the best.

Here is the full Scientific classification of the Purple-tailed Imperial pigeon.

The International Union for Conservation of Nature (IUCN) Red List has listed the PtIp as LC (Least Concern) for endangerment.  There are nine groups: EX (Extinct – The species is gone forever),  EW (Extinct in the wild – only alive in captivity or outside of their native range), CR (Critically endangered – close to EW), EN (Endangered – high risk of extinction in the wild),  VU (Vulnerable – risk of extinction due to unnatural causes),  NT (Near threatened – pose a risk of extinction in the future), LC (Least concern – nowhere near extinction),  DD (Data deficient) and NE (Not evaluated).  This is great news for our royal-tailed bird.  If you run into one, remember to bow.