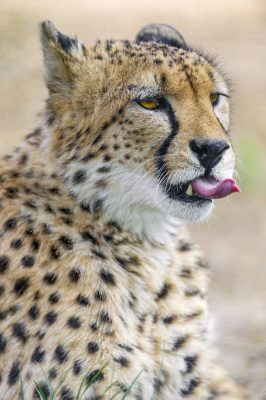 Cheetahs are serious students and they study hard.  Both eyes focus on their own paper during course exams.  They never wander.  A cheetah has a surplus of integrity and does not take shortcuts…unless savanna traffic is bad.

The cats are spotted and have a short snout and petite round heads.  Their legs are long and thin and so are their tails.  Black tear marks streak down the fur under their eyes.  They have a deep chest cavity and kind hearts.  A cheetah’s body ranges between four to five feet long and the tail dangles down two to three feet.  The weight range is disparate.  It varies between forty to one hundred and sixty pounds.  The males are heftier than females.

Cheetah fur is orange, brown and cream colored.  About two thousand solid black spots are sprinkled throughout their bodies.  The spots are about one to two inches in diameter.  They are evenly spaced.  The spotted pattern is unique to each cat.  The hair is coarse and short.  The belly hair is soft.  Males have a tenuous three-inch mane around their shoulders and neck.  Albino cheetahs are extremely rare, but a few have been spotted throughout history.

The head is smaller and rounder than other large cats.  The cheetah is built to move fast.  Their streamlined frame is designed for explosive short bursts of speed and they can accelerate while changing directions.  Their tail helps them pivot while doing so.  Small teeth and a large nasal passageway allow for sufficient air flow.  Oversized lungs and a large heart help enrich their blood with oxygen.  This aids in stamina recovery after a long chase.  Protracted claws and soft paws help navigate any terrain.

Cheetahs can attain a maximum speed between fifty and eighty miles per hour.  They are the fastest animal on land.  Average speeds of thirty miles per hour are common during a hunt.  The top speed is used to close the initial gap between them and their prey.  A process of deceleration happens once the distance shrinks.  Slower speeds are used to secure the kill.

Impalas, antelopes, wildebeests, jackals, gazelles, ostriches and kudus are all served at Café Cheetah (C.C.).  The portion sizes weigh between forty and one hundred and thirty pounds.  The most popular items on the menu are mostly under ninety pounds.  Cheetahs are carnivores.  Larger prey is killed in groups.  Hunting happens during the day.  Optimal feeding is during dusk and dawn.  They use their keen eyesight to spot their target.  Smell is not needed.

Cheetahs stalk their victims under the cover of the terrain.  Sometimes they hide for an ambush.  Once they are within a range of two hundred to six hundred feet, the chase begins.  It lasts up to a minute and then it ends.  When they are in range, they knock over their prey with their strong paws and bite the neck.  A cheetah exhale comes next and they pat themselves on the back before they drag the fresh food to a bush or tree.  The cat eats in quiet and will consume around ten pounds per day.

Social structures are complicated.  They always are.  Cheetahs tend to avoid each other, but males will fight over territory.  They always do.  The males are social animals.  The females are not.  Their children are their only companions.  Occasionally a band of males will join forces to secure a territory and guarantee access to mates.  The cheetah boys show signs of affection and do all of their activities together.  Cheetah boys will be boys.

The cats have a deep vocabulary of various sounds.  They include churring, chirping, bleating, coughing, meowing and the crowd favorite…purring.  Scent and urine are used to communicate too.  Females will use this to attract males.  Touching and grooming takes place during social gatherings.  The meet and greets are well renown and private affairs.  Cheetahs under the legal age are not allowed any libations.  Troublemakers that sneak a drink are grounded for at least a week, sometimes two.

A cheetah roams in elevations up to thirteen thousand feet and tend to stick outside of forests.  They prefer savannas and mountain ranges depending on their location.  A habitat with wide sight lines is preferred to stalk prey and avoid predators.  The wild cats live in smaller clusters that are often seventy to ninety percent less than lions and other large cats.  Most are found in southern and eastern Africa and the central deserts of Iraq.  There have been a few unconfirmed sightings in Iran, Pakistan and Afghanistan.   The global cheetah population is estimated to be slightly above seven thousand.

The agriculture industry and other commercial land use has splintered the cheetah population.  Invasive plant species and the shifting makeup of their habitat has had a negative impact.  The natural disturbances have reduced their prey count.  Poaching and farmers killing cheetahs to protect their livestock all add to the mounting list of the cheetah’s concerns (c.c.).  The end result is a listing of Vulnerable by the IUCN (International Union for Conservation of Nature) and an Appendix I categorization from the CITES (Convention on International Trade in Endangered Species of Wild Fauna and Flora) and CMS (Convention on the Conservation of Migratory Species of Wild Animals).