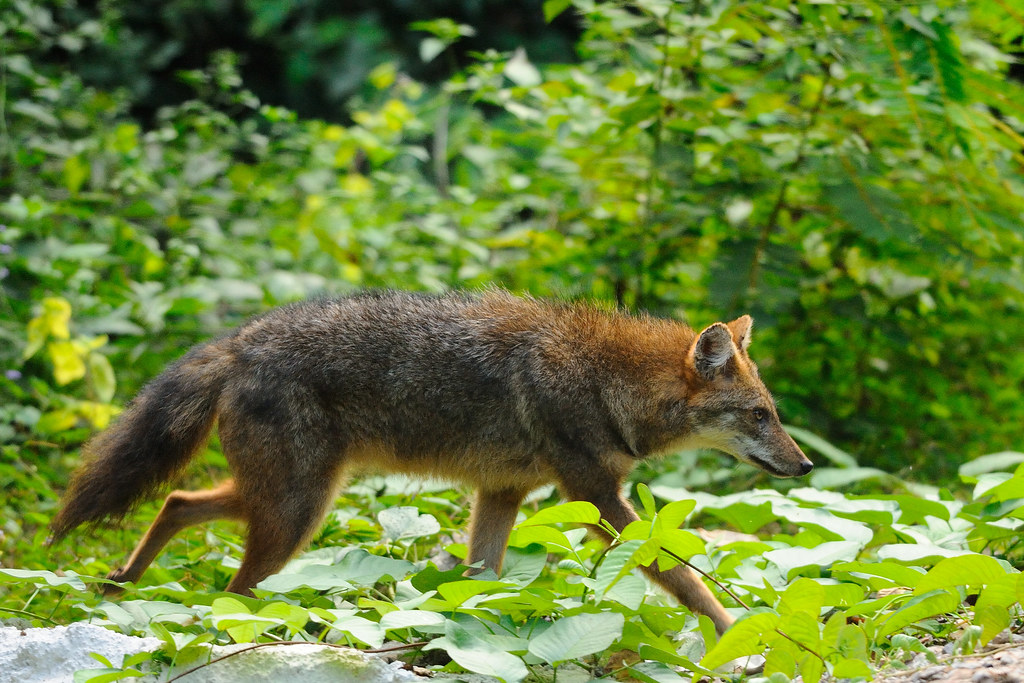 Golden jackals are comparable to the Arabian wolf and are the golden boys and girls of the Canidae family.  They are found throughout Europe and Asia.  The word jackal was added to the English language in 1600.  The term stems from the Turkish phrase çakal and Persian expression šagāl.  Other golden jackal pseudonyms are the Eurasian golden jackal, the common jackal and Asiatic jackal.

It all started with the Arno river dog.  Big Arno is an extinct canine species that was endemic to the Early Pleistocene that lived two million years ago.  The dog was the ancestor of all modern jackals, a jack of all trades.  The oldest evidence of the golden jackal was a single tooth fragment that was fossilized about seven thousand six hundred years ago.  Archeologists found it in Beirut, Lebanon.

The animal has a lightweight and elongated torso and a recessed forehead.  Short legs and a tail surround a pointed narrow muzzle.  Males measure between twenty-eight and thirty-three inches long.  The ladies extend between twenty-seven and twenty-nine inches.  They have an average weight in the range of fifteen to twenty-four pounds.  The fellas weigh up to thirty-one pounds. Both have a shoulder height of eighteen to twenty inches from the ground.

Their fur is short and coarse.  The base is a golden color that may turn cream and yellow with the seasons.  The back is an amalgam of brown, black and white coloring.  It looks like a saddle in certain species.  The underside of the jackal is a pale cream and ginger color.  Individuals can be distinguished by their unique chest and throat markings.  The tail is tan with a black tip.  Melanism is possible and does not come from interbreeding like their wolf and coyote brothers.  The all-black variants are due to and independent mutation that is thought to be an adaptive trait.  A solitary albino golden jackal was photographed in Iran in 2012.

The Canidae molts or sheds their coat once in the spring and again in autumn.  The process for the spring starts at the end of winter and lasts up to sixty-five days.  If the jackal is sick, they only lose half of their coat.  The autumn molt begins in the middle of September.  It starts with the rear and ends with the head.  The spring shedding is the exact opposite.

Golden jackals are monogamous and will mate with their partner until death.  One breeding cycle occurs each year.  It runs from October to March.  Mating begins and ends within twenty-eight days.  Gestation lasts a little over two months.  Birth overlaps with the abundance of food sources.  Two to eight pups are born.  The babies arrive with closed eyes that open after eleven days.  Their ears erect a few days later.  Teeth erupt sometime after.  Their fur is dark brown and gray.  A month passes and it is shed and replaced with red and black specks.  They eat meat on their twentieth day.

The siblings fight with each other after two weeks.  Their week jaw muscles prevent injury.  The friendly scuffles help them develop their running skills.  The contests heat up after two months.  The aggression helps establish the new hierarchy and the alpha.  Wounds may occur.  Scent marking is how they claim their territory.  Females reach sexual maturity right before they turn one.  Males obtain it sometime after two years.

The animal is both a scavenger and hunter that fills the same ecological niche in Eurasia that the coyote does in North America.  Some species have a diet that consist of sixty percent rodents, birds and fruit.  Others replace the birds with reptiles.  Vegetable matter fills in the remaining percentages.  Golden jackals hunt alone or in pairs.  Pack hunting is rare.  A keen sense of smell and hearing helps locate their prey.  They conceal themselves before approaching.  The prize is secured with leaping and pouncing actions.  Most of the pursuing occurs in the morning.

The wolf, jungle cat, wildcat, raccoon and red fox are the golden j’s main competitors.  The foxes fear the jackals due to the size difference.  Jackals eclipse the mass of the fox threefold.  Sometimes jackals attack humans.  The result is never fatal.  Those golden jackals are so cute, cute, but stern.