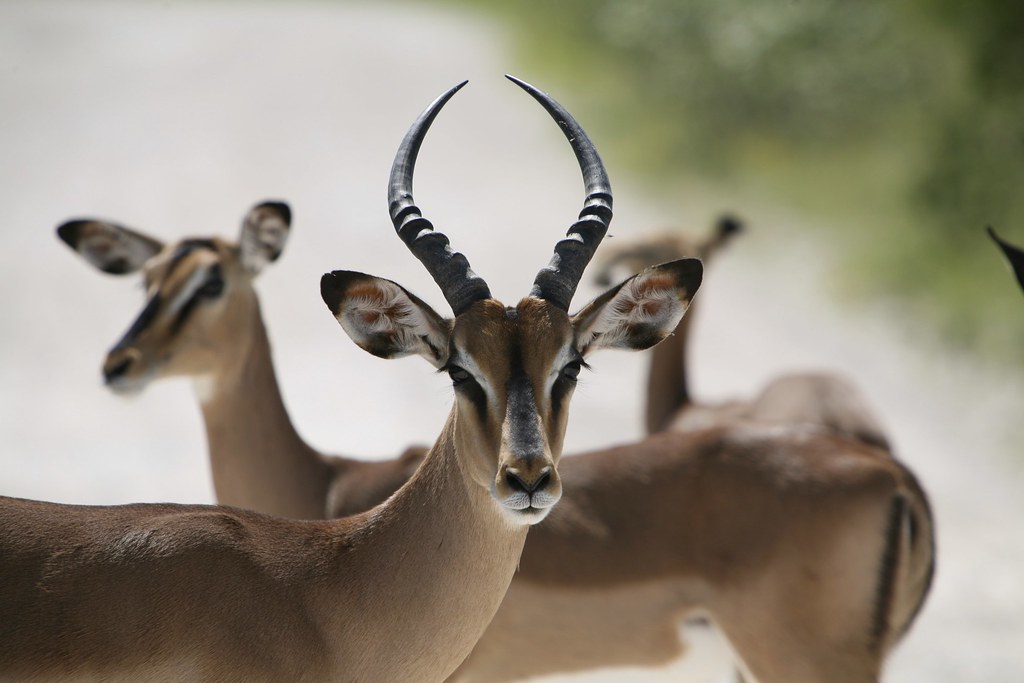 Impalas are antelopes from southern and eastern Africa.  They are the sole members of the Aepyceros genus that is part of the Bovidae family.  Bison, cattle, buffalo and other cloven-hoofed mammals are also bovids.  The German zoologist Martin Hinrich Carl Lichtenstein was the first to document the animal.  The year was 1812.  Two modern subspecies are recognized.  They are the black-faced impala and the smaller, common impala.

The scientific generic name Aepyceros is derived from the Ancient Greek words for high or steep, αἰπύς (aipus), and the word for horn, κέρας (keras).  Melampus is the specific name.  It translates to black-foot and stems from μελάς (melas or black) and πούς (pous, foot).  The original English word was pallah or palla.  It was coined in 1802 and initiated from the Tswana phrase for red antelope, phala.  The contemporary name impala has been used since 1875.

Do impalas have horns?

Female impalas are hornless.  Lyre shaped horns are adorned on top of the males.  They protrude one to three feet upwards.  The horns are ridged and circular and the base is hollow.  They protect the skull from damage and aid the animal in battle.  The coat is a combination of two colors.  Tan sides blend into a reddish brown back that clash with a white underside.  The chin and nose fur are white.  The same color is found circling the eyes. Black stripes run along the hind legs and backside.  The tail is a foot long.  It is bushy and white with a black streak through the middle.

Melanism is responsible for the black-faced impala’s coloring.  The mark runs on each side of the animal’s nose up to its forehead.  The ears are tipped with the same trend.  Their tail is thirty percent longer and wider.  Both subspecies are diurnal or active during the day.  Feeding occurs at night.  Impalas graze and browse depending on the availability of food sources.  Their diet consists of forbs, dicots, fruits and monocots.  The breakdown averages at forty five percent monocots and dicots, with ten percent fruit.  Grasses raise to ninety percent when the first rains begin.

Tough and tall grasses are avoided.  Nutrient laced soft grasses are preferred.  Browsing dominates their feeding habits during the end of the wet season.  Sustenance declines during the middle of the dry period.  The peripheral of the herd defends against predators.  The interior dines in safety.  Predators include leopards, lions, cheetahs, wild dogs and other carnivores.  Acrobatic jumps and maneuvering are used to mitigate onslaught.

There are three defined social groups.  They are split into bachelor, female and territorial male herds.  The territorial males protect their domain that houses a select group of female impalas.  Bachelors will faction into small groups with less than thirty members.  They stay around ten feet apart.  The juveniles and adults will intermingle.  Middle aged males will come together to spar.  The rascals depart afterwards.  The females thrive without an alpha and occupy large square footage.  The herd size varies and ranges between six to one hundred members.  Everyone is passionate about self-grooming.  It is important for communal interaction.  Impalas are the only ungulate that features this characteristic.

Males reach sexual maturity after they turn one.  Mating success is typically secured after four years.  Females can conceive before their second birthday.  The breeding season runs three weeks long during the wet season of May.  Male hormones begin to explode a month earlier.  The change causes aggressive outbursts and an emphasis on securing a territory.  The boys will fight during this period through a process called rutting.  Gestation lasts six to seven months.  Birth is delayed if the conditions are off.  A single calf is born.  They stay with their mother for three weeks.  Three to five months later the males join bachelor herds.  The girls take their time.

Impalas inhabit African woodlands.  They prefer the shade and locations near water.  Some meander into neighboring savannas during the dry season.  Predator population can also cause a shift in habitat.  The destruction of woodland cover by the African bush elephant has helped increase the availability of browsing sites.  The historical range spans throughout southern and eastern Africa.  The common impala has been introduced to protected sites in Gabon.  The IUCN classifies the subspecies as a species of least concern.  The black-faced impala has been flagged as a vulnerable species.  There are less than one thousand that roam the wilderness.  The common impala numbers are estimated to be two million; a two thousand to one ration.