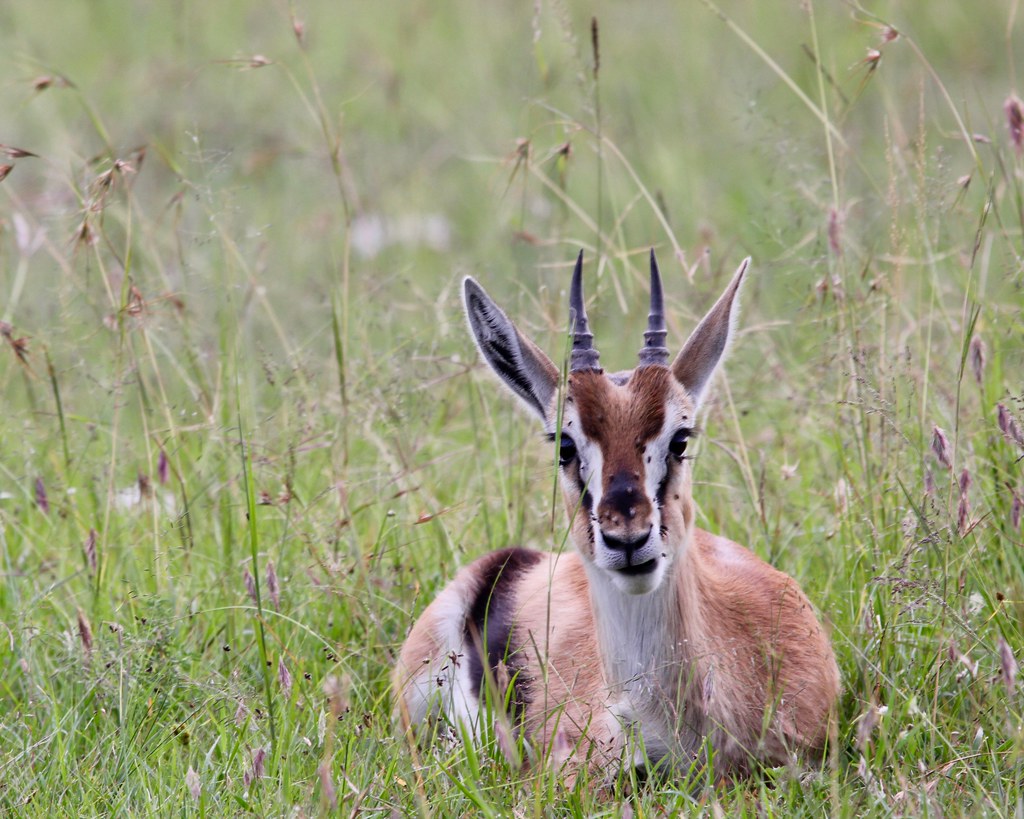 Thomson’s gazelles are one of the most common gazelle species.  They are named after the Scottish explorer and geologist Joseph Thomson.  The first recorded description of the animal was by the British herpetologist, ichthyologist (fish) and zoologist Albert Günther in 1884.  They are nicknamed tommie, tommy or tommy gun and members of the Eudorcas genus and Bovidae family that includes bison and buffalo.

The gazelles are somewhat small and have a shoulder height two feet to twenty-eight inches from the ground.  The females weigh between thirty to fifty-five pounds.  The males are larger and can exceed seventy-five pounds.  Both have white rings around their dark round eyes.  Thick black stripes run from the lower corner of the iris down to the nose.  A consistent rust colored patch travels from each horn along the top of the nasal passageway.  Brilliant white fur separates the brown and red runways.

A six-to-eleven-inch black tail sits behind the Thomson’s gazelle.  It is connected to a rufous and sand colored coat.  A wide black band runs beneath the reddish, brown layer between the forelegs and hind legs.  Their underside and the interior of their legs are white.  Refined preorbital glands sit near the males’ eyes and produce a scent used for marking territories.  Both genders have ringed horns that curve backwards at a gentle angle.  The boys’ horns develop up to seventeen inches.  The ladies stop growing at a half foot. Some are hornless.

The animals live in the grasslands and savannas of East Africa.  They prefer shorter grass with arid and solid foundations.  They will migrate into taller brush and woodlands when convenient.  The gazelles are mixed eaters and survive off of fresh vegetation during the wet seasons.  They browse plants, brush and foliage for sustenance during the drier months.  Thomson’s in the Serengeti will dine in the wake of the blue wildebeests and plains zebras after they mow down the higher grass.

Cheetahs are the villains.  They can reach higher speeds over short distances.  The predator cannot diverge from the direct path of their attack.  The lunge is between sixty-five to seventy-five miles per hour.  The Thomson’s gazelles have a range around fifty to sixty miles per hour.  It defends itself by maintaining the speed over a longer period of time while maneuvering with quick, successive turns.  Their agility allows them to live for up to fifteen years assuming they can also escape the pythons, crocodiles, eagles, baboons and jackals that writhe in the background of the grasslands.

The males will court a female after detecting her readiness through urine (Flehmen response).  Gestation lasts up to six months.  The mother will leave the herd and give birth to a single fawn (two are possible).  She licks her spawn clean to spread her scent and help the newborn’s blood circulate.  Nursing occurs daily.  The mother will protect her child from small predators by headbutting the aggressor with her horns.  She is defenseless against larger foes.

The fawn spends their early days in hiding.  They join their mother out in the open after two months.  Solid food is introduced as they ween away from nursing.  The pair joins the herd.  The young females are able to seamlessly integrate.  The males are harassed by territorial adults after reaching adolescence.  The mothers may protect their kin, but will stop when their sons are banished.  The isolated male will join a bachelor herd and carve their own path into adulthood.

Females form groups and enter the male territories with the most resources.  The boys respond by isolating a chosen few.  Hierarchy among the bachelors is decided through combat.  Adults display dominance through rituals.  Territory borders provoke mock fights among their thresholds.  No touching occurs and the limits are respected.  Both sides depart after grazing near each other.  There is no victor.

The total Thomson’s gazelle population is over five hundred thousand.  It has declined by sixty percent over the last thirty years.  Habitat changes and modern road development have had a great impact.  The effect of forest fires has contributed too.  The IUCN Red List has marked the gazelle as a species of Least Concern, despite the modern and natural dangers of the great Serengeti…cause for confetti.