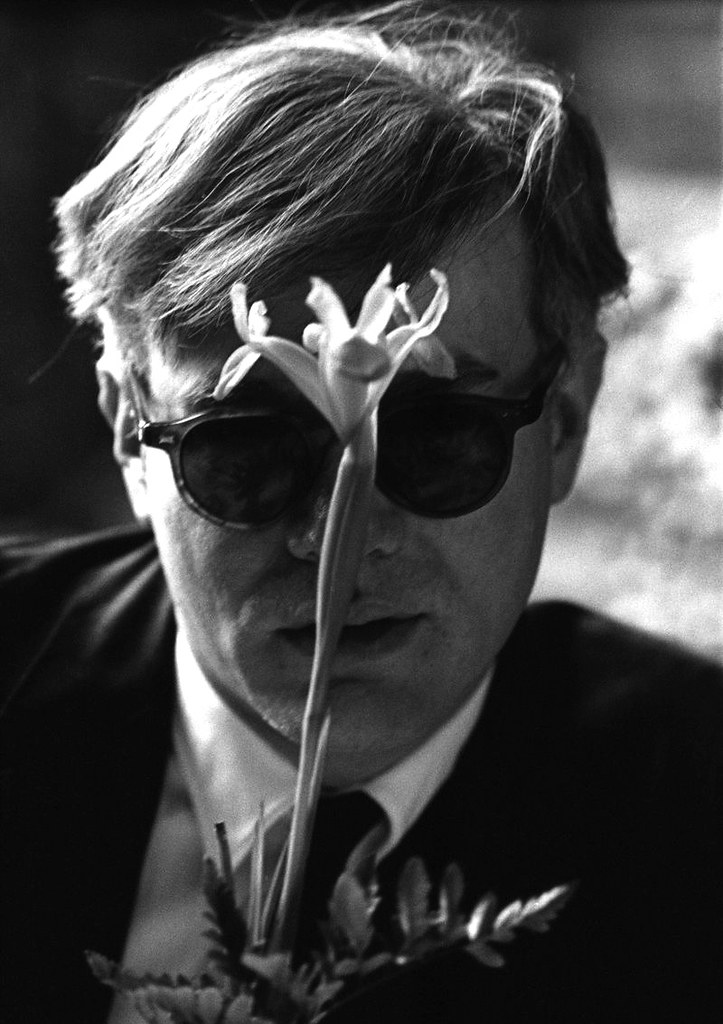 Andy Warhol was born in Pittsburgh, Pennsylvania on August 6, 1928.  His given name was Andrew Warhola.  He was a director and a pop artist.  His subject matter often portrayed celebrity culture.  Andy Warhol’s parents immigrated to the United States from an area that is considered Slovakia today.  Their names were Julia and Ondrej Warhola.  Andy was their fourth child.  Ondrej worked in a coal mine.

Warhol was diagnosed with the nervous system disease Sydenham’s chorea in third grade.  The affliction sometimes kept him bed ridden during his childhood.  He would collect pictures of movie stars and listen to the radio when he was stuck inside.  He later attributed this time period as a fundamental experience in his artistic development.  Ondrej Warhola passed away when he turned thirteen.

Andy graduated in 1945 from Schenley High School.  He received a Scholastic Art and Writing Award and set his sights on college.  Warhol attended Carnegie Mellon University in Pittsburgh and studied commercial art.  He graduated in 1949 with a Bachelor of Fine Arts in pictorial design and moved to New York City.  His career began in the advertising art industry.  Glamour magazine commissioned his first commercial artwork.  It was a drawing of shoes.

The years passed and Warhol enhanced his skillset during the 1950’s.  He utilized and refined the silk screen printmaking process in his paintings.  He would blot fresh ink on the paper and create blotted lines.  The paper was copied afterwards and the result was an infinite amount of similar, but diverse images.  Andy traced several photographs with the use of a projector.  He added his own interpretation to the shadowing that augmented the beauty.  His fame increased and he was hired to design album covers and promotional posters.

His first two gallery showings were in New York City at the Hugo Gallery and the Bodley Gallery.  The first Warhol exhibit in California was in the summer of 1962 at the Ferus Gallery.  His infamous Campbell’s Soup Cans were featured.  The artist transitioned into a pop artist after California.  He created beautiful images of ordinary American objects and celebrities.  His paintings featured everything from Coca-Cola bottles and dollar bills to Elvis Presley, Elizabeth Taylor, Marlon Brando and Marilyn Monroe.  Andy Warhol founded his studio The Factory around the same time.

The Factory was known as the Silver Factory and served as a congregation point for writers, artists, musicians, celebrities and the esoteric.  The parties that blossomed between its silver painted walls became notorious.  The regulars starred in countless films that Andy created   Warhol used assistants to increase his artistic output and mass produce his art in the 1960’s.  The method was controversial and one of his defining characteristics.

The radical Valerie Solanas shot Warhol at The Factory on June 3, 1968.  His injuries were critical and he suffered side effects for the remainder of his life.  The ordeal influenced his artwork and outlook.  The perpetrator was a paranoid schizophrenic and the incident marked the end of The Factory era.

Warhol’s life quieted down in the 1970’s.  He focused on his business and sought the company of wealthy patrons who commissioned his work.  Mick Jagger, John Lennon, Dianna Ross and Liza Minnelli were some of his benefactors.  Andy and Gerard Malanga founded Interview magazine.  It was relaunched in 2018.  His portrait of Mao Zedong was created in 1973.  It was titled Mao and received critical acclaim.  He founded the New York Academy of Art in 1979 with his art collector friend Stuart Pivar.

The 1980’s ushered in continued financial success.  His work was admired, but he drew criticism for being a business artist.  Warhol’s fame reached new heights when he befriended the Neo-Expressionists in New York that included David Salle, Jean-Michel Basquiat and Julian Schnabel.  He networked with Enzo Cucchi and Francesco Clemente.  They were members of the Transavantgarde movement, a European Neo-Expressionist equivalent.  Basquiat and Warhol fostered a famous friendship and collaborated together.

The Sarajevo Winter Olympics selected Warhol, Cy Twombly, David Hockney and thirteen other artists to create prints for the games.  Their Speed Skater piece was used as the official poster.  Vanity Fair hired Andy in 1984 to paint a portrait of Prince to supplement an upcoming article dedicated to him.  Orange Prince (1984) was the result and featured similarities to his previous series of Marilyn Monroe from the Sixties.

Andy Warhol was recovering from a gallbladder surgery in New York Hospital.  The operation was delayed due to his fear of doctors and hospitals.  He passed away on February 22, 1987 from an irregular heartbeat.  His family sued the hospital for malpractice and the case settled out of court.  A later study concluded that the procedure was riskier than anticipated.  His gunshot wound from earlier contributed to the danger of the operation.  He was buried in the St. John the Baptist Byzantine Catholic Cemetery in Pittsburgh.

In 2007, one of Warhol’s Large Campbell’s Soup Can (1964) paintings sold for seven million four hundred thousand dollars.  A self-portrait (1964) went for over thirty-eight million and Double Elvis [Ferus Type] (1963) fetched around the same.  His diptych Silver Car Crash (1963) earned around one hundred five million dollars at the end of 2013.  It was estimated to go for eighty million before the auction.  Triple Elvis (1963) made almost eighty-two million dollars at a New York auction held in 2014.  Andy Warhol’s art is still enjoyed today.

“Art is what you can get away with.”