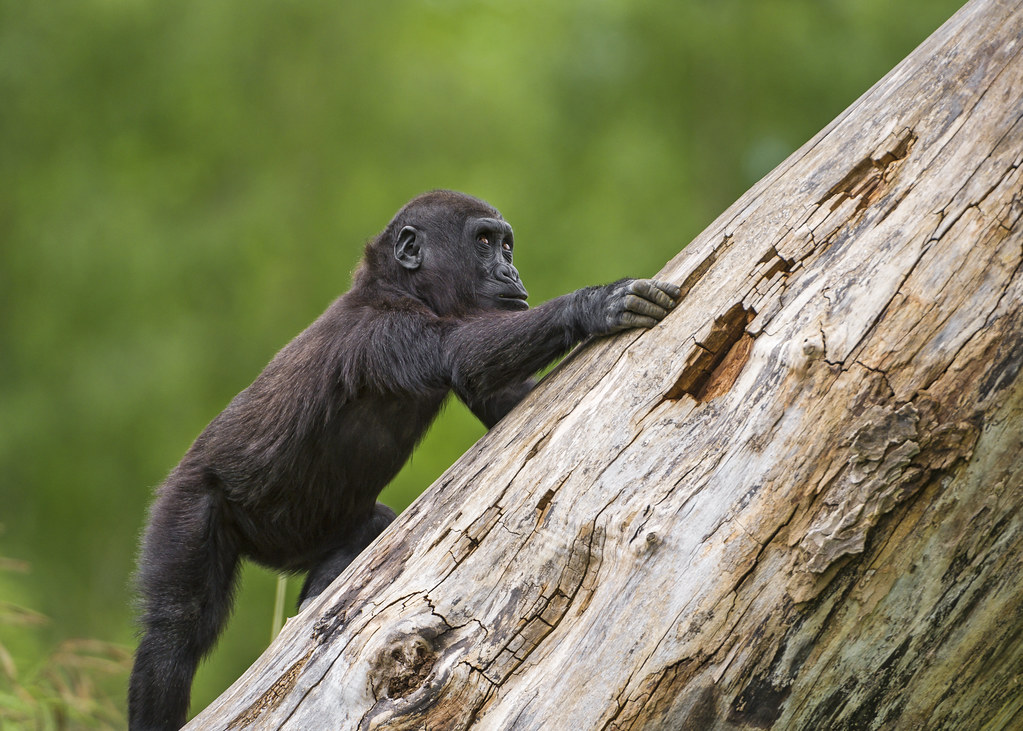 Gorillas are apes from Africa.  They are herbivores and mostly eat plants.  Gorillaz are musicians from London, England.  They are a virtual band that eats beats.  Hanno the Navigator coined the term gorilla.  He was a Carthaginian explorer that investigated west Africa.  The surveyed terrain later became Sierra Leone. The group ran into various feral humans and apes that the interpreters called Gorillae.  The word evolved from their descriptions.

The first western gorilla specimen was logged in Liberia by naturalist Jeffries Wyman and physician Thomas Staughton Savage in 1847.  The pair labeled the animal as Troglodytes gorilla, using the chimpanzee’s genus.  The species branding originated from the Ancient Greek word Γόριλλαι (gorillai).  It translates to a “tribe of hairy women”.

All species and subspecies of the primates are listed as critically endangered (CR) on the International Union for Conservation of Nature (IUCN) Red List.  It is the gravest designation for an animal in the wild.  Close to three hundred sixteen thousand Western Lowland gorillas exist in nature.  Four thousand thrive in various zoos.  Their eastern counterparts have a slim population of five thousand.  Twenty-four live in captivity.  The Mountain gorillas are the rarest.  Under nine hundred animals inhabit nature.  Zero live in menageries.

The Congo River separates the Western and Eastern Lowland gorillas.  They both live a variety of elevations and habitats.  The Eastern apes run around the swamplands and submontane and montane forests between two thousand and thirteen thousand feet high.  The Western monkeys thrive in the lowland swamp forest and montane forest. Their terrain reaches elevations up to five thousand two hundred feet.  Cross River gorillas sit below in forests as low as five hundred feet.  Mountain gorillas live in the…mountains.

Females weigh up to two hundred fifty pounds.  The boys grow three hundred to five hundred pounds.  They have an arm span between seven to eight feet six inches long.  Males stand around four feet seven inches to six feet tall.  Females reach up to four feet eleven inches.  The ladies have shorter arms.  Adult males are called silverbacks due to dense silver hair that runs along their back.  The pseudonym went through several iterations and took centuries for scientific approval.

Mountain gorillas have the thickest and darkest fur.  The Eastern fur tone comes in second.  Western gorillas are sometimes brown and gray with a red forehead.  They all have fingerprints and move about by knuckle-walking.  The apes may walk upright when they go on the defensive or carry food.  Their average lifespan is thirty-five to forty years.  Captive gorillas live up to fifty years.  The oldest on record was sixty.

Gorillas rarely consume water.  Their plant-based diet contains vegetation made up of fifty percent water.  Sometimes they eat fruit and on rare occasions bugs.  They hang out and sleep in simplistic nests made out of leaves and branches.  They prefer their makeshift beds over the ground.  Humans and leopards are their only predators.

Maturity is reached by the age of twelve.  Females have a gestation period of eight and a half months.  They start to give birth at ten years of age.  Gorillas will mate year-round.  Mothers are important for a baby g’s survival.  Males will protect the children.  Adolescents will leave their mother’s side after twelve months.  They increase their distance over the next two years until they become juveniles.

Gorillas live in packs called troops.  One male silverback protects multiple females and their young.  Sometimes there are more.  The male offspring will leave and form their own troops.  Rumbles, roars, screams, grunts and barks are used to communicate.  There are twenty-five recognized sounds.  Chest beating occurs when there is enough chest to beat.  Smaller animals make higer frequency sounds than larger ones.

The troop’s decisions are decided by the silverback.  He will lead the others to new feeding grounds and handle general security.  The younger males serve as backup protection.  The females form strong bonds with their leader.  Harmless squabbles occur.  Poking fun at ape pattern baldness is no joking matter.  Females are aggressive with non-family members, but the silverback maintains the peace.

Tool use is common.  Sticks are used for gauging the depth of water and stumps are utilized as bridges.  Rocks are used as weapons and for cracking nuts.  Gorillas are smart.  Their intelligence allows them to lead emotional lives and form strong bonds.  Some scientists believe that they harbor spiritual and religious sentiments.  They are capable of learning sign language and sarcasm.