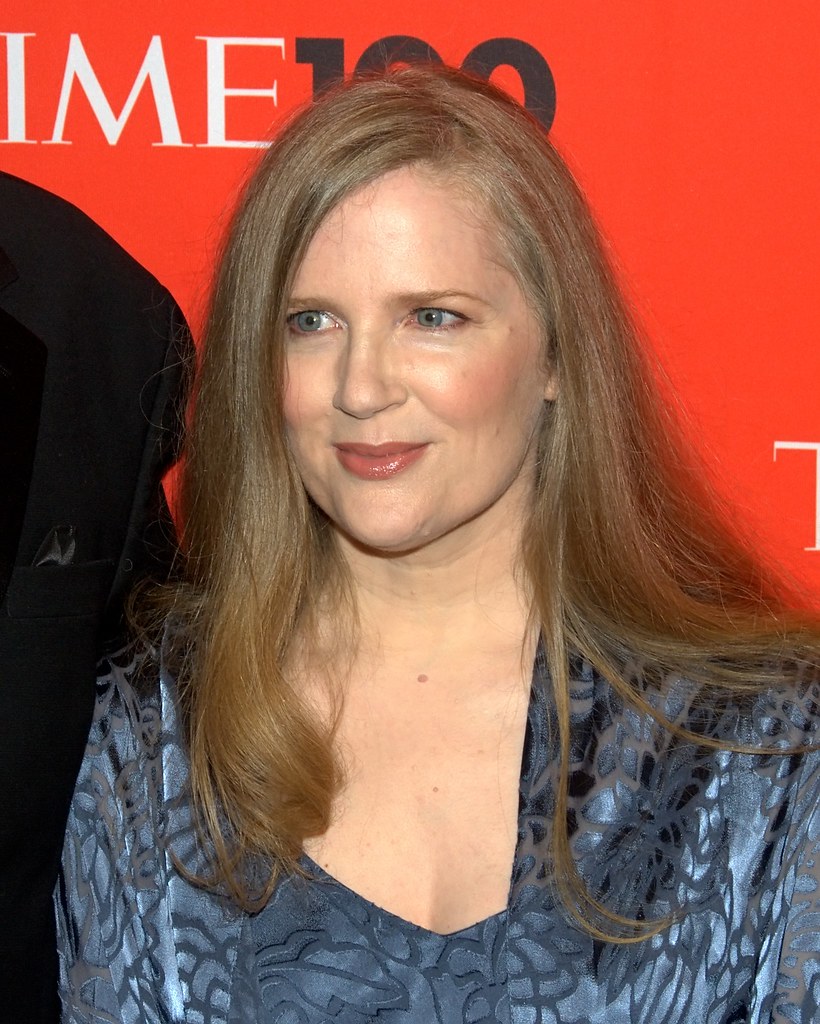 Suzanne Collins was born on August 10, 1962 in Hartford, Connecticut.  She is a best-selling author and unrelated to Phil Collins.  Her parents are Jane and Michael Collins.  Papa Collins was a colonel in the U.S. Air Force and served in the Vietnam and Korean War.  Suzanne has three older siblings named Joan, Andrew and Kathryn.  The Collins family moved around the country when she was a child.  Suzanne Collins attended the Alabama School of Fine Arts for college.  She graduated in 1980.  She received another degree from Indiana University Bloomington in 1985 and completed her Master of Fine Arts from New York University Tisch School of the Arts in 1989.

Suzanne started her professional career writing for children’s television programs in 1991.  She contributed to the Nickelodeon shows Little Bear, Oswald, Clarissa Explains it All and The Mystery Files of Shelby Woo.  Collins is sometimes falsely credited as the author of Little Bear.  Time passed and she became the head writer for Clifford’s Puppy Days.  The show was produced by Scholastic Entertainment.

The Writers Guild of America nominated her for writing on a Christmas special titled Santa, Baby!.  She moved to Kids’ WB and wrote for the show Wonderland.  She met the children’s writer James Proimos during her work with WB.  She received inspiration and encouragement and penned five novels between 2003 and 2007.  They accumulated into The Underland Chronicles (Gregor the Overlander, Gregor and the Prophecy of Bane, Gregor and the Curse of the Warmbloods, Gregor and the Marks of Secret, Gregor and the Code of Claw).

The Underland Chronicles follow Gregor and his journeys in the Underland, which is located underneath New York City.  Several giant and intelligent creatures roam throughout the land.  The human population is made of partially albino humans.  They were descended from the Overlanders and migrated underground a half century before the novel begins.

The people underneath New York City have lost the ability to produce advance weaponry and battle with arms of the past.  They farm and raise livestock like the people above and speak a variation of English.  Their use of and expertise in medicine is more advanced than what is on the surface.  A concept of bonding is what perpetuates their existence.

The creatures in the Underland are split into different factions that are at constant war with each other.  The bats (fliers) and mice (nibblers) are allied with the humans.  The trio’s enemy are the rats (gnawers).  The ants (cutters) hate all of the warm-blooded creatures.  Other species keep to themselves and are not fond of the humans.  The humans act without worrying about the effect of the cause.

Suzanne Collins followed The Underland Chronicles with a trilogy.  It was released through Scholastic Press and called The Hunger Games (The Hunger Games, Catching Fire and Mocking Jay).  The setting of the series takes place in a dystopian future in a post-apocalyptic nation called Panem.  The capitol of the city is located somewhere in the Rocky Mountains in North America.

The capitol of Panem is wealthy in a world where starvation plagues the common population.  The proletariat is split into numerous districts.  An uprising occurred to counter the abysmal conditions.  The capitol squashed the rebellion and created an annual competition as punishment.  The event is known as the Hunger Games and places a girl and boy from each district against each other in a battle to the death.  The participants are known as tributes.  The sadistic event is televised and the winner’s home district is rewarded with riches, supplies and of course…food.

The Hunger Games was inspired from the classic ancient Greek myth of Theseus and the Minotaur.  The legend tells the story of how Athens was forced to sacrifice seven boys and girls in a labyrinth to battle against a minotaur.  Suzanne Collins also used the Roman gladiator games as a muse.  The games were founded on the premise of a deathmatch in an arena for entertainment.  Other parallels can be found in the Japanese novel Battle Royale by Koushun Takami that was published a decade before her first book in the series.  A cult classic film with the same name was released shortly after Takami’s book and reached a global audience.

The Hunger Games stayed on The New York Times Best Seller list for over sixty weeks.  One million five hundred thousand copies of the first two books were printed in a little over a year.  All three novels have had a film adaptation and Mockingjay was split into two parts.  Jennifer Lawrence starred as the main character.  The Ballad of Songbirds and Snakes was released in the middle of 2020.  The story is a prequel to The Hunger Games trilogy and set in the same fictional universe.  Lionsgate has confirmed that a movie is in development.  Suzanne Collins is married and has two children.  Her beloved work is read by millions.

“Telling a story in a futuristic world gives you this freedom to explore things that bother you in contemporary times.”