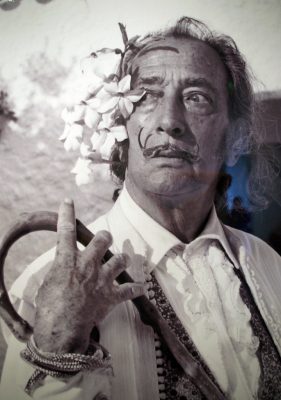 Salvador Dalí was born on May 11, 1904 in Figueres, Catalonia, Spain.  His full name was Salvador Domingo Felipe Jacinto Dalí i Domènech.  Dalí’s dad was a lawyer.  Double “D” was strict and also named Salvador.  Felipa was the matriarch and encouraged little Salvador to pursue his interest in art.  He had a little sister named Anna Maria.  She was three years younger.  Dalí’s older brother passed away before he was born.  His death haunted and inspired Salvador throughout his career.

Salvador enrolled at the Municipal Drawing  School in Figueres in 1916.  His work was displayed to the public at the Municipal Theater in 1918.  In the beginning of 1921, Felipa passed away from cancer.  Salvador was sixteen at the time.  He later claimed it was the greatest suffering of his life.  Dalí’s father remarried his departed wife’s sister sometime later.  Salvador had a great respect for his aunt and harbored no resentment.

Dalí attended the Real Academia de Bellas Artes de San Fernando in Madrid.  The San Fernando Royal Academy of Fine Arts had a storied history.  The alumni included Pablo Picasso as a student and Francisco Goya as a director.  Salvador Dalí moved into the Student’s Residence (Residencia de Estudiantes) in 1922.  He formed several friendships with other avant-garde pupils and spent a significant time at the local Prado Museum (Museo Nacional del Prado).  Salvador would roam the halls each weekend.  He would take notes and analyze the paintings of former master painters.

His painting Cabaret Scene (1922) was noticed by his fellow students.  The scene was an experimentation with Cubism during a time when there were no Madrid based Cubist artists.  Salvador Dalí continued to learn and was inspired by Dadaism and Futurism.  He absorbed the works of Sigmund Freud and the poet Comte de Lautréamont.  Both authors influenced his artwork.

Eleven pieces by Dalí were shown at a group exhibit (Sociedad Ibérica de Artistas) in Madrid in 1925.  Seven of the paintings were Cubist and it was a critical success for him.  His first solo show was held during November of the same year at the Galeries Dalmau in Barcelona.  It was also well received by the pundits and marked his preexposure to surrealism.  Salvador traveled to Paris in 1926 where he met his idol, Pablo Picasso.  The works of Joan Miró and Picasso helped evolve his art as he developed his own style.  Miró would later introduce him to several of the Surrealists.

Dalí dropped out of The San Fernando Royal Academy of Fine Arts in 1926 before taking his finals.  He was featured at the Galeries Dalmau again in 1927.  Over twenty pieces were displayed.  Surrealism became his main focus as the year progressed.  The evidence is in his paintings Apparatus and Hand (1927) and Honey is Sweeter than Blood (1927).  Both were littered with symbolism and contained elements that would become the archetype of the movement.  The iconic mustache sprouted up on Salvador Dalí sometime before the 1930’s.  The immaculate facial hair was groomed into a trademark.

Salvador Dalí and his muse

In 1929 Salvador met his muse.  Her name was Gala and she was ten years older than him.  The couple married in 1934.  Papa Dalí disproved of their relationship and his son’s involvement with the Surrealists created a chasm between them.  It took several years for the father and son to reconcile their differences.

The Persistence of Memory was painted in 1931.  It featured a series of melted clocks and is one of Dalí’s most recognizable pieces.  He had two exhibitions at the Pierre Colle Gallery in Pairs that were well received.  Salvador shot across the ocean and was shown at the Julien Levy Gallery (New York) in 1932.  The Persistence of Memory was included in the exhibit before if found a permanent home at the Museum of Modern Art (MoMA) in 1934.

The MoMA included Salvador Dalí in their Fantastic Art, Dada, Surrealism exhibition in 1936.  His paintings generated large crowds and his fame steadily increased.  Time magazine put him on their cover in December of the same year.  Salvador met Freud in 1938 and sketched his portrait.  Coco Chanel invited Dalí to her estate on the French Riviera a few months later.  The young master painted her several times.  The resulting artwork was featured at a New York exhibition in 1939.

A joint showcase with Joan Miró was displayed at the MoMA in 1941 to 1942.  Forty-two paintings and sixteen drawings were submitted by Dalí.  He published his autobiography The Secret Life of Salvador Dalí in 1942 and a novel titled Hidden Faces in 1944.  The autobiography performed well.  The novel did not.  His sister Anna Maria wrote a book named Salvador Dalí seen by his Sister in 1949.  It casted the painter in and unfavorable light that created a rift between him and his family.

Gala and Salvador spent the next several decades between Paris, New York and Spain.  Dalí continued to create art throughout several mediums.  His health deteriorated by 1980 and Gala passed away in 1982.  Salvador created his last painting The Swallow’s Tail in 1983.  Depression set in after his wife’s death.  The creation stopped.  A pacemaker was implanted in 1986 and he was hospitalized in 1988.  On January 23, 1989, he died of heart failure at the age of eighty-four.

Salvador Dalí’s bombastic personality left a lasting impression on the art world.  His work has influenced several modern artists and films today.  Two museums are devoted entirely to his works.  They are the Salvador Dalí Museum in St Petersburg, Florida (United States) and the Dalí Theater-Museum in Figueres, Catalonia (Spain).

“Surrealism is destructive, but it destroys only what it considers to be shackles limiting our vision.”