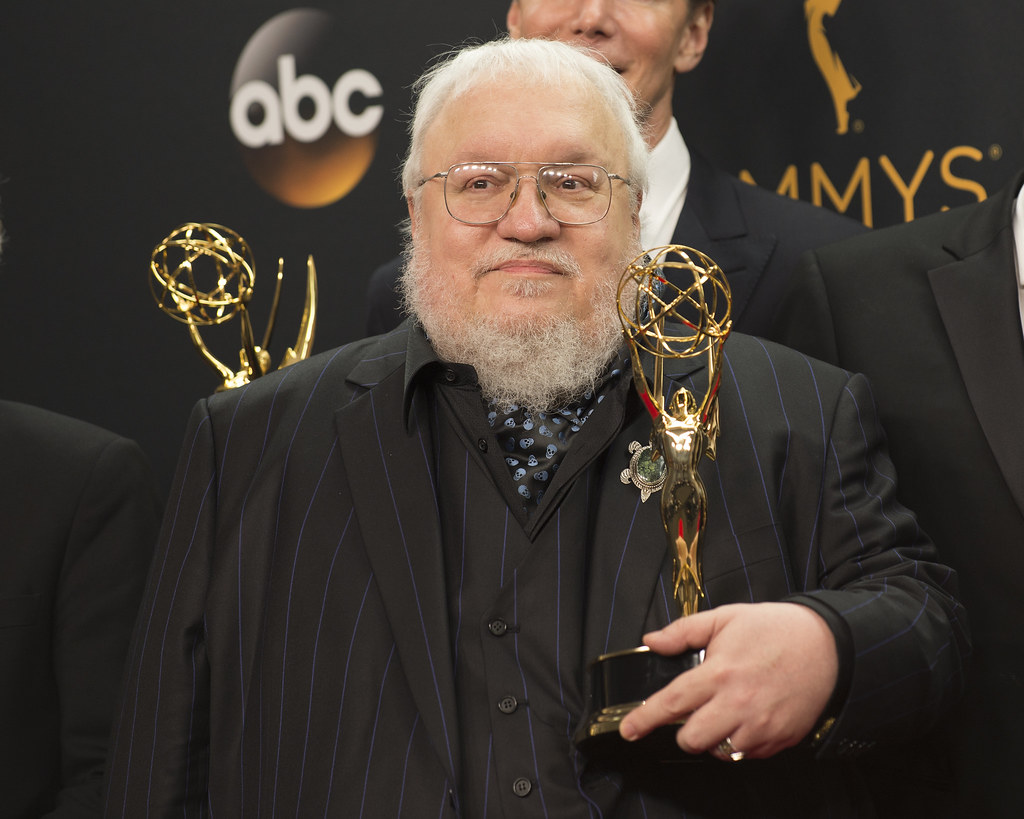 George R. R. Martin is a producer, screenwriter and novelist.  He was born on September 20, 1948 in Bayonne, New Jersey.  The two R’s stand for Raymond Richard.  His parents were Raymond and Margaret Martin.  He has two younger sisters named Janet and Darleen.  The Martins moved to a federal housing project in 1953.  George was an avid reader and writer.  He sold his stories to the neighborhood children for pennies.

In 1973 George’s story With Morning comes Mistfall was published in Analog magazine.  It was recognized at the Nebula Awards and nominated for the Hugo Award.  He worked as a chess tournament organizer on the weekends and concentrated on his writing during the week.  The chess craze between 1973 and 1976 ended and Martin worked as a teacher.

Clarke University was his home for the next four years.  He taught journalism and English before becoming a Writer in Residence.  His first novel Dying of the Light was published in 1977.  The unexpected death of his friend and colleague Tom Reamy disturbed the writer.  The event was a catalyst.  George R. R. Martin decided to pursue writing full-time.

He left the winters of Dubuque for the warmer landscape of Santa Fe, New Mexico in 1979.  The writer wrote.  Time passed and several novellas were published.  The most successful was Nightflyers.  The horror/science fiction hybrid was published in 1980.  The television rights were purchased in 1984.  The film Nightflyers (1987) was co-written by Martin and the producer Robert Jaffe.  The film was unsuccessful, but nourished his career.

Fevre Dream debuted in 1982.  It was a modern take on the vampire novel and received critical praise.  The Armageddon Rag (1983) followed.  The horror story was a commercial failure and his next book was rejected by publishers.  It was the low point of his career.  He moved to Hollywood to explore television writing.  He worked on The Twilight Zone and other shows.

A Game of Thrones

In 1987 George published various short stories.  He wrote screenplays and television pilots.  They failed to reach the screen and faced several forced edits.  The itch of the novel returned.  The author decided on a fantasy epic.  His vision was a three-part collection inspired by The Accursed Kings, Wars of the Roses and Ivanhoe.  His opus began.

A Game of Thrones hit bookstores in 1996.  A Clash of Kings (1998) arrived two years later.  A Storm of Swords (2000) followed in two more.  The fourth was titled A Feast for Crows (2005) and climbed to number one on The New York Times bestsellers list.  A Dance with Dragons (2011) did the same.  It stayed on the list for an imposing eighty-eight weeks and made the final ballot of the Hugo Award for science fiction and fantasy.  The Winds of Winter and A Dream of Spring are set to be released in the future and will bring the A Song of Ice and Fire blockbuster to a total of seven novels.

The rights for the saga were purchased by HBO in 2007.  The first season of Game of Thrones debuted in 2011.  Martin was involved in the production and adaptation.  It was nominated for thirteen Emmy Awards and won two.  Season two released a year later and was nominated for twelve.  It won six.  The fifth and six seasons won another dozen Emmys that included Outstanding Drama Series.  The eighth and final season aired in 2019 and contained six episodes.

George R. R. Martin is opposed to the creation of fan fiction of his work.  He states that the practice develops bad habits and prevents the writer from increasing their own skills in character development and setting.  Martin is known for his accessibility to fans and convention appearances.  He is a fan of the New York Mets, Giants and Jets.  His favorite band is the Grateful Dead and their psychedelic rifts have permeated his works.  The writer continues to create from his home in Santa Fe, New Mexico today.

“A reader lives a thousand lives before he dies, said Jojen. The man who never reads lives only one.”