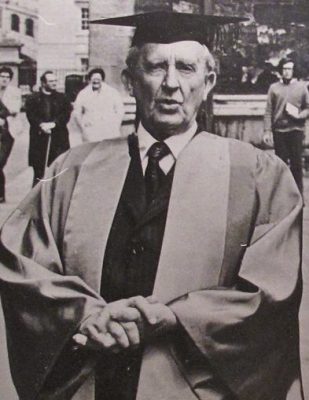 J.R.R. Tolkien was a celebrated author and poet.  He was born on January 3, 1892 in Bloemfontein, South Africa.  His full name was John Ronald Reuel Tolkien.  His mother was Mabel and his papa was Arthur.  Daddy Arthur was a bank manager.  J.R.R. Tolkien had one brother.  Mable, little bro and Tolkien traveled to England when he was three.  They went to visit family and the patriarch died before he could join them.  The tragedy resulted in the family moving in with Mabel’s parents in Birmingham, England.

Mabel homeschooled her children and J.R.R. was notably bright.  He absorbed all types of literature and loved to draw at a young age.  His mother passed away in 1904.  J.R.R. was twelve.  He attended King Edward’s School and St. Philip’s School after her death.  During his teenage years he invented a language with his cousins called Nevbosh.  His interest in the art continued and he crafted another language on his own (Naffarin).  In 1911, Tolkien started his collegiate career at Exeter College, Oxford.  He focused his studies in classics, but changed his degree to literature and English language in 1913.  He graduated in 1915 with first-class honors.

World War I was raging on.  J.R.R. Tolkien enlisted in the British Army in the summer of 1915.  He trained for a year and was deployed in France a year later.  The battlefront was gruesome and many of his friends died.  Tolkien caught trench fever and was hospitalized.  His illness spiked in 1917 and 1918, but he recovered and performed various tasks for the army.  He was promoted to lieutenant in 1918 and was demobilized in 1920.

Tolkien translated Beowulf in the 1920’s.  He completed it in 1926 and it went unpublished.  His son released it decades later.  In 1925, J.R.R. became a professor at Oxford with a fellowship at Pembroke College.  He wrote The Hobbit and the first two books of The Lord of the Rings at Pembroke.  World War II arrived and he served as a code-breaker.  The war concluded and he taught English and Literature at Oxford (1945).  He finished The Lord of the Rings in 1948.

J.R.R. gained fame and acknowledgement after his retirement in 1959.  Book sales were booming and profits were pouring in.  His close buddy C.S. Lewis nominated him for the Nobel Prize in Literature (1961).  Tolkien’s wife Edith Mary Bratt passed away in 1971. She was 82 years old. They married in 1916.  J.R.R. Tolkien died almost two years later from a chest infection (1973).  He was 81.  The couple had four children.

William Morris (1843 – 1896) was one of Tolkien’s biggest inspirations.  He was enthralled by his poetic prose.  Some of The Lord of the Rings locations were derived from Morris’s diction.  The Marvellous Land of Snergs (1927) by E. A. Wyke-Smith influenced much of The Hobbit.  S.R. Crockett wrote a historical book (The Black Douglas 1899) that contained a style that can be found in both The Hobbit and The Lord of the Rings.

The Hobbit began to take shape in the beginning of 1930.  Tolkien wrote “In a hole in the ground there lived a hobbit” and the story spawned from there.  He finished near the end of 1932.  The text was distrusted to his friends that included C.S. Lewis and a student, Elaine Griffiths.  Griffiths passed the manuscript on to an employee of George Allen & Unwin.  Her name was Susan Dagnall and she was captivated by the story.  The words traveled to Stanley Unwin and down to his son.  The young boy enjoyed it too.  Unwin was convinced and decided to green-light it.

The book was released in 1937.  All of the initial 1,500 copies sold out by the end of the year.  It was released in America in 1938 and translated into north of sixty languages.  Other editions dropped in 1951, 1966, 1978 and 1995.  The plot follows the hobbit Bilbo Baggins and his journey with a group of dwarfs and the wizard Gandalf.  Their goal is to claim the treasure guarded by a dragon named Smaug who lives deep in the Lonely Mountain.  The adventure has been adapted to television and film several times.

The high fantasy of The Lord of the Rings has received several adaptations too.  The most famous was directed by Peter Jackson in the beginning of the 2000’s.  The series was the result of a requested sequel for The Hobbit.  It took more than ten years for J.R.R. Tolkien to gather the premise.  C.S. Lewis provided constant encouragement.  The initial vision was to target a younger audience, but as the story evolved, the themes grew darker.  The end product was his magnum opus and it was broken into three parts (The Fellowship of the Ring, The Two Towers and The Return of the King).

The Fellowship of the Ring is set in Middle-earth and covers the story of another hobbit.  His name is Frodo Baggins and he comes into possession of the One Ring.  The Dark Lord Sauron wants that sweet, sweet ring in order to enslave the world and cover it in darkness.  A fellowship is formed and they set off to Mount Doom in order to destroy the ring.  The Two Towers continues the coverage of Frodo’s quest.  He meets Gollum, the previous owner of the ring and the hijinks continue.  Gollum has dissociative identity disorder and deepens the plot.  Battles are commonplace.  There are tears of sadness and joy and the fellowship moves closer to their goal.  The Return of the King brings the epic to an end.  The ring is destroyed and tragically Gollum is too.  All was not lost; millions of readers have found happiness in the series’s pages.

“It is no bad thing to celebrate a simple life.”