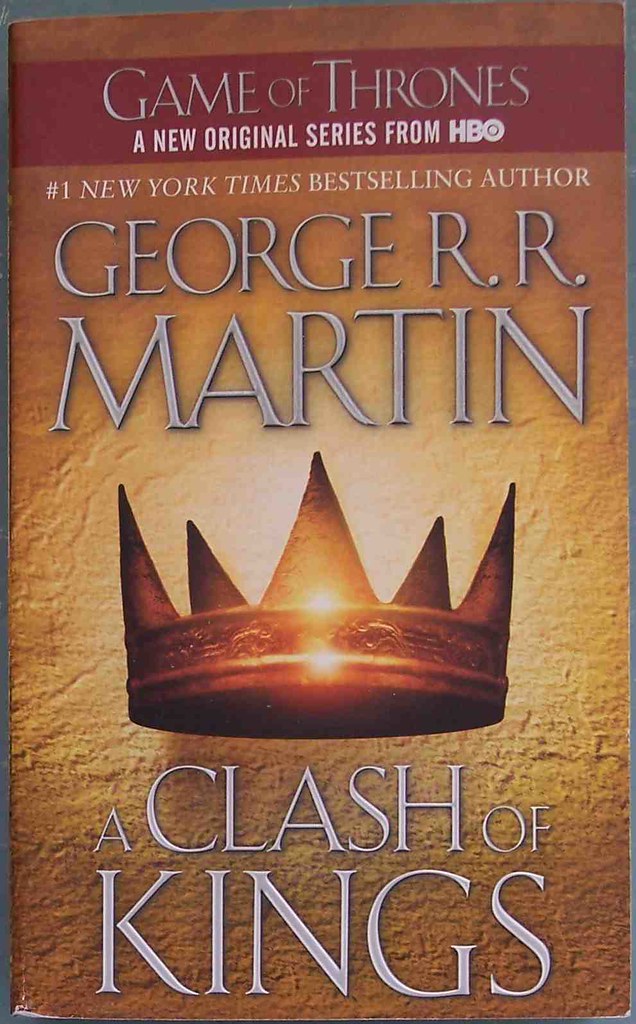 A Clash of Kings was written by George R. R. Martin.  It is the sequel to A Game of Thrones and the second novel in the A Song of Ice and Fire fantasy series.  The story was published in the United Kingdom in 1998 and the United States in 1999.  It received the Locus Award for Best Novel in the same year.  The plot of the book was adapted by HBO for the second season of the Game of Thrones television series.

Cressen observes a red comet.  He is the maester of Dragonstone and talks to a retired smuggler and knight named Davos.  Big D says that the lords will not pledge loyalty to Stannis Baratheon.  Several have sided with their king’s younger brother Renly.  Big C begs Stannis to join forces with Robb Stark or his brother.  The King refuses.  Queen Selyse Baratheon proposes they kill Renly.  Cressen decides that the priestess Melisandre (Red Woman) is the issue and prepares to poison her.  He slips a toxin into her drink at dinner.  She takes a sip and forces Cressen to do the same.  The maester dies.  The priestess does not.

Arya Stark heads north with the new recruits of the Night’s Watch.  Yoren tells her to pretend she is an orphan boy named Arry and promises to take her to Winterfell.  She obliges and gets in a fight with two lads named Hot Pie and Lommy after they steal her sword.  Arya wins.  The anger settles and she dreams of home.  Sansa Stark saves a drunk knight named Ser Dontos from King Joffrey.  She convinces her man to make Dontos his fool.  Tyrion talks to her.  He is gentle.  She still cannot trust a Lannister.  Tyrion talks to his sister Cersei and settles in as the impermanent Hand of the King.  Lord Varys reveals to Tyrion that he knows he is hiding his lover and former prostitute, Shae.  The two become allies.

Bran Stark dreams of direwolves.  He is the current lord of Winterfell.  Robb and his mother are away at battle.  Two of the Frey cousins are living within the castle walls.  Arya talks to three chained prisoners when they stop at an Inn.  Two of them are rude.  Jaqen H’ghar is cordial.  The Gold Cloaks arrive from King’s Landing in search of a boy.  Arya talks to the Bull.  His real name is Gendry.  She thinks the Cloaks are after her.  She is wrong.  They want Big G.  Everyone manages to flee.

Jon Snow and Samwell Tarly prepare to find their comrade Benjen Stark who is missing behind the wall.  The vanished is Jon’s uncle.  Catelyn Stark is concerned for her son Robb.  He is fifteen (eighteen in the television series) and now King.  Heavy is the head that wears the crown.  Robb sends a captured cousin of the Lannisters to King’s Landing with peace terms and Theon Greyjoy home to the Iron Islands to form an alliance with his father.  Catelyn departs to see her father, Hoster Tully.

Tyrion sends the commander of the Gold Cloaks Janos Slynt to the Night’s Watch for his role in slaying the dead King’s illegitimate children.  Varys and the dwarf scheme against Joffrey.  Their relationship strengthens.  Arya and the men find a village burned to the ground and a dismembered girl.  They try to save her.  It fails.  Yoren says the sea would have been safer than the route they are on.  Davos watches his allies burn the icons of the old gods.  Stannis sends letters to the lords of Westeros declaring himself as the heir to the iron throne.  Theon goes home and talks to his father.  He rejects Robb’s offer and tells his son he has plans of his own.

Daenerys Targaryen wanders the desert with her dragons.  Her people are starving and they find safety at the great city of Qarth.  Jon Snow and the Night’s Watch progress through the harsh unknown.  They discover several vacant wilding villages.  The Lannisters attack Yoren and the recruits.  Arya frees Jaqen and leads Hot Pie, Lommy and Gendry through a trapdoor to safety.  The others fight.  Cersei is furious with the arrival of Stannis’s letter.  Littlefinger says they should spread counter rumors.  Tyrion meets with Varys in secret.  The eunuch suggest that Baelish is up to something.  Bran is busy with the ongoings of Winterfell.

Tyrion steals a potion from Pycelle and meets with Littlefinger.  The two talk and Petyr leaves to betroth Myrcella Lannister to Lysa Arryn’s son in exchange for power.  Sansa goes to the godswood at night.  Dontos promises to save her and vows to be a true knight.  Gendry discovers Arya’s true identity.  He is captured.  Everyone tries to save him.  They fail.  Tyrion inspects a cache of wildfire and orders the royal pyromancers to make more.  Cersei is furious at Tyrion for his intention to send her daughter to Dorne.  Bran has more psychedelic dreams.

Catelyn meets with Renly Baratheon and he shows her his large army.  She says wow Renly that is a large army.  He suggests that Robb should join him.  She says maybe Renly, maybe.  A Clash of Kings.  Jon and the Night’s Watch rest at Craster’s Keep.  Craster is a degenerate wilding that offers his sons to the undead.  Theon is sent to raid a small costal village by his father.  Tyrion adds a potion to his sister’s drink and sends Eddard Stark’s bones to Robb as a sign of peace.  He announces that Myrcella is to marry Doran Martell’s youngest son.  Littlefinger is furious that his deal was a ruse.  Tyrion imprisons Pycelle for poisoning Jon Arryn.  Cersei awakes.

The Evolution of Arya

Arya witnesses Gregor Clegane and the Lannisters torture and kill several prisoners.  She starts to memorize the names of her enemies and repeats them every night.  Daenerys stays at the house of Xaro Xhoan Daxos in Qarth.  She announces her ambition to retake the throne.  Jojen and Meera talk to Bran.  Jojen asserts that he has greensight or the ability to see the future.  He tells Bran that he has powers too.  Tyrion blackmails Lancel and has him spy on Cersei.  Jaqen H’ghar tells Arya he will take three lives as repayment for saving him and two others.  The symmetry will restore the order.  She gives him a name.  That person dies sometime later.  Joffrey has Sansa beaten.  Tyrion consoles her.

Daenerys tries to gain support from the high civic council of Qarth.  They refuse.  Tyrion sends off Myrcella.  The people revolt in King’s Landing.  The Hound helps pacify the crowd.  Davos sneaks Melisandre into a cave under Storm’s End. She gives birth to a shadow.  He is horrified.  The Night’s Watch learn of the growing power of Mance Rayder.  Tyrion visits Shae and learns that Stannis controls Storm’s End.  Brienne and Catelyn march on.

Theon overtakes Winterfell.  Bran yields.  Reek pledges fealty to Theon in exchange for his freedom.  Osha offers herself to Theon.  He accepts both of their proposals.  Arya give Jaqen the final name.  It is Jaqen H’ghar.  Big J says he will help free them if she takes it back.  She nods.  They are freed.  She unsays the name.  H’ghar changes his face and hands her an odd coin.  She will be able to locate him if she gives it to anyone from Braavos and utters the words valar morghulis (all men must die).  The face changer disappears.  Daenerys tussles with the warlock Pyat Pree in the House of the Undying Ones.  She is victorious.

Tyrion prepares for war and learns that the wildfire is ready for a clash of kings.  Bran and company escape from Theon.  Jon and another ranger kill some wildings.  Ygritte is the sole survivor.  Jon lets her go.  Sansa reaches the age of womanhood and tries to hide it from Cersei.  She fails.  The Queen tells her that love is poison.  Tyrion tells Cersei that Joffrey needs to be seen on the battlefront to raise morale.  She says no.  Catelyn meets Jaime Lannister.  A lot is said.  Everyone is livid.  Theon has nightmares after killing some innocent boys to serve as effigies of Bran and Rickon.

Davos and Stannis begin to win the battle of the sea at King’s Landing.  A ship of wildfire explodes and they are defeated.  The rest of the troops storm the beach.  Tyrion and his men do their best to defend.  A member of the Kingsguard moves to betray him.  He is saved.  The situation worsens and Stannis’s victory is assured.  Mace Tyrell and Tywin Lannister appear from the rear.  Stannis is crushed.

Daenerys hires three ships after avoiding an assassination.  She names them after her dragons.  Arya, Hot Pie and Gendry run away from Harrenhal and Roose Bolton.  Joffrey decides to marry Margaery Tyrell.  Sansa is kept as a member of the court.  Littlefinger is promoted to Lord Paramount for uniting the Tyrells and Lannisters.  Ramsay enters Winterfell disguised as Reek.  He ignores Theon and destroys it.  Podrick stays by Tyrion’s side while he recovers.  Jon and Qhorin are captured by the wildings.  Qhorin lets Jon kill him to gain the wilding’s trust.  Snow is accepted into their circle.  Bran has more visions.  A Clash of Kings ends.

0 comments on “A Clash of Kings”