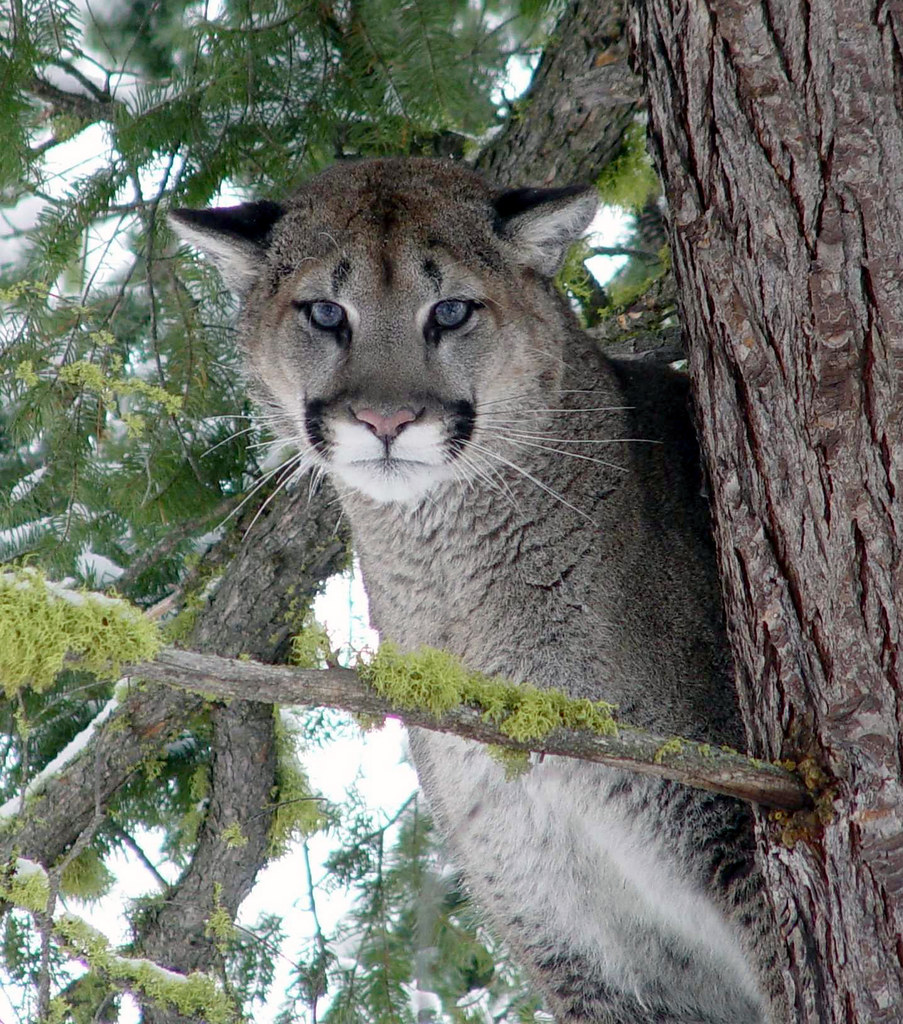 The cougar is the second largest cat in the Americas.  The jaguar is the first.  Their domain ranges from the Canadian Yukon Territory to the southern Andes of Chile.  The occupied land stretches over a total of one hundred ten degrees of latitude.  They live in the lowlands and deserts and all types of forests and tall mountains that stretch nineteen thousand feet into the clouds.

The gigantic swath of habitat has earned the cougar several nicknames.  There are over forty cougar pseudonyms in the English language alone.  The variety has placed the cat in The Guinness Book of Records for the animal with the greatest number of names.  The most popular are panther, puma, mountain lion and catamount (cat of the mountains).

The word cougar stems from the Portuguese term çuçuarana and Brazilian suçuarana.  The seventeenth century naturalists coined Cuguacu ara, which was shortened to cuguar by Georges-Louis Leclerc and Comte de Buffon in 1774.  Time passed and the modified English cougar was born.  Meow.

Cougars have sharp ears and round heads.  A powerful jaw, neck and forequarters help grasp and subdue their prey.  Five retractable claws are set in their forepaws and four in their hind paws.  One of the five on the forepaw is a dewclaw that does not reach the ground.  Their large teeth have evolved for hunting.

Adults have a shoulder height between two to three feet from the ground.  Most males are about eight feet long from nose to tail.  Females extend six feet nine inches on average.  The overall range for the species is between five and nine feet.  The weights are variable.  The fellas are among one hundred fifty to two hundred twenty pounds (one hundred fifty lbs. average).  The ladies are lighter and average one hundred twenty-one pounds (sixty-four to one hundred forty-one lbs. range).  The largest on record was two hundred thirty pounds.  Claims of cougar sightings over two hundred seventy pounds are sporadic, but unsubstantiated.

Some cougars are bigger than jaguars.  Some are not.  The jaguar is more powerful.  The cougar coat is plain in color and has many variations.  Most are tawny, sliver, gray or red hued.  Infants are born with spots and blue eyes.  The cubs have rings on their tails.  Juveniles are light colored with residual spots.  A leucism shaded cougar was captured in Brazil in 2013 on a camera trap.  It is the sole example of a pure white cat.

What do Cougars eat?

Cougars are hypercarnivores and have a diet that is over seventy percent meat.  Their favorites include mountain goats, bighorn sheep, elk, moose and deer.  Smaller game is consumed when convenient and sometimes they feed on human pets.  A North American study concluded that deer made up sixty eight percent of the native species diet.  Florida cats were outliers and preferred to dine on armadillos and wild hogs.

South and Central American cougars enjoy capybara and other large rodents over deer.  Ungulates account for thirty five percent of their diet.  Direct competition with local jaguars is the suggested cause.  Southern species will eat small reptiles and birds.  The event is uncommon in North America.  All species consume porcupines, beavers, rabbits, raccoons and mice on occasion.  Magellanic penguins are on the menu in Argentina.

The big cats are ambush predators.  They stalk and mock their victim from the shadows.  The distance shortens and they leap onto the back of their prey.  The powerful lunge is followed with an authoritative neck bite.  The meal succumbs to the pressure and dies.  The animal is transported to a hiding spot, covered with brush and fed on over a period of time.  Cougars dine on one large animal every two weeks.  Females kill every week to three days when raising their cubs.

Momma cougars reach maturity by their third year.  Their gestation period is about three months.  Adults mate with multiple partners and sometimes the litter has more than one father.  One to six cubs are born.  One kitten will survive.  The mother does all of the parenting.  The babies are blind and begin to hunt at three months old.  They hunt alone at six months.  Juveniles leave at the age of two.  Life expectancy in the wild is eight to thirteen years.  They can live up to twenty in captivity.

Cougars thrive in isolation.  Mothers and her young are the exception.  Some species will share food and have a dominant male that controls the territory.  Males do not overlap their hunting grounds with other males.  They are fierce…fierce, but respectful.  Their home range covers up to four hundred square miles.  Female ranges are half the size of the males.  Communication is separated between aggressive growls and persuasive mating yowls.  Offspring whistle, mew and chirp with their mother.  Everyone purrs.