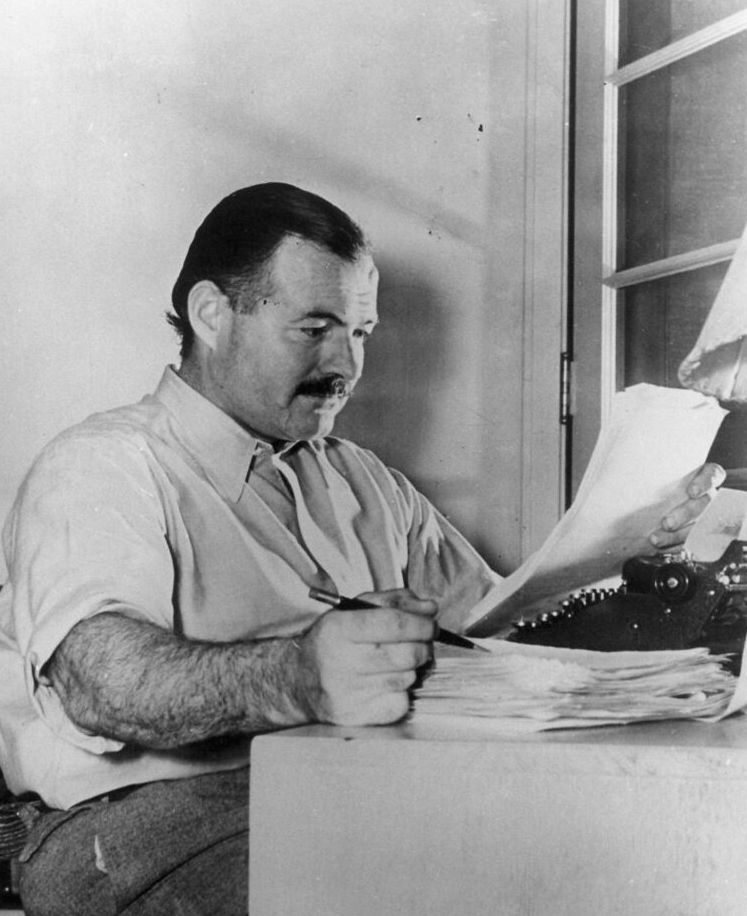 Ernest Hemingway was an American journalist, novelist and outdoor enthusiast.  He was born on July 21, 1899 in Oak Park, Illinois.  His middle name was Miller.  Mother Hemingway was Grace and a musician.  Papa H was Clarence and a physician.  They had six children.  Ernest was the second oldest.  Grace taught him the cello against his will.  The music lessons enhanced his writing later in life.

Clarence introduced Hemingway to the wilderness during their family summer vacations in Michigan.  Ernest learned how to hunt, fish and camp with his father.  The experiences created a enduring love for the wilderness and isolated areas.  He attended Oak Park and River Forest High School and was a talented athlete and member of the orchestra.  Hemingway graduated in 1917 and worked as a journalist for The Kansas City Star.

Poor eyesight prevented him from joining the Army in 1917.  He enlisted with the Red Cross as an ambulance driver instead.  Ernest arrived at the Italian Front of World War I sometime in May 1918.  He was injured by mortar fire on July 8th.  He received the Italian Silver Medal of Military Valor for his heroics during the fallout.  Both of his legs were lacerated by shrapnel.  The author was eighteen.

Six months passed at the Red Cross hospital in Milan.  Hemingway was healed.  He returned to the United States in January 1919.  The Toronto Star Weekly hired him as a freelance writer.  Ernest moved to Chicago in 1920 and continued to write for the paper.  He met an acquaintance of his roommate named Hadley Richardson.  They married a year later and moved to Paris.

Ernest Hemingway continued to write for the Toronto Star as a foreign correspondent.  He met art collector Gertrude Stein and the writers Ezra Pound and James Joyce.  Stein introduced him to the Parisian art scene and lost generation.   He met Spanish painters Pablo Picasso, Juan Gris and Joan Miró.  F. Scott Fitzgerald and Ernest formed a friendship.  Their relationship was complicated and founded on mutual respect.

In 1923, the family returned to Toronto and had their first child.  Everyone moved back to Paris in 1924.  They visited Spain and Ernest was enraptured by bullfighting.  He finished the rough draft of a novel that centered around the fights in 1925.  The Sun Also Rises was published in 1926.  A year passed and his marriage ended.  He wedded Pauline Pfeiffer in the Spring of 1927.

A Farewell to Arms

Pauline gave birth to their son in 1928.  They moved to Key West, Florida.  Hemingway worked on A Farewell to Arms.  The ending was rewritten numerous times.  It was perfected and published by Scribner in 1929.  The reviews were positive.  The book cemented Ernest as a serious American author.  His fame grew.  So did his beard.  He wrote a nonfiction synopsis about bullfighting.  Death in the Afternoon released in 1932.

Hemingway injured his arm in a car accident.  The pain sidelined the writer for a year.  Pauline tended to his injuries.  They went on a ten-week safari throughout Kenya in 1933.  The experience provided intimate material for Green Hills of Africa.  The nonfiction account of their adventure was published in 1935.  He sailed the Caribbean for the next few years and transitioned back to fiction.  To Have and Have Not was completed in 1937.  It followed a fishing boat captain from Florida.

Time passed and his marriage soured.  They separated and Ernest sailed to Havana, Cuba.  A second divorce was finalized in 1940.  He married the writer Martha Gellhorn in Wyoming soon after.  Ernest moved to Ketchum, Idaho.  He spent the winters in Cuba and worked on For Whom the Bell Tolls.  His third wife was the inspiration.  It was published in July 1940.  The story sold over five hundred thousand copies in a few months.  His popularity soared.

His marriage fell apart.  Another divorce and another woman.  His fourth and final was a journalist named Mary Welsh.  They met during his coverage of Europe during World War II.  Hemingway received a Bronze Star for his content.  He was damaged in another car accident and slipped into depression.  He was still prolific.  Across the River and into the Trees was printed in 1950.  The novel was eviscerated by the critics.  He was furious.

The first draft of The Old Man and the Sea (1952) was written in eight weeks as a rebuttal.  The terse magnum opus won a Pulitzer and garnered Hemingway international fame.  Two years passed and he was injured in a pair of successive plane crashes.  He received the Nobel Prize in Literature the same year.  His drinking increased.  His health deteriorated over the years.  He continued to write.  He ended his own life before his work was published.  Ernest Hemingway passed away on July 2, 1961.  He was sixty-one years old. His writing endures.

“There is nothing to writing. All you do is sit down at a typewriter and bleed.”