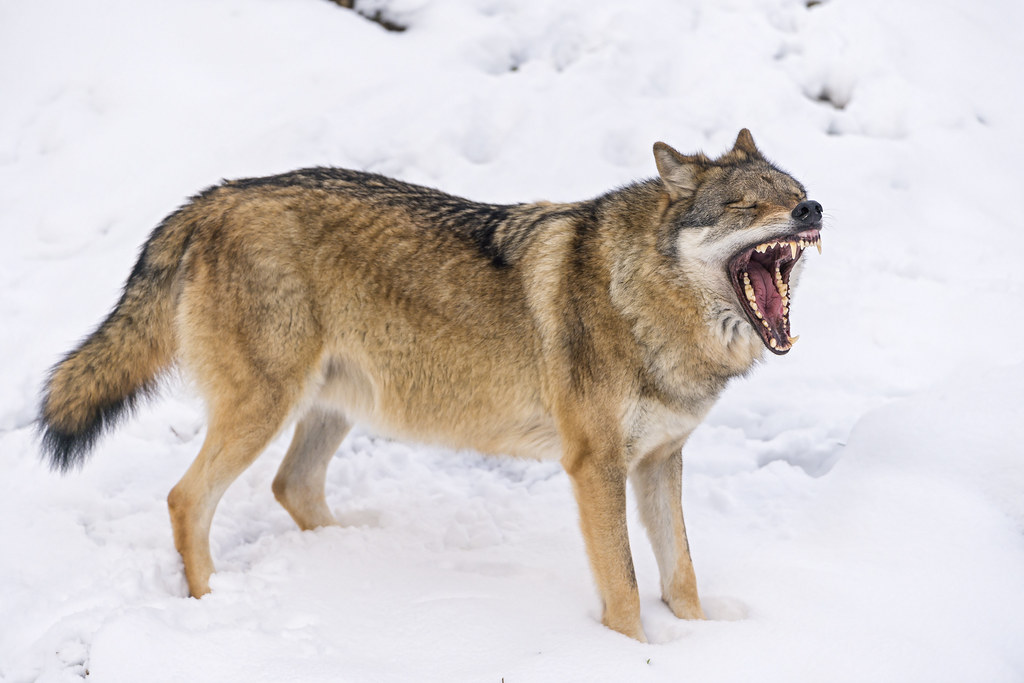 The wolf is a carnivore and indigenous to North America and Eurasia.  They are the biggest extant members of the Canidae family and known as the grey or gray wolf.  The modern word wolf is derived from the Old English wulf that was taken from the Proto-Germanic term wulfaz.  The Latin word is lupus.  Remus Lupin from Harry Potter was named after the Latin phrase.  He was a werewolf.

Coyotes and jackals have longer ears and shorter tails than wolves who have a wider nose and smaller torso.  The wolf  is a powerhouse with a muscled neck and lowered rib cage.  Their legs are longer than most canids.  The feature allows them to navigate snow with grace and agility.  Their triangular ears sit on a heavy head and wide forehead.  The muzzle is stunted and supported by strong jaws.  Dense teeth are suited for crushing bone.  Flat molars provide a stable chewing surface.

Adult wolves measure between three and a half to five and a half feet long.  Their shoulders are a little under three feet from the ground.  A foot and a half tail swings behind.   The size and mass of the animal increases the further they are from the equator (Bergmann’s Rule).  The average weight is ninety pounds.  The smallest species is twenty-six pounds.  The largest is over one hundred seventy-five.  European variants are heavier than their North American counterparts.  Females run about ten pounds less than the males.

Guard hairs determine a wolf’s fur color.  Gray, black, white and brown are the most common shades.  Eurasian wolves are tinted with yellows, oranges, reds and browns.  Some are light gray.  The Rocky Mountains, British Columbia and Alberta host black, blue and silver colors.  Black is the most common pigment.  North American species are redder.  Scientists expect that dogs have passed the color white into the wolf gene pool.

Wolves roam throughout Europe, Asia and North America.  Predation and human intervention have reduced their historic range by thirty three percent.  Several species have gone extinct throughout Western Europe, Japan, Mexico, Ireland, the United Kingdom and the United States.  Modern species are bound to the wilderness and remote areas.  They are found at sea level up to nine thousand eight hundred feet in various habitats that include forests, grasslands, the tundra, deserts and mountain ranges.  The abundance of available prey is more important to their survival than topography.

Herbivorous hoofed mammals are the preferred prey.  Vulnerable individuals are targets.  Wolves hunt in packs.  A group of fifteen can take down an adult moose.  Roe deer, wild boar and red deer are the favorites in Eurasia.  North American species eat moose, elk, mule and white-tailed deer.  Digestion completes within hours and extra fat is stored underneath the skin and around the heart and other organs.  The reserves help the animal survive the winter.  A wolf will eat several times every day.

What do wolves eat?

They are not picky eaters and will supplement themselves with rodents, reptiles, large insects and eggs.  Some will eat fish from freshwater streams.  Various fruits and berries and grasses are consumed to provide additional nutrition.  Carrion is eaten when all else is scarce.  Brown and black bears are their main foes.  The bears and wolves will trade blows and kill each other’s young.  Tussles occur between hyenas and coyotes too.

Wolves are social creatures that roam as packs and alone.  Lone wolves will mate and create their own nuclear family.  Eight members make up the household and sometimes they blend together.  The largest pack recorded in the wild contained forty-two associates.  Offspring leave home to form their own alliances after one to four years.  Stragglers are never invited.  Assimilation can occur if the wolf is disabled or young and poses no threat to the hierarchy.

Maturity is obtained after two years.  Wolves mate a year later.  They remain monogamous throughout their lifespan.  If their partner dies, another is found in quick succession.  Females produce pups every year.  Dens are crafted during the summer.  They are formed within natural formations and shelters.  A burrow is dug if the landscape does not provide.  Gestations lasts around two months.  Young females give birth to five young per litter.  Older wolves have six to fourteen.  Mortality rate is between sixty and eighty percent.

Newborns resemble German Shepherd puppies.  They are born deaf and blind.  They begin to see by their twelfth day.  The young leave the den after three weeks.  They eat solid food after a month.  Their weight increases thirty times after four months.  They join the adults on hunts soon after.  The same trails and routes are used to stalk food.  The adults eat first.  The young respect their elders, smile…chagrin.