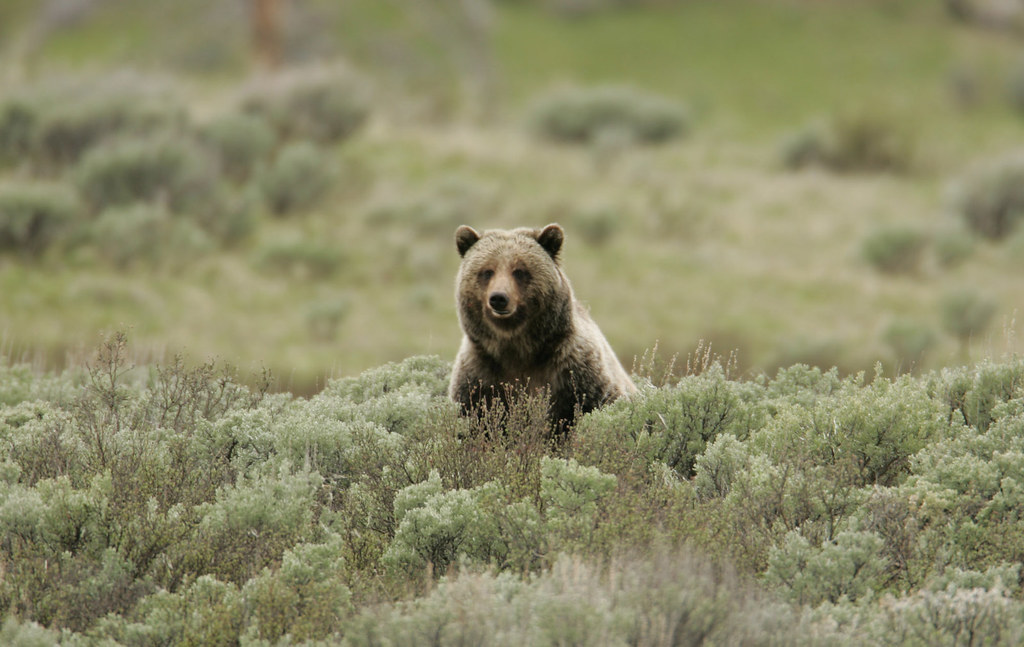 The American explorers William Clark and Meriwether Lewis were the first to document the bear.  Their initial description was grisley and was defined with two words.  Grisly or gruesome and grizzly or grizzled.  Grizzly was the one that stuck.  The zoologist George Ord classified the bear as U. horribilis (horror) in 1815 and went with the gruesome explanation.

Around fifty-five thousand wild grizzly bears roam the lands of North America.  Thirty thousand of them are located in Alaska.  Fifteen hundred prowl the lower forty-eight states.  One hundred wild bears are found in Idaho,  six hundred are in Wyoming and almost eight hundred live in Montana.  There was one in Hawaii that surfed for his prey, but he is retired and among the thirty thousand in Alaska.

Male grizzlies weigh between four hundred and seven hundred ninety pounds.  The largest recorded was one thousand five hundred.  Females are smaller and have an average range between two hundred ninety and four hundred pounds.  Inland females can stop growing at two hundred twenty pounds.  Coastal grizzly ladies can reach up to five hundred pounds due to their protein rich habitat.  The bear’s shoulders stand over three feet from the ground.  They are six and a half feet long.  A pronounced eleven-inch hindfoot lags behind.

The color of their fur is brown with darker shades on their legs.  The fur on their back is tipped with yellow and white.  Sometimes grizzlies are found with black or blonde hair.  Adults have a muscular hump on their shoulders.  Black bears do not.  Their front claws are between two to four inches and adapted for digging.  They have a behind that is lower than their shoulders.  A black bear’s stands higher and their claws are half the size.

Grizzly bears are classified in the Carnivora order, but they eat like an omnivore and enjoy both animals and plants.  Their favorite meat comes from mule and white-tailed deer, bison, bighorn sheep, caribou, elk, moose and at times, black bears.  When they hunt bears, they focus on the injured or the young.  Adult black bears are too formidable.  Trout, bass, salmon and other fish are on the menu for coastal grizzlies.  The smaller inland bears feed off of grasses, rodents, nuts and worms.  Alaskan bears will feast on clams and berries.

The bears are capable of catching leaping salmon directly in their mouth.  They have the speed and dexterity to chase fish in the water and pin them with their claws.  Bison and moose hunting requires patience and careful calculation.  A bear will stalk the weakest ones and corner them after covering a long distance.  Scientists estimate that grizzly bears are responsible for killing fifty percent of moose and elk calves that are born each year in Yellowstone and Alaska.  Coastal bears will forage through dead or beached whales.  They will consume landlocked sea lion and seal carcasses.  Delicious.

Seasons affect the bear’s diet.  They will eat in groups when food is abundant.  Everyone splits apart when it is scarce and they fend for themselves.  Even with their hunting prowess,  plants make up the majority of their diet.  It sometimes fills between eighty to ninety percent of it.  Berries and legumes are their favorite.

The apex predator mostly engages in one sided battle and will steal other predators kills.  They can run up to thirty miles per hour and climb trees.  Yellowstone grizzly bears will antagonize gray wolves and other big cats.  Most cougars will concede their profit.  Capable and agile ones may fight to the death.  Black bears avoid grizzlies, but the opposite is not true.  A grizzly will invade their territory to secure food.  Confrontations are rare and the populations have split from competitive exclusion.

Grizzlies are solitary animals, except when they congregate near salmon spawns and when females care for their young.  A female bear can produce between one to four cubs.  They average two and are very protective of them.  The bears have one of the lowest reproductive rates.  Sexual maturity is not reached until they turn five.  After mating, they will delay their embryo implantation until hibernation.  If they do not receive enough nutrients before they rest, a miscarriage will occur.  The mothers stay with their cubs for two years and do not mate while they raise them.  When the process completes, they may stay celibate for another three years before the cycle starts again.  The plot thickens because male bears live in large territories that make female scents hard to track.

Most bears die before their first birthday.  Females have an average lifespan of twenty-six years.  Male grizzly bears average twenty-two.  Their lives are fraught with danger and seasonal breeding showdowns.  The oldest recorded coastal bear was thirty-nine years old.  The oldest inland grizzly was documented at thirty-four years and found in Alaska.  Captive grizzlies can reach up to forty-four years.