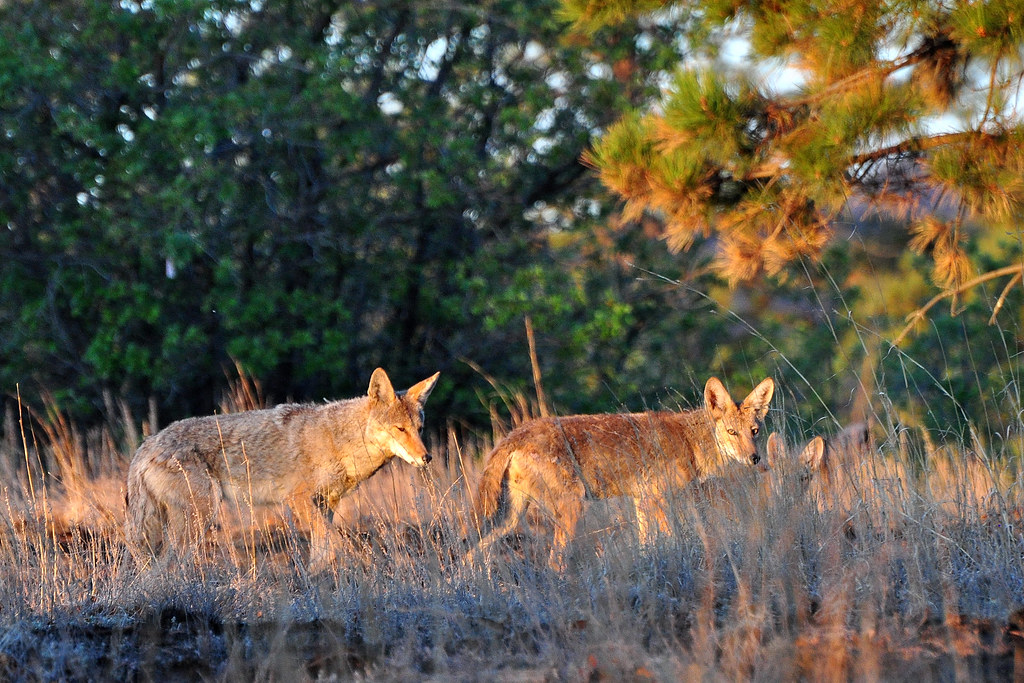 Coyotes are a canine species indigenous to North America. They belong to the Canis genus that includes wolves, golden jackals and dogs.  A coyote is sized between the jackal and wolf.  The wolf is bigger.  The jackal is not.  The arithmetic is flawless.  Coyotes are experts in mathematics.  Nineteen subspecies are recognized today.

The first written reference of the coyote was logged by Francisco Hernández de Toledo in Plantas y Animales de la Nueva España (1651).  Big Francisco was the court physician to the King of Spain, a naturalist and disco enthusiast.  The animal was described as a Spanish fox.  The first published instance was in 1780 under the Nahuatl name coyōtl.  The original English appearance came later in 1824 as cayjotte and cocyotie.  The name evolved into coyote by the 1880’s.  The decided Binomial name Canis latrans translates to barking dog.

The average male coyote weighs between eighteen and forty-five pounds.  The ladies are about five pounds lighter.  Northern subspecies are twice as heavy as their southern relatives.  Coyotes are three feet to four feet five inches long.  This includes a sixteen-inch tail.  The largest on record was measured at four feet and eleven inches in 1937.

What color is a coyote’s fur?

Red and light gray are the dominant fur colors.  Shades of black and white are blended throughout.  Albinism is unusual.  One out of four hundred thousand is albino.  Coyotes in the desert have lighter coats than ones found at higher elevations.  Short and soft underfur sits below long coarse guard hairs.  The fur length is more pronounced and denser in northern variants.  Wolves have larger frames and skulls.  Dogs have rounder tracks.

Coyotes are diverse eaters.  Meat makes up ninety percent of their diet.  Ten percent is not meat.  Favorites include mules, deer, moose, elk, rabbits, hares and sheep.  They will consume bison carcasses and eat a variety of birds.  Pigeons and doves are preferred.  Snakes, turtles, insects and fish are on the menu.  Black bear cubs and seals are eaten on occasion.  Larger prey up to four hundred pounds is eliminated in packs or pairs.

Under two pounds of food is required daily for survival.  Five hundred and fifty pounds are consumed annually.  Peaches, pears, apples, blueberries, blackberries, peanuts, cantaloupes carrots and watermelons are dined on when meat is unavailable.  Grasses, wheat and grain are swallowed throughout the winter and early spring.  Coastal coyotes (C. C.) have increased their focus on marine-based foods as the grizzly bear population has decreased.

Olfaction or the sense of smell is important for hunting.  Scientific studies have revealed that visual cues are more critical.  The adults work together to slay big targets.  The attack is carried out from the front.  Wolves approach from the rear.  Coyotes target their victim’s throat and head.  Smaller catches are pounced on.  Badgers are their buddies.  The two will form mutualistic hunting groups.  Some pairs grow close and rest with their counterpart.

Habitats shared with gray wolves causes fierce competition.  Cougars, bears, eagles and alligators are predators.  The threat is mild.  Coyotes are more than capable of determining the appropriate time to flee.  Foxes are treated with respect.  Bobcats and coyotes fight for prey.  The coyote is favored in head-to-head bobcombat.  The lynx/coyote match-up is abysmal.

Packs are the social unit.  They are formed around a reproductive female.  Nonfamily packs are ephemeral and created when chasing massive prey.  Up to seven males will fight for the right to mate with the female.  The tussle ends after one is selected.  Coyotes are monogamous.  Ladies that fail to reproduce will help raise other family member’s pups.  Gestation lasts two months.  Six babies are born in a den.  Eyes open after ten days.  Walking occurs after twenty.  Adolescents begin to run at six weeks.  They are playful and adorable.  Full growth is reached after nine months.  Everybody howls.