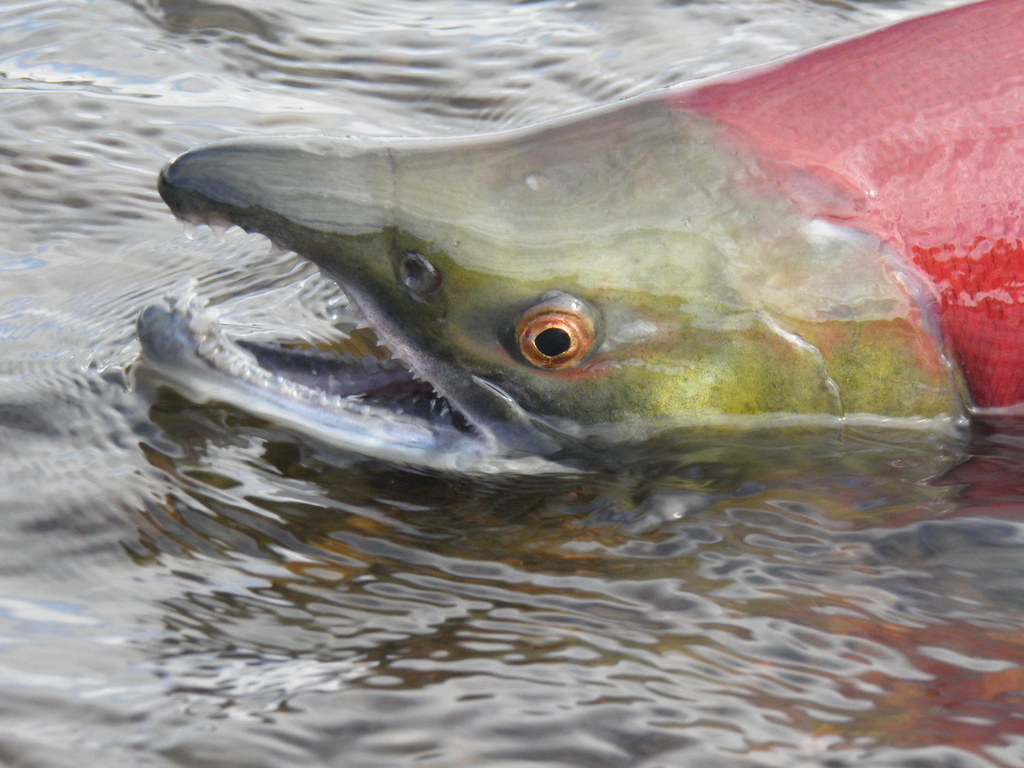 Sockeye Salmon are anadromous (migratory) Pacific Ocean fish.  Their other names include the blueback, red and kokanee salmon.  They are the third most populated salmon in the Pacific after the chum and pink salmon.  The sock boys (and girls) are members of the Oncorhynchus genus that incorporates trout.  The genus stems from the Greek words ὄγκος (barb) and ῥύγχος (snout).  The name sockeye originated from the Halkomelem phrase Suk-kegh that translates to red fish.

The blueback salmon nickname is due to their blue and silver hued color that forms when they swim the ocean.  Their bodies morph into brilliant reds when they proliferate spawning grounds.  The head turns green.  The pigment change is the cause of the red salmon pseudonym.   The fish reach an adult length between two and two feet nine inches.  They weigh up to fifteen pounds.  Serrated gill rakers and the absence of spots on their back and tail are the fish’s defining characteristics.

Some of the salmon are landlocked and spend their existence in lakes.  These sockeyes are called kokanee.  They are smaller than their ocean relatives and grow a little over a foot long.  They appear in bodies of water throughout British Columbia, Canada and the western United States.  Japanese kokanee salmon are called kunimasu.  They went extinct in 1940 from acidic water in their native Akita Prefecture.  The species was reintroduced through egg transplants.  They are now considered a subspecies (Oncorhynchus kawamurae).

Sockeye salmon feed in schools to avoid becoming prey.  They are capable of changing their position in the water column.  They eat the minimum amount for survival.  Some are aggressive when food is scarce.  Zooplankton are their main food source in fresh and salt water.  They dine on shrimp when it’s convenient.  Juveniles consume insects.

The salmon are semelparous and die after spawning once.  The young will spend one to two years in freshwater before heading to the ocean.  They swim in saltwater for up to three years before they return to the sweet, sweet lake.  The ladies will spawn three to five times over the course of a week.  Six to nine weeks later the fry or babies are released and the cycle repeats.  Males provide no parental care.

The male’s hump height, snout length and girth increase when they mature.  The females’ snout increases, but their bodies remain the same.  Hierarchies form during mating season.  Selection favors the biggest male and female fish.  The men seek the largest and reddest females who hold the most eggs.  The women mate the quickest with the largest suitors.  The smaller fish are left out.  Reproduction in the beginning of the mating season yields better results than the latecomers.

Energy depletion is the beginning of the breeding cycle.  Protein and fat stores are lost as the fish swim away from the ocean.  They stop eating when they enter freshwater.  The journey lasts several months.  Success is measured on the fish’s ability to ration energy.  Inefficient movement can lead to unsuccessful courtship and the inability to spawn.  The males have to decide on the length they pursue courtship against the total time they have in the spawning grounds.  Winning the delicate chess match is their sole purpose.

One hundred and seventy thousand metric tons of sockeye were harvested from registered fisheries in 2010.  This is the equivalent of sixty-five million fish.  One hundred fifteen thousand tons were produced in the United States.  The remaining were located in Russia and Canada.  The largest batch is found in Bristol Bay, Alaska.  Thirty million are caught annually.  Ninety percent of the Asian harvest occurs on the Kamchatka Peninsula in far eastern Russia.  Sockeye are rarely farmed.  The first instance of the practice occurred in Langley, British Columbia in 2013.

Sockeye Salmon in the United States are listed under the US Endangered Species Act by the National Marine Fisheries Service in the Snake River.  The Lake Ozette, Washington based lake was safeguarded after the Shoshone Bannock Tribe petitioned for their protection in 1991.  Fish in the Puget Sound and Columbia River are secured under the same decree.  The population as a whole is designated as a species of Least Concern by the IUCN (International Union for Conservation of Nature) Red List.

The Canadian conservation status of the population is under review by the Fisheries and Oceans Canada.  Monitoring is under way in the Fraser River sockeye run.  The number of fish has declined since the 1990s.  Ten percent of the expected turnout of over ten million was observed in 2009.  The cause is unknown.  Environmental changes and disease are the top two assumed factors in the Fraser River.  Temperature fluctuations in the water have caused discrepancies worldwide.  Sockeye salmon remain delicious to this day.