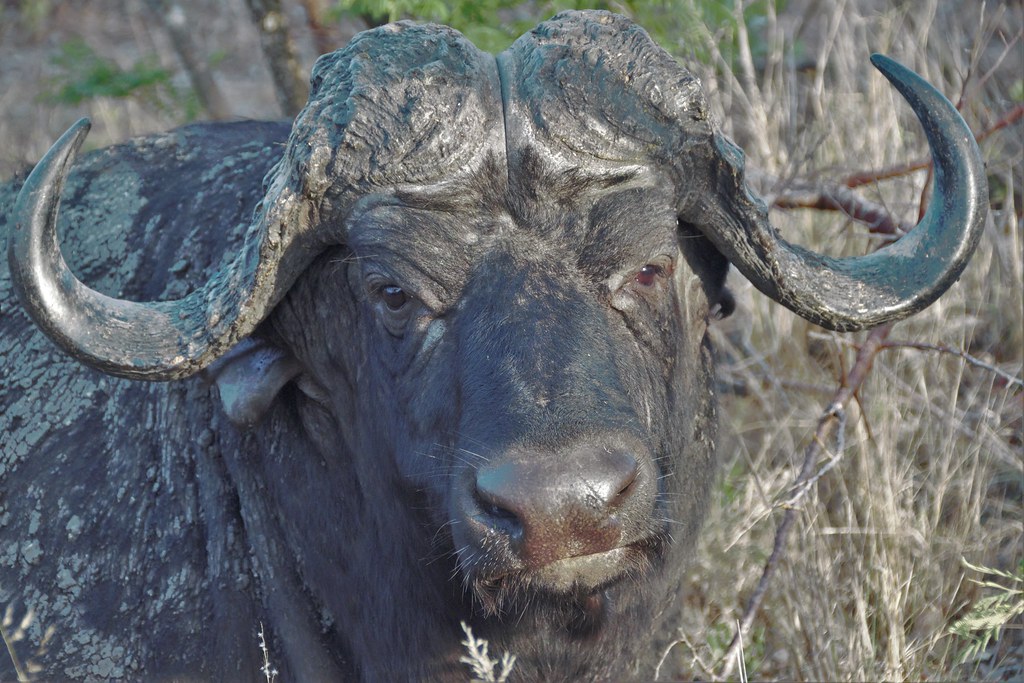 The African buffalo is also known as the Cape buffalo.  They populate the middle to lower parts of Africa.  They are between three to five and a half feet tall.  The buffalo’s body length ranges between six to eleven feet long.  Their tails are two to four feet.  African buffaloes have stout bodies and powerful short legs.

Forest buffaloes are brown and red in color.  Their horns curve up and to the back.  There are large tufts of hair around their ears.  The savannah buffaloes have darker brown and black fur.  White circles form around their eyes with age.  The females have red in their coats.  Their horns are over three feet apart.  They form a shield known as a boss at the base.  The horns are done growing by the age of six and the boss hardens before they turn nine.

African buffaloes reproduce in the rainy season.  Peak birth time is in the beginning of the season and mating takes place near the end.  Males are protective of their potential suitor and competition is fierce.  The dominant bull typically wins.  The ladies can give birth by the time they turn five.  The cows are pregnant for close to a year.  The calves hide out in the foliage until they are a couple of weeks old.  They join the herd by the time they are a month old and stick to the middle of the group for safety.  Mothers stay with their young until a new calf is born.  Their maternal bond is stronger than other bovids.

Herd sizes are quite disparate.  The core is built with females from the same family and their offspring.  The sisters are surrounded by a sub-herd of loyal males, high ranking females, males and older buffaloes.  The alpha bull (AB) is in charge and is avoided by everyone else.  He has the thickest horns in the herd.

In the dry season the males split from the herd and form groups of bachelors.  Alcohol is not encouraged.  There are two types that are comprised of bulls over twelve years old and bulls that are not.  Everyone rejoins in the rainy season and younger bachelors mate.  Grandpa bulls sometimes fail to assimilate back into the herd when they can no longer compete with the young guns.  Bull fighting and sparring is common.  There is no matador present.  A fight is initiated when one male lowers his horns to another.  The instigator waits for his opponent to do the same.  They lunge at each other and twitch their horns back and forth against each other.  The fights are mostly amicable and the participants console each other afterwards.  A violent fight is rare and ephemeral.  Females almost never spar.

Buffaloes are vocal animals.  They produce low pitched sounds that are similar to the calls of domestic cattle.  Intermittent noises signal that the herd needs to move.  Creaking sounds mean that the boys and girls need to change directions.  When water is the destination, they emit long maaaaaaaaa sounds for up to twenty minutes at a time.  The sound is not to be confused with the one they make when they walk over thorns and say “maaaaaa hooves!”.  There are unique grunts when they fight and high-pitched noises when they are distressed.  Honks, bellows and croaks can be heard when they are grazing.

Diseases are widespread amongst the African buffalo.  They are susceptible to foot and mouth disease, bovine tuberculosis and corridor disease (theileriosis).  The symptoms are mostly dormant if the animals are in good health.  Local health ordinances restrict the movements of buffalo that are afflicted.  Game wardens have managed to breed disease free buffalo that can be transported.  They are expensive and sought out by breeders and sell for over one hundred thousand dollars.

African buffaloes are expert grazers.  They stick to forests, floodplains, swamps and grasslands.  They prefer heavy ground cover and a nearby water source.  The live off of tall grasses and use their tongue and wide teeth to consume grass quickly.  Once the coarse grass is tarnished, they move to a fresh source.

Buffaloes have several predators that include humans.  They can defend themselves and lions have a hard time killing them.  The pride needs to work together to secure their prey.  Crocodiles stick to the elderly and young calves, but they can take an adult down by themselves.  The Nile crocodile is the only animal that can do so.  Hyenas, cheetahs and leopards are capable of hunting calves.

The global African buffalo population is around five hundred thousand.  Some species are more endangered than others.  The International Union for Conservation of Nature (IUCN) recently moved them to a near threatened (NT) species status.  They are a member of the big five game group that includes the leopard, lion, rhinoceros and elephant.  The designation is given to the hardest and most dangerous animals to hunt in Africa on foot.  The African buffalo is a valuable prize for big game hunters.  A hunter will pay over ten thousand dollars for the opportunity to track and hunt one.