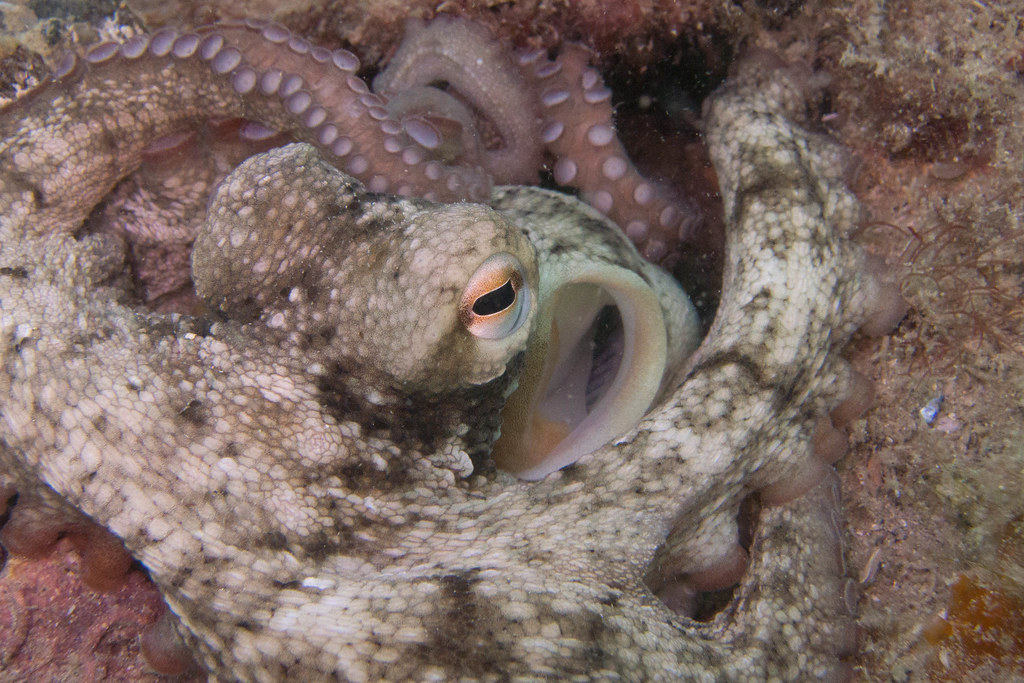 The Octopus has eight limbs and a soft body.  They are all venomous, but most are not dangerous to humans.  Octopuses live in the ocean and mature early.  Their name comes from the Ancient Greek word ὀκτώπους (oktōpoús).  Oktō means eight and poús translates to foot.  The term octopodes has been used throughout history.  The accurate modern plural is octopuses and not octopi.  Octopi is considered grammatically false.  Octopuses was used as early as the beginning of the 19th century.

The start of the octopus digestive system is the buccal mass.  The pharynx, salivary glands, radula and mouth are what it consists of.  Small teeth line the spiked radula that serves as the tongue.  It breaks down food and slides it into the octopus’s esophagus.  The gastrointestinal tract picks up the particles with its membranes.  A crop stores some of the food and the stomach takes the rest.  The nutritious sludge builds in the caecum where the food and liquid are separated and absorbed in the digestive gland.  The remaining waste is ejected into the ocean in typical animalistic fashion.

Most octopuses are predators and live throughout various levels of the ocean.  The bottom-dwellers survive on clams, whelks (mollusks), crustaceans and polychaeta worms (bristle worms).  The open swimmers snatch up fish, prawns and other cephalopods.  Clams, crabs and scallops fall victim to the giant Pacific octopus.  Moon snails are too large to eat and prey that is fixed on rock surfaces is inaccessible.

How do octopuses hunt?

The octopus hunts in several ways.  Some tip toe along the ocean floor and probe the cracked rocks with their tentacles.  They can propel themselves through the water and escort their victim into their mouth with their arms.  The suckers restrain the food.  Some prey cannot move at all.  Those are the real suckers.  Crustaceans receive a saliva injection that causes paralysis.  The immobilized target receives a big kiss that removes their shell.  Mollusks are inoculated with a nerve toxin through a hole that the octopus creates with their teeth.  The poison kills the prey instantly.  The big boy (and girl) octopuses can swallow their food whole.

The mouth and brain make up the head of the octopus.  The feet are flexible prehensile (able to grasp by wrapping around an object) appendages called arms.  The body is bilaterally symmetrical.  The arms are divided into four pairs.  The back two are used to creep along the ocean floor.  The other six are used to hunt.  The vital organs are stored on the back of the head in a visceral hump.  Gills are used to breath and the mouth is under the arms.  It has a razor-sharp beak.

The skin is littered with sensory and mucous cells.  The soft tissue allows the octopus to contort, contract and lengthen itself at will.  This allows them to slip through tiny cracks and openings.  The largest species can slide into small one-inch gaps.  The insides of the arms have round adhesive suckers that act as an anchor and are capable of object manipulation.  Each sucker muscle has two parts.  The central portion is hollow and called an acetabulum.  It sits inside the shallow outer infundibulum cavity.  They are covered in a protective chitinous cuticle.  All eight arms are responsive to light.  This allows the octopus full control of them without the use of vision.

An ink sac is under the digestive gland.  There is an ink producing gland attached to the sac.  The primary pigment is made up of melanin.  The gland works away and the sac stores the byproduct.  A water jet ejects the ink through a funnel shaped opening.  The ink mixes with mucus as it sprays into the open ocean.  This creates a thick, blobbed texture that serves as an escape route from predators.

The octopus’s circulatory system is closed and the blood stays within the blood vessels.  There are three hearts.  Two branchial ones circulate blood through both gills and a systemic heart serves the rest of the body.  The main heart is inactive when the animal is swimming.  Backwards swimming through jet propulsion is the fastest mode of transportation.  The lack of circulation causes them to tire out and is the reason they prefer to crawl.

The largest octopuses can live up to five years.  Most have shorter life expectancies of six months.  Their life is limited by reproduction.  Males thrive for a few months after mating and the females pass after their eggs hatch.  Pacific striped octopuses are the exception and reproduce multiple times over their two years of life.  Scientists believe that the short lifespan is an evolutionary trait to prevent rapid overpopulation of the predator.

Every ocean is home to the octopus.  None live in fresh water.  Some live near the shore and others crawl around coral reefs.  The spoon-armed octopus can be found at depths over three thousand feet.  The vent octopus (Vulcanoctopus hydrothermalis) lives around hydrothermal vents up to six hundred thousand sixty feet deep.  Several species exist in the abyssal and bathyal depths, but only the dumbo octopus lives in the hadal zone.  One was photographed at twenty-two thousand eight hundred twenty-five feet deep.

Octopuses are very smart. They excel in maze and problem-solving exercises.  It is unknown how the isolated creatures learn.  A young octopus ascertains nothing from their parents and no parental care is given beyond egg tending.  Lab octopuses can be taught to differentiate between shapes and patterns and will play with toys in their aquarium.  Some will escape their environment and explore nearby tanks in search of food.  Others will use shells and other objects for shelter and tools.  The octopus works hard and plays harder.