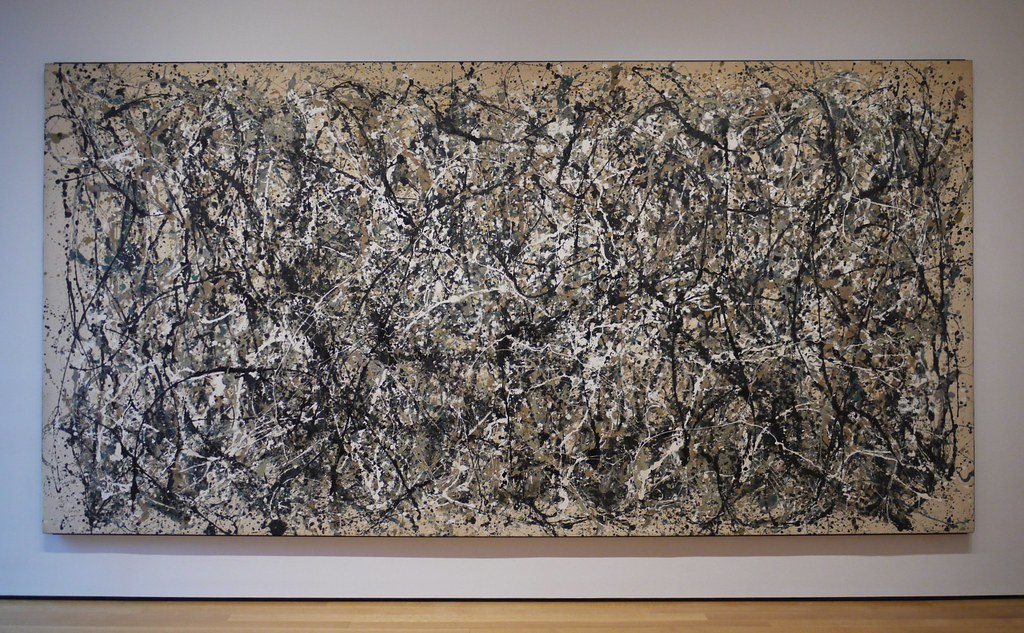 Jackson Pollock was born on January 28th, 1912 in Cody, Wyoming.  His full name was Paul Jackson Pollock and he had four older brothers.  Papa Pollock was named LeRoy and his mother was Stella May.  They were of Irish descent and grew up in Iowa.  Jackson’s father was born with the surname McCoy.  His parents passed when he was young and he took his foster parent’s last name, Pollock.  Jackson was not nicknamed J P, but the reclusive painter had a vital role in evolving the abstract expressionist art movement.

LeRoy worked as a farmer and a land surveyor for the government.  Stella weaved clothes and sold dresses.  Before Jackson experienced his first birthday, the Pollocks headed to San Diego.  They moved to Arizona and back to California.  The artist attend school at Manual Arts High School in Los Angeles, California.  He was classmates with the painter Philip Guston.  They were both expelled for distributing a self-published satirical newsletter about the school.  It was Pollock’s second expulsion of the year (1928).

Jackson moved to New York City in 1930 after his brothers Charles and Frank convinced him to make the move.  He enrolled at the Art Students League of New York and was taught by the famous muralist Thomas Hart Benton.  Benton specialized in Midwestern Regionalist art that focused on normal society.  Grant Wood (American Gothic, 1930) was another member of the Regionalist movement.  Pollock had no interest in Benton’s subject matter, but absorbed his work ethic and approach to painting.

In the middle of the 1930’s Jackson discovered liquid paint.  The Mexican muralist David Alfaro Siqueiros introduced the experimental paint to him during a studio visit.  Pollock developed numerous techniques with the paint and began to pour it on the canvas in the beginning of 1940.  He completed several pictures using his new method, including Male and Female (1942), Composition with Pouring I (1943) and Composition with Pouring II (1943).  The pour would morph into a drip technique sometime later.  Jackson would apply it to canvases laid across the studio floor as he worked from above.

The Works Progress Administration (WPA) Federal Art Project hired Pollock between 1938 and 1942.  He struggled with alcoholism around the same time and underwent psychotherapy under prominent Jungian psychologist Joseph Lewis Henderson.  The doctor encouraged Jackson to express himself with his artwork.  He made progress and by 1943 he initialed a gallery contract with Peggy Guggenheim.  Peggy also hired him to paint the entryway to her new townhouse.  Pollock responded with Mural (1943) and it was well received by the critics.

The artist Lee Krasner met Jackson Pollock in 1942 at the McMillen Gallery.  They were both featured in an ongoing exhibit.  They connected over their artwork and were married by the end of 1945.  The new couple moved to Springs, New York near East Hampton on Long Island.  They purchased a wooden home with a barn in the backyard.  Jackson converted the barn into his studio.  His most famous pieces were created there.

The couple enjoyed a quiet home life and influenced each other.  Krasner is credited with introducing Pollock to contemporary art and familiarizing him with modern techniques.  She also connected him with other artists and collectors.  The drip period began in 1947 and Jackson exploded in productivity until 1951.  His fame increased too.  The height of it carried into 1952 and the drip style was largely abandoned.  He made several black pouring paintings and they were shown at the famous Betty Parsons Gallery in New York.

Alcoholism continued to plague Jackson.  He created his last two artworks called Scent and Search in 1955.  He did not paint in 1956, but made sculptures.  They were generated with gauze, wire and plaster and formed on textured surfaces that resembled his paintings.  His addictions caused a strain on his marriage and the couple moved apart.  Pollock died in a single-car crash on August 11, 1956.  He was forty-four years old.  Alcohol was the cause of the accident.  There were two other passengers and one survived.  The accident took place near his home.  The Museum of Modern Art (MoMA) hosted an exhibit in his memory during the same year.  Several others were constructed over the following decades.  He was buried in the Green River Cemetery in Springs, New York.

Pablo Picasso, Joan Miró and Thomas Hart Benton were Pollock’s main influences.  His use of household paints and corroded brushes were his trademark.  The atypical style and use of tools were the origin of action painting.  He abandoned traditional naming conventions for his paintings.  He chose to number them instead.  The lack of a title enhanced the abstraction and made it harder for the viewer to tie the meaning to figurative elements.  The observer was forced to find their own connotations that brought them closer to a pure painting.

The National Gallery of Australia purchased Jackson’s Number 11 (1952) for two million dollars in 1973.  It was the most expensive modern painting purchased at that point in time.  It became the focal point of the entire museum.  In 2006 his No. 5 (1948) was bought by a private investor for one hundred forty million dollars.  This set the record for most expensive painting.  Several other paintings have now eclipsed the price.  His Number 17A (1948) was one of them.  The businessman David Geffen dropped two hundred million dollars to acquire it in 2016.

No. 12 (1949) sold for close to twelve million in 2004.  Number 28 (1951) generated over twenty million in 2012.  A year later Number 19 (1948) made almost sixty million dollars.  The critics have been kind and harsh over Jackson Pollock’s career.  However, the prices his paintings continue to sell for are proof that they demand attention.  His life was as chaotic as his work.  He left the world much too soon.

“Painting is no problem. The problem is what to do when you’re not painting.”