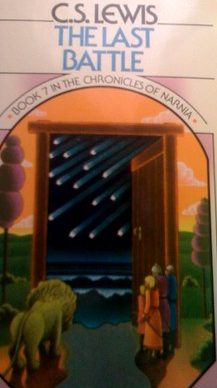 The Last Battle is the last book in The Chronicles of Narnia.  It’s the final tale in the series written by C.S. Lewis and the closing story in the modern chronology.  It was published a year after The Magician’s Nephew by The Bodley Head (1956).  The infamous Pauline Banes enhanced the adventure with her illustrations.  The events of The Last Battle take place after The Silver Chair and Jill and Eustace return for the epic conclusion.

Shift and Puzzle find a lion’s skin at Caldron Pool near the edge of a waterfall.  Shift is an ape and Puzzle is a donkey.  The ape suggests that he should craft the skin into a winter coat for the donkey.  Puzzle is puzzled and claims that it would be disrespectful to Aslan to wear it.  Shift overrules the sentiment and fashions the jacket with the lion head still attached.  He ties it on Puzzle and tells the donkey that he is now indistinguishable from Aslan.  Puzzle sighs and agrees to wear it.

Weeks pass and King Tirian and his friend Jewel explore the forests of Narnia.   Tirian is the last king of Narnia and a descendant of Caspian.  Jewel is a unicorn.  The pair are searching for Aslan after rumors of his return circulated the lands.  A centaur appears and warns them that the news could be false.  The stars reveal that a disaster is eminent and the stars never lie.  Someone is cutting down the Talking Trees for lumber and needs to face judgement.  King Tirian agrees and decides to abandon his search and find the perpetrators instead.  The centaur cautions the king and tells him the enemy is gathering numbers.  Tirian refuses to wait and pushes on with Jewel.  He sends the centaur to Cair Paravel to assemble reinforcements.

Jewel and Tirian continue their investigation.  They find a rat that is transporting the fallen trees to Calormene.  Talking horses are carrying the load.  The king is furious.  He questions the rat and learns that Aslan has given the orders to move the cargo.  Tirian is in disbelief and is succumbed with rage.  Jewel and the king kill two of the Calormene guards to quench their bloodlust.  They are able to escape, but their conscious gets the best of them and they turn themselves in.

The duo prepares to face the judgment of Aslan and meet Lord Shift.  Shift is enslaving the animals to carry out his bidding.  He is using Aslan as a method for unchecked power.  A lamb argues with the ape and asserts that Aslan would never issue the demands that Shift is claiming.  He continues and says that the lion would not associate with Tash, the evil god of the Calormenes.  Shift mocks him and states that Aslan and Tash are the same being and that the world is moving in a new direction.  King Tirian disagrees and lashes out at the ape.  Shift’s men overcome the king and render him unconscious.  The king is taken away.

Tirian wakes up tied to a tree.  He is hungry and injured.  Jewel is missing.  A small group of animals tend to his injuries, but refuse to release him.  They do not want to anger Aslan further.  The king doesn’t believe that the lion could be so evil and thanks them for their help.  The animals tell him that they think Aslan is punishing everyone for something society did and that he appears for a brief moment each night on top of a nearby hill.  Time passes and Aslan appears on the hill.  The animals run away and Tirian deduces that he cannot tell whether the being on the hilltop is Alsan or not.

Night rolls in and Tirian reflects on the past.  He recounts old stories where human children came to Narnia’s aid in times of great need.  He calls on their assistance and passes out.  Visions invade his dreams and he wakes up.  Eustace Scrubb and Jill Pole appear and release the king.  He learns that they were the only people young enough to return to Narnia.  The trio find some supplies and weapons and get some rest.

Tirian sneaks up the hill with Eustace and Jill.  He rescues Jewel and Jill uncovers the Aslan imposter.  Puzzle is ashamed and joins their party.  A group of dwarfs pass by.  Tirian decides to enlist them by using Puzzle as bargaining chip.  They do not care about the lies and decide to remain independent.  A lone dwarf named Poggin abandons his kin and joins the cause.  Everyone goes back to their camp.  The weather patterns shift and darkness falls on the land.  Tash appears and Poggin tells them that the demon’s arrival is going to shock the Calormenes and Shift.

The good guys decide to meet up with the centaur and build their forces.  An eagle interrupts their movements and tells them that the centaur is dead and never made it to Cair Paravel.  Narnia has fallen and the Calormenes have taken over. The king pivots and resolves to use Puzzle as a way to convince the animals of Shift’s lies.  The ape is two steps ahead and announces that Aslan is no more and there is an imposter.  There is a new being named Tashlan (portmanteau of Tash and Aslan) who is the supreme being of the world.  The animals succumb to terror and do not want to anger the demon that resides in the hilltop stable. The last battle is about to begin.

King Tirian shows his resolve and the last battle begins.  The group launches a surprise attack in the name of Aslan and the fighting continues.  Narnians and Calormene troops clash.  The death toll rises.  Eustace is captured and Tirian throws Shift into the stable.  Tash eats the ape.  The demon moves to Tirian and the Friends of Narnia materialize (Kirke, Polly, Peter, Lucy and Edmund).  Big Pete banishes Tash.  Tash disappears.  Aslan appears.  The last battle ends.

Aslan opens a doorway and his followers gather around him.  He tells them that Narnia is beyond repair and dragons drift in.  The beasts consume the world and nothing is left.  Father Time extinguishes the stars and sky.  He has Peter shut the door and everyone moves into Aslan’s country.  Characters from the other books join the march through the new land.  Aslan tells the friends that they have passed away in a train accident on Earth and can live forever in the fresh world.  The new story is about to begin and will last forever.  The Last Battle and the other novels will too.

7 comments on “The Last Battle”