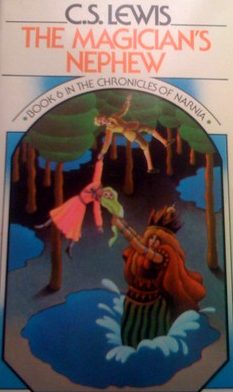 The Magician’s Nephew was written by C.S. Lewis.  It is the sixth book in the Narnia series and the first in the modern ordering of the epic fantasy.  Pauline Baynes provided the pictures between the pages and The Bodley Head was the publisher.  The novel was released in the middle of 1955.  The events of the story act as prequel to the series and are the setup for The Lion, the Witch and the Wardrobe.  A magician and his nephew serve as the main protagonists and are the premise for the title’s name.  The previous story (The Horse and His Boy) provided the author with the adequate experience to rename the book.  The Magician and His Nephew was transformed with the power of contraction.  Insert an apostrophe and words disappear.  That C.S. knows how to name them.  He deserves an apostrophy.

Digory Kirke is a young lad in London.  His mother Mabel and him live with his Aunt Letty and crazy Uncle Andrew.  Mable is dying and facing her last days.  Little Kirke meets a neighborhood girl.  Her name is Polly Plummer.  It is unclear if she knows anything about plumbing.  She does know how to sneak into the neighboring homes through the attic and takes Digory with her.  One day, they are creeping into an abandoned home’s attic and find a hidden room.  It is deserted and furnished.  Polly enters and finds something wonderful.

She finds a tray.  There are yellow and green rings on it.  Digory is hypnotized by the tray.  Not every day do you find a tray.  The rings are great, but that tray.  There are so many things you can do with a tray.  Young Kirke is categorizing the uses for trays and Uncle Andrew enters.  He locks the door.  It turns out they found his forbidden study and he wants to run an experiment.  Digory just wants that tray.

Polly snaps her friend out of it and they turn to leave.  Uncle “A” offers her a yellow ring.  Digory insists they depart.  The tray was all he wanted.  Polly is tempted and picks up one of the rings.  She vanishes and Andrew explains that they are magic rings.  The rings hold the power to transport anyone who touches it to another world.  He forged them from a box of magical dust.  The yellow ones teleport you to the Other World and the green ones take you back.  Digory sighs and pockets the green rings.  He knows he has to save his friend, but hopes there are trays in the Other World.  Otherwise, what’s the point.  Right…Polly.  He takes the yellow one and disappears.

The magician’s nephew reappears in a forest with pools scattered around the trees.  The air is calm and the vibes are alluring.  He forgets the past and finds a girl.  They start talking and their memories return when they notice they are both wearing yellow rings.  Polly and Digory decide to dip into the pool that takes them home.  Digory has second thoughts and wonders where the others lead.  They discover they go to different worlds and the green rings are the key.  The yellow ones take you back to the forest.  The pair hop into an unknown pool.

The world is silent and dark.  A red sun provides a shallow light.  A ruined castle is the only structure.  There is not a tray in sight.  They explore the remains and find a series of human statutes.  The kids walk past them and admire the artistry.  The last statue is of a gorgeous queen.  Digory forgets about trays and finds a stone pedestal with a bell and a hammer.  There is an inscription that taunts the strangers to ring the bell.  Polly doesn’t think they should.  Digory does not care and strikes the bell.

The sound is loud and the castle falls apart.  The sound dissipates.  The queen wakes up.  Polly tells her their situation and how they arrived.  The queen nods and talks about her power.  Her name is Queen Jadis and she destroyed her world by speaking the Deplorable Word.  Jadis continues and mentions that the city they are in is named Charn.  The duo is not charmed and turned off by the genocide she committed.  The queen is calm and demands they return to their world.

The children disagree with her proposition.  They put on their rings and the Queen grabs onto Polly’s hair.  Everyone materializes in the forest.  Jadis is depleted and has no power.  Digory and Polly fall into the pool that takes them home.  The queen manages to hold onto Digory and the trio appear in Uncle Andrew’s study.  Jadis lists her demands and Andrew leaves to find her a cab.  The magician’s nephew apologies to Polly and they both return home.

Digory and Aunt Letty are not pleased with the new house guest.  Uncle “A” is awestruck by her beauty.  A fight breaks out and Jadis goes outside.  She steals a cab and ends up crashing it into a lamppost.  The police arrive.  The queen finds herself cornered.  Her spells are useless, but she has inhuman strength.  She strips a piece of the lamppost with her bare hands and uses it as a weapon.  Polly enters and grabs Digory and the queen.  She puts on the ring and they go back to the forest.  Uncle Andrew, the cab driver and his horse are there too.  They were caught in the confusion and had contact with the ring bearer.

They fall into a pool and hear someone singing.  Every lyric brings life to the new world.  The song is recited by a lion.  Aslan continues and Narnia is born.  Jadis throws the bar from the lamppost at the creator and it has no effect.  She flees and the bar grows into a full-sized lamppost.  The animals of Narnia are made and Aslan gives them instructions.  He transports the cab driver’s wife into Narnia and crowns her and the driver as the first Queen and King.  He turns to the magician’s nephew.  He tells him that he needs to take an apple from a secret garden and plant it in Narnia to atone for bringing the evil queen into his domain.

Aslan gives the horse wings and the horse takes the children to a mountain.  They find the garden.  Digory takes a silver apple.  Jadis is there and tells him to take a bite.  She already did and tells him the apple grants immortality and can save his mother.  He refuses and takes the fruit to Aslan.  The lion instructs him to plant it to protect the land from evil.  A magical tree appears.  Digory is allowed to pluck an apple from the new tree to save his mom.  He does so and the lion tells them to bury their rings when they return home.

The kids and the uncle go back.  Digory gives his mom the apple.  She eats it and is healed.  He plants the apple core and the rings in their garden.  A tree grows.  Years pass and the magician’s nephew is now a professor.  Middle-aged Kirke builds a wardrobe out of the remaining wood.  The saga continues.

2 comments on “The Magician’s Nephew”