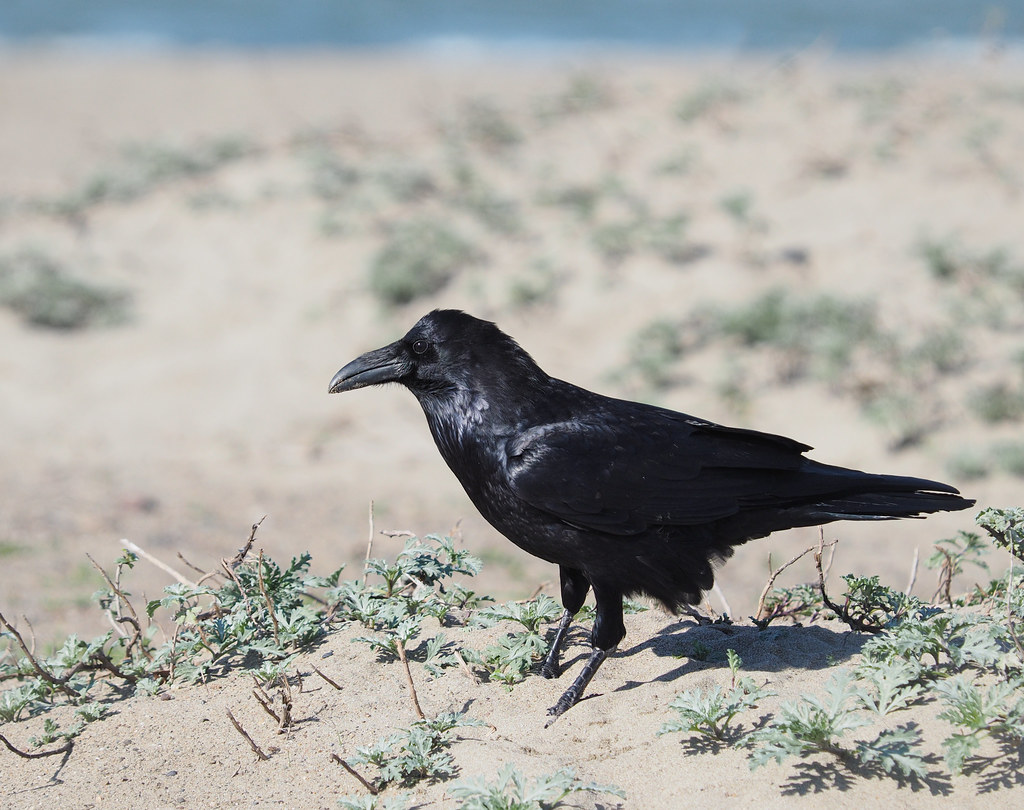 Common ravens are passerine or perching birds.  They are located throughout the northern hemisphere.  The all-black birds are members of the Corvus genus that includes crows and rooks.  Western and northern ravens are pseudonyms for the common raven.  Eight subspecies have been identified.  There is little variation between their appearance.

The species name Corvus corax has remained unchanged since its inception.  Carl Linnaeus coined the original term in 1758 in his tenth edition of System Naturae.  The Latin word for raven is Corvus.  Corax is derived from the Greek word κόραξ that translates to crow or raven.  Germanic and Old Norse languages used the word hrafn.  The Scottish and French used corbie and corbeau for the bird and carrion crows.

Adult ravens are two feet to twenty-six inches long.  Their wingspan stretches between forty-five and fifty-one inches.  They are the heaviest passerine birds and weigh up to four and a half pounds.  The lightest are one and a half pounds.  Northern birds are larger than their southern relatives who have smaller bills.  Ravens have a black iridescent plumage and dark brown eyes.  Their throat feathers are pointed.  The lowest part of the neck is colored gray.  Juveniles have identical plumage and blue-gray eyes.

A heavy black beak and wedge-shaped tail differentiate the bird from a crow.  The rustle of a raven’s feathers is eloquent.  Their deep croak is more sonorous and resounding than their relatives.  White ravens are present in the wild and primarily found in British Columbia.  The leucitic birds lack the pink eye color of albinos.  Over thirty distinct vocalizations have been recorded.  They are used for social interactions and have a plethora of pitch variations.

Common ravens are opportunistic feeders with a varied omnivorous diet.  Some are carrion scavengers that eat decaying meat, beetles and maggots. Others indulge in buds, acorns, fruit, berries and grains.  Small amphibians, mammals, birds, invertebrates and reptiles are eaten without discretion.  Animal feces and human food waste is consumed as nutrients.  Unguarded eggs are pillaged and an easy snack.  The predation of California condor eggs is an ongoing problem for the critically endangered bird.

North American ravens often wait for blue jays and crows to feed before approaching a food site. The size and defensive abilities of the bird have left few natural predators.  They are volatile and skilled at defending their young.  Eagles and owls sometimes succeed in stealing eggs.  Attacks from red-tailed hawks, goshawks, eagles and owls are fruitless against adults.  Success is possible against  isolated juveniles.  Coyotes, cougars and lynxes will attack.  The attempts from mammals are infrequent and happen due to the lack of available meat.

Mated pairs travel together.  Adolescents tend to travel in flocks.  Courting begins at an early age.  Bonds form after two to three years.  Mates stick together for life and live in the same location.  Single males will infiltrate a couple if the father is away.  Territory is secured before a nest is built.  The domain is defended with aggression.  Stick, roots, mud, bark and fur are used to build the dwelling.  It is fastened in large trees, cliff edges, utility poles and abandoned buildings.

Females lay three to seven pale and blotched eggs.  Incubation lasts up to three weeks.  The female warms the eggs alone.  The male stands guard.  The young begin to fly after a month or so.  Both parents are responsible for securing food for the brood.  The adolescents leave six months later.  Captive ravens can live over forty years.  Wild birds perish after fifteen.  The longest lifespan recorded was twenty-three years and three months.  The chronicle is among the longest across all passerines.

A raven’s brain is one of the largest of any avian species.  The birds are one of four animals that have displayed displacement or the ability to communicate about events or objects in distant space and time.  Humans, ants and bees are the other three.  When an unmated raven discovers a large carcass protected by a mated pair, they will communicate the location to their flock.  The unmated group will fly to the source after learning the location and chase away the mated pair to feed.  Some biologists argue that the evolution of linguistic displacement is the single most important advancement of its kind.  Humans and ravens are the only vertebrate to achieve this feat.

At four months of age, common ravens are on a similar plane with adult orangutans and chimps in tests of social learning, casual reasoning and theory of mind.  One study showed they are capable of recognizing reciprocal trade interactions and can retain memory of the events for long periods of time.  The birds will stop cooperating with group members that cheat during shared tasks.  Some will call wolves to the sites of fresh dead animals to gain access to more accessible scraps.  Others will make toys out of broken twigs.  The craftsmanship is rare in the wild.