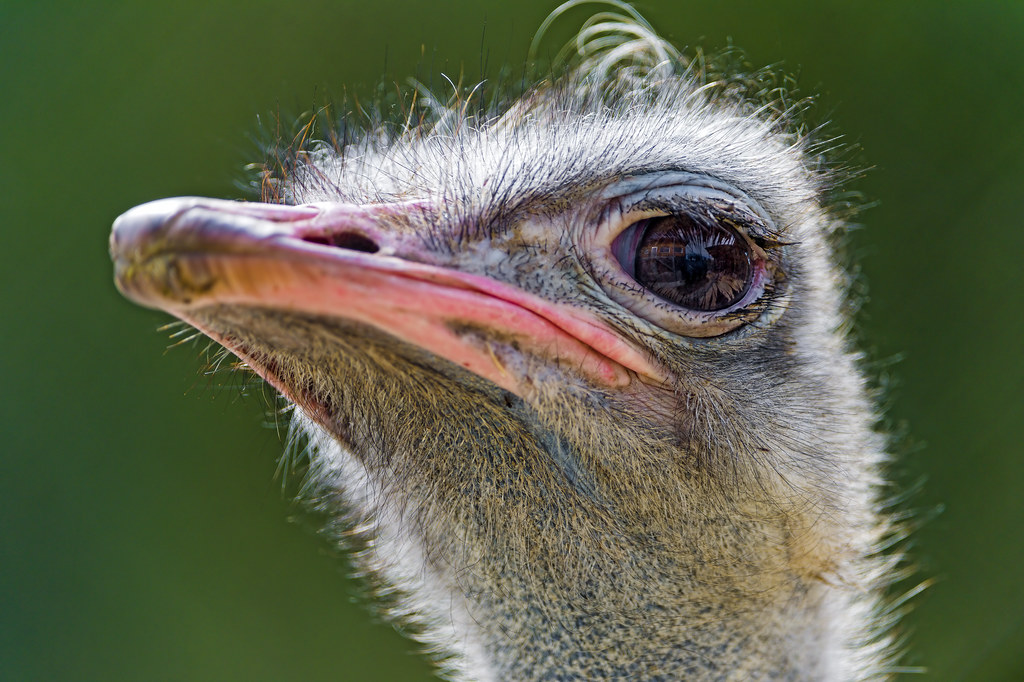 The common ostrich or ostrich is a flightless bird that is native to Africa.  It is a member of the Struthio Genus and belongs to the Struthioniformes Order with emus, rheas, cassowaries, moa and kiwi.  The broad classification is somewhat nebulous and often debated.   Big Carl Linnaeus was the first to list the bird in Systema Naturae.  The scientific name Struthio camelus is Latin for ostrich camel and named for its arid habitat.

The birds weigh between one hundred forty and three hundred pounds.  Large males can exceed three hundred and fifty.  Females have a height that ranges from five feet seven inches to six feet seven inches tall.  Males stretch up between seven feet and nine feet two inches.  Chicks grow ten inches per month and weigh one hundred pounds by their first birthday.  Common ostriches live from forty to forty-five years in the wild.

The feathers are black.  The tail and primaries (flight feathers) are white.  The head and neck are bare and covered with a thin down layer.  Female necks have a pink hue.  Males are sometimes gray.  Ostriches have the largest eyes of any land vertebrate with a two-inch diameter.  The trait allows them to spot predators from afar.  The head and bill are minuscule compared to their size.  The legs are adorned with tough scales that are colored black in females and red in males.  Each foot has two toes.  Most birds have four.  The adaptation assists in running.  Forty miles per hour is obtainable.  Each stride covers ten to fifteen feet.  They are the fastest two-legged animal.

The wings are used to stabilize running patterns.  The feathers lack hooks that smooth them out for flight.  They instead are fluffy and help with insulation.  The fluff helps them tolerate a broad range of temperatures in their habitat.  Today they are found in the open savannas and Sahel of Africa located south and north of the equatorial forest zone.  In southwest Africa they populate the desert.  Arabian ostriches in the Middle East have been hunted out of existence by the middle of the twentieth century.  Feral ostriches have escaped from Australian farms and have established a wild community in the outback.

Seeds, grass, fruit, flowers and shrubs make up the majority of the bird’s diet.  The occasional locust or small reptile are consumed when available.  Common ostriches have no teeth.  They opt to swallow pebbles that help grind food in the gizzard.  It can hold almost three pounds of food.  Up to forty five percent is sand and pebbles.  Several days can pass without water.  Metabolic water and moisture from plants maintains the balance.  They can survive while losing a quarter of their body weight through dehydration.

Ostriches travel in pairs or alone during the winter.  Less than sixteen percent of sightings contained more than two birds.  They live in nomadic groups during the breeding season.  The top hen leads five to one hundred other birds.  Everyone travels together with zebras, antelopes and other grazing animals.  The birds are diurnal and active in the morning and afternoon.  Males claim territories of up to seven square miles.

When threatened they run from predators or lay low to the ground.  Their powerful legs are capable of landing killing blows.  Nile crocodiles, lions, leopards, hyenas, cheetahs and African hunting dogs hunt common ostriches of all ages.  Warthogs, mongoose, jackals and birds of prey stalk adolescents and nests.  The speed and kick of the bird help deter most of the treats and adults rarely perish.  Under ten percent of chicks survive.

Sexual maturity is reached between two to four years of age.  Females mature six months sooner than males.  The boys perform mating dances with their wings.  When a female arrives, the routine escalates and the female runs a circle around him.  Eggs are laid in communal nest.  It is two feet deep and ten feet wide.  The dominant lady bird goes first.  Before the nest is covered, she discards extra eggs from weaker females.  Around twenty remain.  Common ostrich eggs are the largest of all birds.  They are the smallest relative to their size.

The girls incubate the eggs throughout the day.  The boys have the night shift.  Their alternate coloration helps hide the location of the nest.  The females blend into the sand in the daylight and the black feathered males are undetectable after nightfall.  The ordeal lasts up to forty-five days.  The fathers defend the chicks and teach them how to feed.  Both parents teach them life lessons.  The oldest common ostrich in captivity lived for sixty-two years.