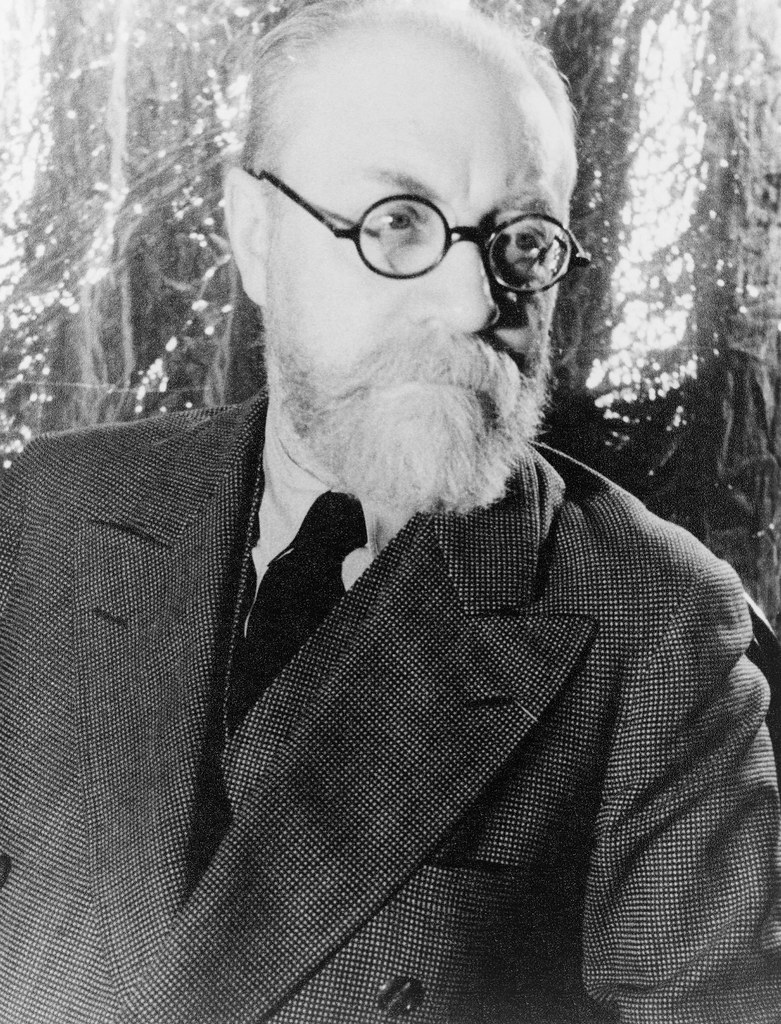 Henri Émile Benoît Matisse was a French painter, sculptor and printmaker.  He was born in Le Cateau-Cambrésis, France on December 31, 1869.  Papa Matisse was a prosperous grain merchant.  Henri was the eldest and was raised in Bohain-en-Vermandois, Picardie, France.  He studied law in Paris in 1887.  He began to paint two years later while recovering from a bout of appendicitis.  It became a passion.  He decided to become an artist.  The career change saddened Papa Matisse.  Nothing would stop Henri.

The artist studied at the Ecole Nationale des Beaux-Arts in 1891.  They symbolist painter Gustave Moreau was his mentor.  Matisse started painting landscapes and still lifes.  He polished his craft.  Japanese Art, Édouard Manet and other modern artists were his first influences.  He traveled to an island off of the coast of Brittany to study under John Russell in 1896.  Russel the muscle was an Australian impressionist painter.  Russ taught Henri Matisse color theory and introduced him to Vincent van Gogh.  The exposure morphed his color palette from earth tones to bright ones.  His style changed.  Time passed.

In 1898 he learned from J. M. W. Turner.  The man with three initials or the cubed one was an English romantic painter.  Matisse returned to Paris and worked with other artists.  He immersed himself in their work.  Debt accumulated by acquiring paintings from those he admired.  Art created by Paul Gauguin, Paul Cézanne and Vincent V. were among his personal collection.

Henri’s work took on a somber tone in 1902.  The marketable shift was introduced to alleviate his debts.  He completed his first sculpture The Slave in 1903.  His first solo exhibition was debuted at Ambroise Vollard’s gallery in 1904.  It was unsuccessful.  He experimented with pointillism and a neo-Impressionist style and completed Luxe, Calme et Volupté (1904).  In 1905 he participated in a group show at the Salon d’Automne with other Fauvism painters.  The annual exhibit was in Paris.  His showcase canvas Woman with a Hat was bought by Gertrude Stein.  Henri Matisse had arrived.

The pundits started to critique and write about his art.  The outcome was divisive.  High praise was met with vehement rebuke.  His paining Nu blue (1907) was burned in effigy in a show in Chicago in 1913.  Henri moved on as his career blossomed.  His studies continued.  He absorbed Primitivism and African art in Algeria in 1906.  His first encounter with Islamic Art was in Munich in 1910.  He visited Morocco in 1912 and again in 1913.  Somewhere in Tangier he introduced the color black to his work.  L’Atelier Rouge (1911) marked the accumulation of his trainings.

He met his rival for the first time in the Spring of 1906.  Pablo Picasso was eleven years younger and became a lifelong friend.  Matisse drew inspiration from nature.  Picasso worked off of pure unadulterated imagination.  The two integrated each other’s social circles and expanded their boundaries.  Henri moved to a suburb of Nice in 1917.  His approach softened with his surroundings.

The artist collaborated with European artists and a few Americans in the 1920s.  His style changed again in the thirties.  He completed a triptych mural in 1932.  It was titled The Dance II and commissioned by the art collector Albert C. Barnes.  The project reinvigorated him past his quieter period.  He stayed in France during the occupation of World War II.  His work continued.  The war ended.  The country healed.

He contracted abdominal cancer in 1941.  An operation locked him in a wheelchair.  Sculpture and painting proved too difficult.  He worked with a group of assistants to create paper collages.  They started small and grew into murals.  The art resonated into a mixed medium of dimensional complexity that sat somewhere between paint and sculpture.  Matisse moved to Vence, France in 1943.  He finished an art book of cut-paper collages titled Jazz.  It was published in 1947.  He began his decorative design for the Chapelle du Rosaire de Vence a year later.

Henri established the Matisse Museum in Le Cateau, France in 1952.  It houses one of the largest collections of his artwork today.  On November 3, 1954 he passed away from a heart attack.  The legend was eighty-four years old.  His final resting place is in Nice.  Matisse’s work continues to increase in price.  His sculpture Reclining Nude I (Dawn) generated nine million dollars in 2002.  The Plum Blossoms (1948) was purchased for twenty-five million by the Museum of Modern Art in 2005.  A cast of one of his sculptures earned forty-nine million in 2010.  Les Pivoines (1907) fetched north of nineteen million in 2012.  Odalisque couchée aux magnolias (1923) sold for over eighty million in 2018.  The market shows no signs of slowing.

“We ought to view ourselves with the same curiosity and openness with which we study a tree, the sky or a thought, because we too are linked to the entire universe.”