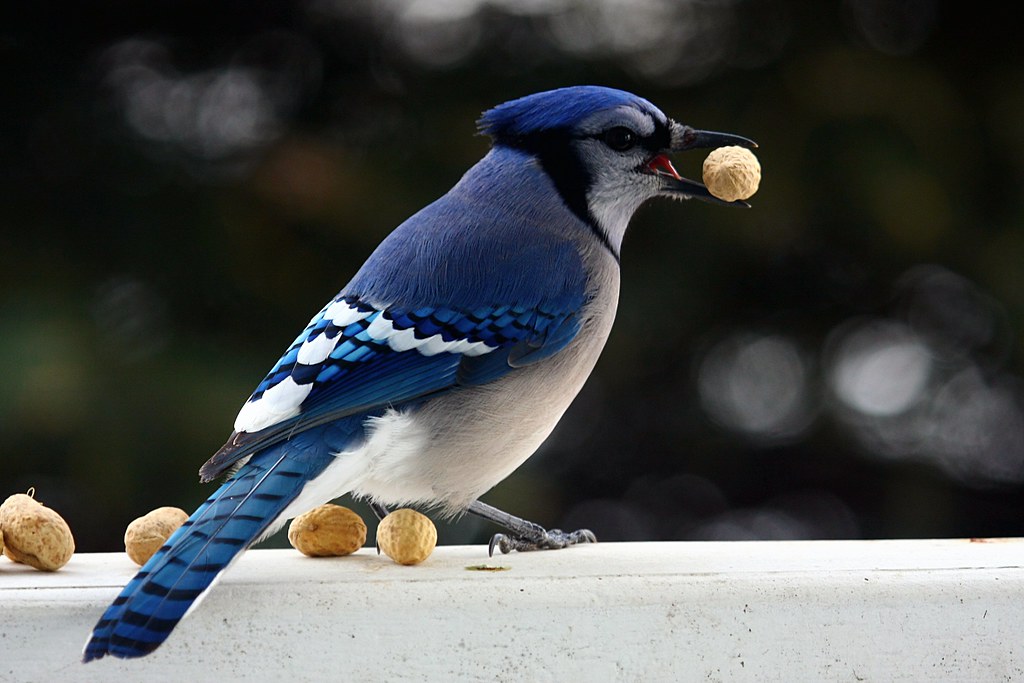 Blue Jays are passerine or songbirds.  They are also called perching birds and half of all birds can be categorized as such.  There are over six thousand five hundred cataloged species spread over one hundred forty families.  Blue Jays are members of the eastern North American Corvidae family that includes jackdaws, ravens, crows, rooks, magpies, choughs, nutcrackers and treepies.  When they organize in the east, they carry more authority than the Five Family crime syndicate of New York City.  Colloquially…the mafia.

The first description of the Blue Jay was published in 1731 in the Natural History of Carolina, Florida, and the Bahamas by the English naturalist Mark Catesby as Pica glandaria cærulea cristata.  Carl Linnaeus furthered the research in the 1758 edition of Systema Naturae.  In 1838 the French ornithologist Charles Lucien Bonaparte logged the bird as Cyanocorax cristatus in A geographical and comparative list of the birds of Europe and North America.  Big Charlie was the younger brother of Napoleon I.  His career choice was shrouded in less bloodshed.

In 1845 Hugh Edwin Strickland assigned the jay its modern scientific name Cyanocitta cristata.  Strickland was a British naturalist, systematist, geologist and ornithologist.  Big Hugh was studying geological strata near a railroad when a train came roaring by.  He jumped out of the way onto the opposing tracks and was killed by an inverse train travelling in the opposite direction.  Strickland was forty-two.

The Cyanocitta genus stems from the Greek word for blue (kyaneos) and the phrase kitta that means jay or chattering bird.  The talkative blue bird references the brilliant blue plumage.  The Latin saying that forms the specific name cristata translates to tufted or crested.  The avian crest is a dominant blue.  The jay measures between nine to twelve inches from the tail to the bill and weighs about seventy to one hundred grams or two and a half to three and a half ounces.  Northern blue jays weigh more according to Bergmann’s rule.  Floridian birds fall on the low end.

A dominant crown of feathers sits upon the bird’s head.  It raises and lowers according to its mood.  Aggressive and animated jays raise their feathers.  Frightened birds push the crown outwards in a defensive position.  It is lowered flat against the head when they are relaxing or feeding or taking in the opera.  The majority of the feathers are blue.  The face and underside are white.  The wings and tail are mixed with blues, whites and blacks.  The eyes, legs and bill are full black.  Females and males are identical in coloring.  The male is a bit larger.  Black coloring on the throat and face are highly variated and used as interspecies recognition.  The blue is displayed through light interference and not from pigment.  If a feather is crushed, the color disappears with the structure.  The true coloring is melanin and a form of structural coloration.

Blue jays are omnivores.  Vegetables compose seventy five percent of their diet.  Strong beaks are used for cracking nuts and consuming seeds, grains and corn.  Their favorite food is peanuts, which they eat without deshelling.  They will scavenge scraps and eat small bits of meat and invertebrates.  The jays are kind specimens and subservient at community feeding grounds.  Other birds and squirrels take precedent.

The birds are slow fliers when left alone and average speeds between twenty and twenty-five miles per hour.  Their relaxed speeds make them easy prey for owls and hawks in open terrain.  Opossums, racoons, crows, snakes, cats and squirrels are other common predators.  Blue jays are boisterous and will scream if they spot an aggressor.  The alert benefits other species within the habitat.  They sometimes impersonate the calls of predatory birds to find out if their foes are close and to clear competition from food sources.

They are territorial and curious.  Blue jays are intelligent and will play with reflective objects.  The birds have been spotted carrying aluminum foil and bottle caps until the lose interest.  They use objects to obtain food and display tool use in captivity.  There are no recorded instances in the wild.  Caged birds will attempt to open the door of their enclosure and escape.

Mating occurs in the spring and peaks around April and early May up until July.  Bushes and trees are used for nesting.  Evergreens are their preferred species.  They are not selective and will sometimes create them within mailboxes or abandoned robin nests.  Roots, bark, moss, cloth, paper, feathers, mud and twigs are used to build the nest.  It is formed ten to thirty feet from the ground.  The jays are monogamous and bond for life.  The male and female share the building duties.  The ladies brood the eggs alone.  Three to six eggs are laid and incubated for three to four weeks.

The young can fly three weeks after birth.  The new family will forage and stay together until the fall.  Sexual maturity is reached after one year.  The average lifespan is seven years.  The oldest on record was twenty-six years and eleven months old.  The second was seventeen and a half.   The birds are susceptible to West Nile virus, but the disease has not impacted their numbers.  Blue jays make several sounds and can learn to mimic human speech.  “Hello fellow humans.”