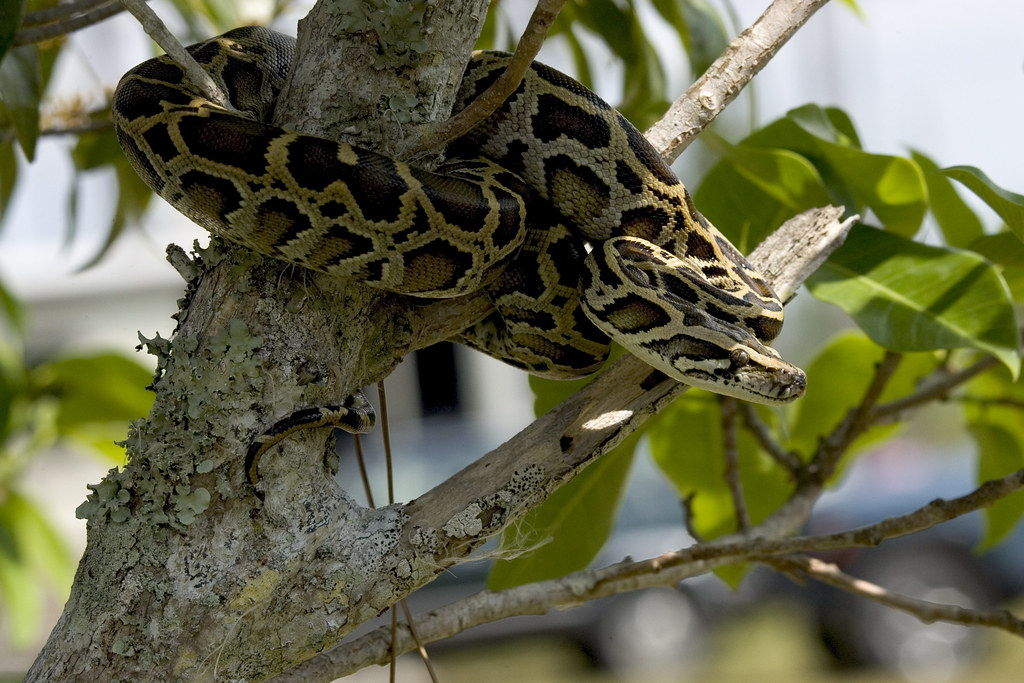 Pythons wear hardhats.  They are nature’s constriction workers.  The python genus is a member of the Pythonidae family.  There are around ten species.  Seven were recognized as valid taxa in 1993.  The snakes can be found in the Eastern Hemisphere in the subtropics and tropics.  They are non-venomous.

Python is a programming language that first appeared thirty years ago in 1991.  It was designed by Guido van Rossum.  Big G is from the Netherlands.  The code emphasizes readability with the use of indentation.  The language is object oriented and aims to help programmers develop lithe code.  It can be used for large or small projects.

The Latin word pȳthon and the Greek phrase πύθων are the origination of the term python.  The old language translates to serpent slain.  It is a reference to the Pythius in an old Apollo myth.  François Marie Daudin coined the official name python in 1803.  The descriptor covered non-venomous snakes with a split tongue and flecked skin.

The Indian Python (p. molurus) has yellow or white scales covered in several brown patterns.  The species found in Assam and the forests of Western Ghats are darker than their Eastern Ghats counterparts.  They grow to about ten feet in length.  Some exceeded twelve feet.  The largest recorded was fifteen feet and one hundred ten pounds.  The snakes require a permanent source of water and are docile.  The timid species will rarely attack when provoked.

Mammals are the preferred food choice of the carnivore.  Birds and other reptiles are consumed on occasion.  The prey is constricted and subdued after a fast lunge.  The head of the snack is swallowed first and digestion begins.  The victim is helpless and cannot flee.  A row of reverse saw shaped teeth prevent escape from the tomb of their jaw.  Large courses are followed by several weeks of fasting.  The longest abstinence period documented was two full years.

Female Indian Pythons lay up to one hundred eggs.  Mamma P will incubate her future young.  The newborns grow fast and arrive into the world at around two feet in length.  Artificial incubation is possible for unattended eggs.  The IUCN Red List has the species listed as near threatened.  Constant evaluation is required to safeguard their survival.  The fictional character Kaa from Rudyard Kipling’s The Jungle Book (1894) was an Indian Python.  The snake was portrayed as an antagonist in Disney’s animated adaptation, but was an ally of Mowgli in Kipling’s original.

The Burmese Python (P. bivittatus) is one of the largest snakes on the planet.  Their normal length measures fifteen feet.  Sightings of snakes in the low twenty-foot ranges have been recorded.  The heaviest captive Burmese was eighteen feet ten inches long and weighed four hundred three pounds.  The female was kept at Serpent Safari inside the Gurnee Mills Mall in Gurnee, Illinois outside of Chicago.

The species are brilliant swimmers and live near water.  They can dwell in the aquatic abyss up to thirty minutes.  Their prehensile tails make them excellent climbers.  The carnivors subdue their prey through constriction and have the same pallet as the Indian Python.  The prolific feeders will hunt rabbits, foxes and racoons.  They have reduced and eliminated some mammals in their habitat due to high predation levels.  The IUCN Red List has placed them on their vulnerable list.  Over thirty percent of the population has decreased over the last few decades from hunting and habitat loss.

The first Burmese sighting in the Everglades National Park in South Florida, United States occurred in the early 1990’s.  Their numbers have been increasing and over three hundred have been spotted. The population has exploded and an accurate estimate is difficult.  Researchers believe that between thirty to three hundred thousand exist today.  The apex predator has become an invasive species with a menacing impact.  Importation of the snakes was banned by the U.S. Department of the Interior in 2012 to combat the spread.

Ball or Royal Pythons (P. regius) are native to Africa.  They are the most common species and marked as least concern on the IUCN Red List.  They reach up to six feet in length and have black or dark brown scales.  Breeders have developed various color morphs.  Rare patterns demand prices in the low thousands.  The most desirable snakes have sold for over a million dollars.