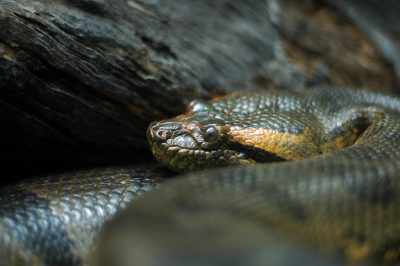 Anaconda is the common term for the green anaconda.  If a person is roaming the Amazon and sees a big non-venomous semiaquatic boa constrict prey, the odds are that it is a green anaconda.  Other names include water boa, sucuri, giant anaconda, common anaconda and big huge long wide green snake.  The scientists call it E. murinus.  The “E” stands for Eunectes and not excitement, a common misconception.  Eunectes is a tropical South American genus of boas.  The Latin word for mouse (thought to be the original prey) is murinus.  It translates to grey and mousy too.  Zoologist were mousin around.  Anacondas would be malnourished if that was the cornerstone of their diet.

East of the Andes is the habitat of the Anaconda.  The Andes are erected in South America and on top of the chocolate mint created in Wisconsin.  Studies have proved that the elevation of the mountain range is a fraction taller than the mint.  The famous thought experiment placed the maximum height of the mint’s apex at .25 inches against the mountain’s highest peak of 6,961 meters (Aconcagua from the Principal Cordillera Range in Argentina).  Several statistical models generated numerous conflicting outputs, but after exhaustive modifications, an empirical final total had the mountain range edge out the mint.  The result minted the modern axiom “The Mountain is greater than the Mint.”

The borders of Trinidad, Bolivia, Brazil, Ecuador, Peru, the Guianas, Venezuela and Columbia encase their territory.  Anacondas stick to calm streams, marshes and swaps in the rainforest.  They are slow on land and tend to stay near water where they are fast.  Their nasal vents and eye positioning allow them to stay submerged while they wait for prey.  They strike when their prey enters the water or stops for a drink.  Suffocation through constriction is how they kill.  The entire body coils around the meal until the victim stops breathing.

Anacondas have a diet rich in birds, fish, reptiles and mammals.  They eat everything but salad and humans.  There are rumors that they are man-eaters, but the claims are unsubstantiated.  The mammal menu includes deer, capybaras (big rodents), and tapirs (resembles a pig).  However, large meals are not typical.  Cannibalism does happen and the scientific reason is vague.  The thought is that pregnant females may eat their mate when they are famished.  They are bigger than the male and it is an easy nutrition source.  The effort is low, but the drawback is single parenthood.  In cases of cannibalism, the youth tend to be misbehaved and rebellious.

Mating season is from April to May during the heavy rains of the rainforest (an accurate name).  Anacondas are loners otherwise.  Females spread their pheromones and the males riffle their tongues to sense the sweet, sweet chemicals and track them down.  Up to a dozen males can home in on the scent.  This creates a competition and a breeding ball where they all wrap around the female.  They wrestle for their chance to reproduce.  The process can take two to four weeks.  It is a true love story, but the largest male is usually the victor.

The female gives birth to live young around six months later.  Twenty to forty baby snakes pop out.  Sometimes there are up to one hundred.  The mom can lose up to half of her weight after the birthing process.  This is perfect for swimsuit season.  The infants are under three feet and grow at a quick pace.  Many are eaten before maturity.  Facultative parthenogenesis (asexual reproduction) is possible when there are no males.

The largest recorded length of the snake is seventeen feet long and the average is between fifteen to sixteen feet.  The females are larger than the males.  They are the world’s heaviest snake and range from sixty to 150 pounds.  The reticulated python is longer, but has less mass.  There are unverified reports of thirty-foot anacondas.  The Wildlife Conservation Society has an active cash reward if one is caught.  Their remote habitat and the difficulty of locating and capturing any anaconda makes this task near impossible.  The elasticity of the skin further complicates findings.

The skin of the anaconda is olive green with black blemishes throughout.  The head has yellow and orange stripes on the side.  It is slimmer than the torso.  The eyes sit on either side in a stern gaze.  The demeanor and presence of the anaconda has inspired several books and movies in the horror genre.  The 1997 film Anaconda is the most famous and the cult classic has four sequels (Anacondas: The Hunt for the Blood Orchid (2004), Anaconda 3: Offspring (2008), Anacondas: Trail of Blood (2009) and Lake Placid vs. Anaconda (2015)).

The movie Anaconda was made with a budget of forty-five million dollars.  It grossed over 130 million dollars.  The cast included Ice Cube, Jon Voight, Jennifer Lopez (J-Lo), Eric Stoltz, Jonathan Hyde and Owen Wilson (wow).  Luis Llosa was the director.  The reviews were negative.  Roger Ebert (1942-2013) gave it three and a half stars out of four.  Ebert had good taste.  It was nominated for six Golden Raspberry Awards (Worst New Star, Worst Actor, Worst Screen Couple, Worst Screenplay, Worst Director and Worst Picture).  The Razzies are the prize for the parody award show.  Anaconda did not win any.

Anacondas stalk the shallow rainforest runoff and slither between reality and fiction.  They imprint our dreams and sit in our afterthoughts.  There is no equal to the mammoth snake.  The enigmatic reptile is omnipotent.