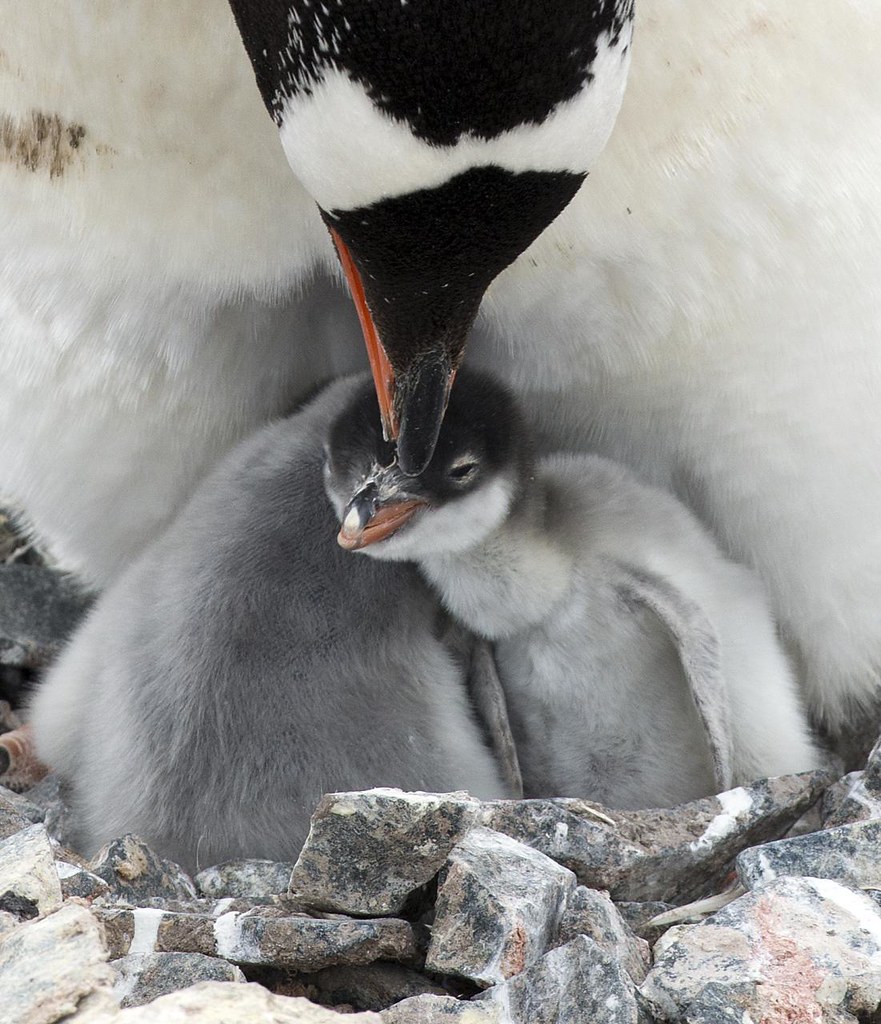 Penguins hate to lose.  Ornithologists refer to them as pengwins.  Those discussions happen around the water cooler.  The water is frozen.  It gets cold in the Antarctic.  The aquatic birds can swim.  Penguins can’t fly.  They are too humble.  The Galápagos penguin lives north of the Equator.  The other species party below.

The wings of a penguin have evolved into flippers.  They are agile underneath the water.  Their plumage is smooth and hosts a layer of air to encourage buoyancy and provide insulation in the cold.  Their wings and tails help them balance in their natural, upright stance.  Duo-chromatic colored patterns shield them from predators.  Their white bellies mask them from the leopard seals and orcas below.  The jet-black camouflage on their back hides them from villains circling above.  One out of fifty thousand penguins are born with brown feathers.  They are called Isabelline penguins and have shorter lifespans.

The quickest underwater bird in the world is the Gentoo penguin.  They are too fast and can propel up to speeds of twenty-two miles per hour when avoiding hunters or securing food.  Most penguins can dive over six hundred feet deep.  Smaller species stick to the surface and go under for a few minutes.  The Emperor penguin can navigate lower than any other bird.  The royal penguins will explore distances up to one thousand eight hundred feet deep.

Penguin eyeballs are adapted for underwater sight.  Scientists speculate that the birds are nearsighted, but there is no conclusive proof.  They have average hearing and make noises to locate family members among crowds.  Waddling and sliding is a penguin’s preferred method of locomotion.  Sliding is called tobogganing.  Their feet are used as propellers to guide themselves in the snow.   They will hop on both feet to cross precarious terrain or when listening to music.

Heat loss is rapid underwater.  Thick feathers keep penguins warm.  Emperor penguins are the largest and have the lightest plume.  Three additional feather types blend with the traditional ones.  Afterfeathers attach to the main feathers.  Plumules are smaller, dense and are bound to the skin.  The filoplumes are under one centimeter and consist of a naked shaft with a spread of fibers.

Penguins can regulate their blood flow to react to the cold.  The thermoregulation allows them to survive.  In the heart of the winter, they huddle together to stay warm.  The birds rotate center positions to give each participant a turn in the warmest spot.  Squid, fish and krill are their main source of protein.  Penguins can drink salt water.  Supraorbital glands filter extra sodium out of their bloodstream.  The rest is passed through their nasal passage in a concentrated fluid.

Where are penguins located?

Antarctica, Angola, Argentina, Australia, Chile, Namibia, New Zealand and South Africa are the most common penguin habitats.  Bergmann’s Rule can be applied.  The largest species live at higher latitudes than their smaller counterparts.  Some fossil records dispute this principal.  Variations in the size of ocean currents is the accepted counter explanation.  No penguins are located in the Arctic.

Penguins breed in various sized colonies.  The range is between one hundred to one thousand pairs.  The large grouping has yielded a diverse and entertaining social structure.  Vocal and visual displays of comfort and anger are common.  The birds are monogamous during breeding season.  Couple swapping may happen afterwards.  Most penguins lay two eggs once a year.  King penguins lay one.  The male and female take turns incubating the eggs.  The exception is the Emperor penguin.  The males tend to the eggs alone.

The eggs are the smallest when proportionally compared to their mothers’ weight.  They are bout two ounces or under five percent of the mama bird.  The egg shells are thick to avoid dehydration and brave the harsh environment.  The yolk is viscous for the same purpose.  When an egg doesn’t survive, a penguin will try to steal another.  Attempts usually fail.  Mini penguins hang out in crèches or groups after they are born.

Land predators do not exist.  Sled dogs used to be an issue, but have been banned.  The lack of out of water adversaries has led to an amicable relationship with humans.  The birds have no fear around them.  They keep a short distance out of caution.  In the summer of 2011, an Emperor penguin washed up on the shores of New Zealand and was named Happy Feet.  The bird was treated and released.  The media sensation that followed was the inspiration for the animated film Happy Feet (2006).