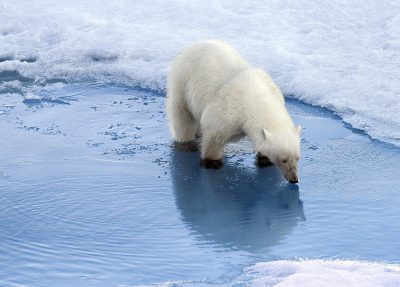 Polar Bears live throughout the Arctic Circle in the North Pole.  The South Pole is the Antarctic Circle and penguins live there.  It’s a shame because they indubitably would form a strong friendship if their habitats weren’t polar opposites.  Santa Claus is a neighbor of the Polar Bear, but he is a workaholic.  Not to be confused with the popular Comedy Central sitcom Workaholics about a triumvirate of telemarketing slackers.  The show had a seven-season run and starred Anders Holm, Adam DeVine and Blake Anderson.  The star of this show has the binomial name Ursus maritimus and weighs 700-1500+ pounds if it’s a male.  It is impolite to ask a female Polar Bear how much she weighs, but if she did step on a scale it would shatter.  That’s because she is a bear and the scale was engineered for humans!  She would have you know that while her weight is her closest kept secret, it is about half as much as papa bear.

The male polar bear measures between 7 feet 10 inches and 9 feet 10 inches.  The female is 5 feet 11 inches – 7 feet 10 inches.  They have longer bodies, noses and skulls than their closest relative, the brown bear.  Large feet help polar bears swim and distribute their weight while they roam across their ice and snow filled habitat. Their paws are littered with small dermal bumps that offer traction.  Short claws secure large prey against the ice.  Forty-two sharp teeth masticate and separate the bear’s meal into delicious and articulate morsels.  They can swim six miles per hour and sprint up to twenty-five.

Polar bears have fashionable and thick white fur coats.  Their fur can turn yellow with time.  This lowers the resale value of the fur, but the wisdom gained with age is priceless.  Warmer temperatures in captive environments may tinge the fur green.  This is a result of algae growth inside the transparent guard hairs that ensconce the underfur that sits on top of four inches of adipose (body fat) tissue.  The guard hair is anywhere from two to six inches long.

A developed sense of smell can detect seals up to one mile away and buried under three feet of snow.  Seals are the main dish of the polar bear’s carnivorous diet.  Bearded and ringed seals are their favorite.  Seal is their favorite musician too (It is debatable, but hard to argue against the artist responsible for the 1996 Grammy Award winning Best Male Pop Vocal Performance, Song of the Year and Record of the Year: “Kiss from a Rose”).  The seals are vulnerable when they surface to breath and rest on the ice.  It is difficult to nab them in the open water.  The polar bear uses their prodigious nose to find the seal’s breathing hole in the ice.  They lay low until the seal comes up for that sweet, sweet oxygen and when they smell the exhale of the seal…the bear strikes (the circle of life).  Resting seals may can become dinner if they let a polar bear get too close.  Some friendly advice we have four our seal readers: “Do not let Polar Bears get too close.”

Adult bears subsist on the skin and blubber of the seal.  It is dense with calories and easy to digest.  The young polar bears eat the red meat and sometimes scavenge remains.  The bigger males can hunt walruses, beluga whales and narwhals.  Fourhorn sculpin and Arctic char fish are targets if they hunt underwater.  Bird eggs, chicks, crabs, plants and berries are consumed on rare occasions.  Everything is washed down with an ice-cold Coca-Cola.  Alright…fine, only animated polar bears have the privilege.  If the soda supply chain reached the Arctic, it is possible polar bears could get their paws on an Always Cool Coca-Cola.  The first polar bear Coca-Cola advertisement appeared in French print circa 1922.  The modern version was released in 1993 in the “Northern Lights” television commercial.

Polar bears do not hibernate and can go without food for several months.  They live off fat reserves when ice is unavailable for hunting seals.  Pregnant females are the exception.  Males follow the tracks of potential mates for sixty miles or longer.  They fight with each other to win over the female.  Both participants leave with scaring and one leaves with a lover.  The new couple mates for an entire week, inducing ovulation.  The female eats enough food to double her body weight.  She eliminates alcohol from her diet and if she is a smoker, she drops that too.  A maternity den is created and the female polar bear goes into a dormant state.  Her heart rate slows and her body temperature remains normal.

The cubs are born blind.  The average litter consists of two cubs and they weigh around two pounds.  Mom provides milk for the first months until they are 20-30 pounds.  They leave the den for a few weeks and proceed to make the journey to the sea ice to hunt seals.  Female cubs mature by their fifth year and the males by their six.  Polar bears have a life expectancy of twenty-five years.  The harsh climate of the Arctic makes hunting difficult with age and death from starvation is commonplace.

There are an estimated 20-30 thousand polar bears worldwide.  Nineteen subpopulations are recognized.  Here they are.

The IUCN (International Union for Conservation of Nature) has polar bears listed as Vulnerable (VU).  Climate and pollution change and environmental stress generated by the oil and gas industry are the main contributing factors.  They are marine mammals and the apex predator of their habitat.  Their scientific name means “maritime bear” and their fur is white.  If you happen to be looking at a picture of random bears and forget which bear is which, remember that the one with the white fur is the polar bear.