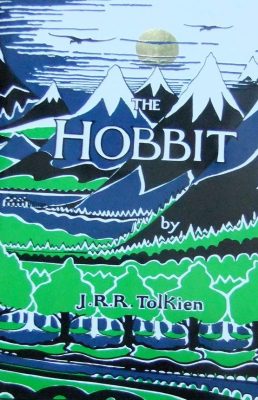 The Hobbit was written by J.R.R. Tolkien.  The full title is The Hobbit, or There and Back Again.  It was published in 1937 by George Allen & Unwin.  It is the prequel to The Lord of the Rings.  The story follows Bilbo Baggins and takes the readers on an adventure through Middle-earth.  Several adaptations have aired throughout the years, including a set of films directed by Peter Jackson.

Hobbits live quiet lives in The Shire.  Their homes are built into the ground.  Bilbo Baggins resides in a piece of upscale real estate called Bag End.  He enjoys a tranquil existence in luxury.  The story begins with Bilbo puffing on a pipe and soaking up nature.  A wizard named Gandalf appears.  Wizzy “G” asks the hobbit if he wants to go on an adventure.  Bilbo declines.

The next day the doorbell at Bag End rings.  Bilbo opens his circular door and Dwalin the dwarf walks in.  Many more dwarves arrive.  Gandalf shows up with Thorin, the dwarf leader.  There are thirteen dwarves total and the wizard.  Bilbo is overwhelmed and confused when he discovers he has been volunteered as the group’s burglar.  Gandalf spreads out a map and talks about a secret entrance in a mountain.  Thorin adds more context about treasure and dragons.  Everyone goes to bed.  Bilbo is restless.

Bag End is empty when the hobbit wakes up.  He is thankful.  Gandalf materializes and takes him to the Green Dragon Inn to begin their trek to the Lonely Mountain.  He is unthankful.  The gang pushes on and nightfall sets in.  They discover a fire.  Bilbo is sent out on a scouting mission.  He finds a trio of trolls hanging out.  The trolls capture him and argue with each other.  The dwarves creep over and are captured too.  Baggins is forgotten.

The trolls debate how they want to cook the dwarves.  Gandalf starts an argument by mimicking their voices.  The three go at each other until daybreak.  The sunlight turns them to stone.  Bilbo and the wizard release their friends  They all take weapons out of the troll’s cave and head over to the elf city Rivendell.  Elrond greets them.  He is the man in charge and full of information.  Elrond translates the markings on their new weapons and the secret writing on the map.  The cavalcade rests.

The caravan moves to the Misty Mountains.  They travel on a solid pass, but a tempest rolls in.  Everyone takes cover in a cave.  A camp is built and they go to bed.  Bilbo wakes up and notices their ponies disappearing through a crack in the wall.  He screams and a bunch of goblins tie everyone up.  Gandalf is able to escape.  The goblins take them to see the Great Goblin.  He does not like dwarves and tries to eat Thorin.  The wizard launches a surprise attack and kills the head goblin.  Gandalf leads his friends deep into the mountain to safety.  Bilbo gets separated and knocked out.

Baggins wakes up in total darkness.  He finds a ring on the floor and pockets it.  Bilbo is lost and continues on.  An underground lake cuts off his path.  A creature named Gollum is resting at the lake.  Gollum challenges Bilbo to a game of riddles.  If he loses, he will show the hobbit out.  If he wins, he will eat him.  The stakes are high and Bilbo doesn’t want to become a hobbit-steak, so he is careful not to make a mistake.  Bilbo wins, but Gollum is dishonest and approaches for the kill.  Bilbo accidently puts on the ring and vanishes.  He is able to break out of the mountain using his invisibility.

Little “B” catches up with the group.  He does not tell them about his new jewelry.  Everyone heads north.  Wolves appear and they climb up a set of trees for cover.  The wolves are called wargs and they are buddies with the goblins.  The goblins show up and taunt the good guys up in the trees.  The situation is dire and they are outnumbered.  A flock of giant eagles swoop in.  The big birds pluck the gang out of the trees and fly them to safety.  Everyone rests and thanks the eagles for the assist.

Gandalf takes his companions to Beorn’s house.  He is an amalgam of a bear and a man.  Beorn entertains his guests and gives them supplies.  The party discusses their options and what route to take.  They settle on the northern path that winds through the Mirkwood forest.  The wizard cautions them about the dangers of Mirkwood and departs.  The hobbit and the dwarves enter the forest alone.

Mirkwood is dark and confusing.  Days pass and the party becomes fatigued.  The air is stiff and danger is everywhere.  Mysterious eyes watch them from the trees.  One of the dwarves falls into a stream that puts him to sleep.  The others carry him and tensions rise.  Progress is slow, but they manage to stick to the safety of the path.  Lights flicker in the distance and they leave the path.  The group disperses and the ranks split.  Bilbo is alone and goes to sleep.

The hobbit wakes up in a spider’s web.  He uses his sword to free himself and kills the spider.  Bilbo finds the others poisoned and bound in webs.  He puts on the ring and leads the spider posse away from his boys.  He sneaks back and frees the dwarves.  Everyone runs and the spiders return.  They are chased into a clearing and the spiders leave.  The area is under the control of the wood elves.  The gang is captured, blindfolded and taken prisoner.  Bilbo is not because of the ring.  He decides that he is not a fan of Mirkwood and follows the elves.

Thorin is interrogated and invisible Bilbo prowls around the dungeon.  He plots an escape and steals a guard’s keys.  The keys unlock the cell doors and free the dwarves.  They all jump into empty barrels and escape through a trapdoor that opens up into a river.  The water leads to the human occupied Lake-town.  Everyone gets out of the barrels and trudges towards the town hall.

Thorin proclaims that his lineage makes him the master of the town.  The humans agree and are relieved.  The dragon Smaug has cast a shadow on the town from the Lonely Mountain.  Lake-town is at the foot of the mountain and thrilled to be lifted from their affliction.  The compatriots obtain provisions and approach their goal.  The earth is scorched at the base of the foothills.  The main entrance is under the dragon’s guard.  The secret gate is their sole option.

Bilbo finds a slim passage that takes them to an opening on the side of the mountain.  Nobody can recall how to open the hidden door.  The dwarves attempt to pry it open with force.  They fail and Baggins thinks.  Time passes and he remembers the riddle on the map.  The party gathers and a ray of sunlight falls on the door.  A keyhole appears and Thorin inserts his key.  The door opens and a cold corridor greets them.

The burglar slips on the ring and creeps into the dark passage.  He finds a sleeping dragon and the treasure.  Bilbo is afraid and steals a golden cup.  He heads out and shows it to the dwarves.  Smaug notices the theft and gets mad.  He does dragon things and eats their ponies.  The rampage ends and he goes back to sleep.  The hobbit goes back down the passage and the dragon awakes.

The odd couple share words and Bilbo notices a weak spot on the belly of the dragon’s jewel encrusted scales.  Smaug shoots flames in anger and Baggins runs back up to the dwarves.  He gives them an update and the dragon flies to Lake-town.  The good guys enter the mountain and reclaim their treasure.  Bilbo finds the Arkenstone and keeps it to himself.  The Arkenstone is the most valuable gem in Middle-earth and what Thorin is after.  The burglar is all grown up.

The group takes advantage of the dragon’s departure and settle into their former home.  Smaug is causing a ruckus below.  Lake-town is on fire and the human’s arrows are having no effect.  The people are evacuating and the captain of the archers is their last hope.  His name is Bard and a bird delivers him a message.  The bird tweet-tweets that the dragon has a weak spot.  Bard thanks him and fires his last arrow at the spot.  The shot finds the mark and Smaug dies.  The town is destroyed.

Word of the Dragon’s death circulates the land.  Middle-earth loves gossip and in particular, a comeback story.  A raven tells the dwarves and Bilbo about Smaug.  They are elated, but the bird squawks about a caveat.  Humans and elves are marching towards their mountain.  Everyone wants a piece of the treasure.  Thorin and his crew fortify the gates and the intruders arrive.  Their demands are simple.  They want some of that sweet, sweet treasure.  Thorin claims it’s their birthright and the gates are besieged.

The armies outside build up their forces.  Thorin continues his search for the Arkenstone.  Bilbo senses an opportunity and sneaks outside to the enemy’s leaders.  He does not want to see any bloodshed and offers them the Arkenstone as a bargaining chip.  They take it and thank the hobbit.  He runs into Gandalf on his way back to the dwarves.  The wizard commends him for his actions.

Bard and Gandalf approach the dwarves.  They reveal the Arkenstone.  Thorin is outraged and moves towards Bilbo.  The burglar pleads his case and explains that the stone should be considered his part of the treasure and he should be free to do whatever he wants with it.  Thorin is disgusted, but honors the contract.  He agrees to give the humans and elves one fourteenth of the treasure for the Arkenstone.  All parties are satisfied.

Darkness rolls in and the wargs and goblins with it.  The elves, humans and dwarves unify against their common opponent.  The Battle of the Five Armies begins.  Chaos and bloodshed stain the mountain.  Evil starts to gain an advantage.  The giant eagles make a second appearance and shift the odds.  Vegas goes nuts and the over and under spirals in the other direction.  Bilbo gets knocked out in the bedlam.

He awakens and has a headache.  What happens in the Lonely Mountain, stays in the Lonely Mountain.  Gandalf greets him and they revel in their victory.  It is short lived when Bilbo discovers that Thorin is fatally wounded.  The two make amends and Thorin dies.  Beorn (who joined the fight), Gandalf and Bilbo start the journey home.  They make a pit-stop at Beorn’s for the winter and visit Elrond on the last leg of the excursion.  Bilbo is a pariah back home, but it is a small price to pay for the adventure of a lifetime.

9 comments on “The Hobbit”