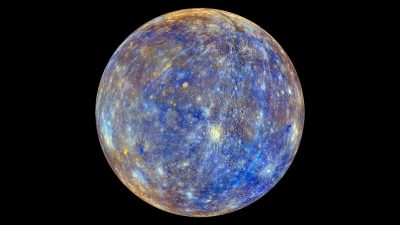 Mercury is the Roman God of luck, trickery, thieves, merchants, travelers, communication, messages, expression, commerce and financial gain.  He guides souls to the underworld too.  Daniel Gabriel Fahrenheit invented a thermometer filled with mercury.  He did this in Amsterdam during 1714.  Fish sometimes concentrate mercury in the form of methylmercury.  This can pass into humans.  The smallest planet in the Solar System and the one closest to the Sun is… Mercury.

Mercury, like Earth, is a terrestrial planet (made of rock).  The inner core is dense with a liquid layering.  The crust is a compact silicate and the mantle covers an iron sulfide outer core layer.  The radius is around 1,500 miles.  It is smaller than some of the natural satellites in the Solar System (Tian and Ganymede).  He is a condensed, but petite boy.  Thirty percent is silicate material and the remaining seventy is metallic.  The planet’s density is 5.427 g/cm3.  Earth is the only planet that is denser (5.515 g/cm3).  Gravitational compression is the reason.  If it was removed, Mercury would be the heaviest.

The surface of Mercury is made up of narrow ridges that extend for miles.  Scientists believe this is from the mantle and core cooling after the crust solidified.  The core dominates fifty-five percent of its volume.  Earth’s encompasses seventeen percent.  Little “M” has a crust that is over twenty miles thick and its core contains more iron than any other in the Solar System.

Mariner 10 was the first spacecraft to fly over Mercury between 1974 – 1975.  The data captured showed that the topography was similar to the Moon.  Extensive cratering was sprinkled throughout the landscape.  They appeared in all states of decay.  Some are fresh and others are ancient.  The largest is called Caloris Basin.  Its diameter is 963.1 miles wide.  The impact was so impactful that lava erupted and left a ring over 1.2 miles around the crater.  Fifteen other basins have been discovered, including the Tolstoj Basin (310.7 mi) and the Beethoven Basin (388.4 mi).  Micrometeorite collisions and solar wind has caused bruising too.

Rolling hill-filled plains coat the regions between the carters of Mercury.  Flat, smooth plains cover the rest.   They are most prominent around the Caloris Basin.  Volcanic characteristics are not present, but their lobate shape supports the theory that they were at some point.  They formed after Caloris and have a different density than its basin floor.  The plains are littered with deformity and corrupted ridges that are associated with thrust faults (older rocks that push through the crust above younger rocks).  This is abnormal for a planet.   They are under fifty million years old and a sign that exterior geological activity continues today.

MESSENGER was the second NASA spacecraft to swoop past Mercury in 2008.  It put a probe into the planet’s orbit in 2011 and again in 2013.  This yielded a complete orbital image map and provided evidence of volcanic activity.  Fifty-one pyroclastic flows were plotted.  The majority (90%) were found inside impact craters.  Caloris Basin supports almost ten intersecting volcanic vents in its southwest rim.  They make up a compound volcano (two or more cones) and are thought to be over a billion years old.

There is no atmosphere on Mercury.  This causes extreme temperature fluctuations between -280 to 800 degrees Fahrenheit.  Perihelion is when the planet orbits closet to the Sun.  Temperatures climb to 800 °F during this period.  They drop to 400 °F during aphelion (orbit is furthest from the Sun).  The dark side of Mercury averages temperatures of -262 degrees Fahrenheit.  Temperatures in the day are very strong, but observation suggests that ice exists on the floor of the craters.  The origin is unknown.  Comet deposit is one theory.

A dipolar (two poles) magnetic field is found on the planet.  It is one percent the strength of Earth’s and stable.  The field is strong enough to dispel solar wind and trap its plasma.  This forms a magnetosphere and is a cause for Mercury’s space weathering.  The magnetosphere is tenuous and leaks energy, such as magnetic tornadoes.  This creates small openings where the solar wind can push through and cause planetary erosion.

An orbit is completed after 88 Earth days.  Mercury does this in an eccentric fashion.  Orbital eccentricity measures the level the planet’s orbit deviates from a perfect circle.  Mercury’s eccentricity is 0.21 and the most obscure in the Solar System.  A single solar day (24 hours) lasts two Mercury years (176 days on Earth).  Temperature and a three to two spin-orbit resonance are the root causes.  The axial tilt (obliquity) is from zero to .027 degrees.  Jupiter has the second smallest tilt at 3.1 degrees.  The sun is more than sixty-six percent visible over the horizon before it sets in a single Mercurian day.  Rotation would appear to move in a retrograde direction in theoretical surveillance.

Mercury can be seen during a solar eclipse.  Its visibility from Earth shifts in phases like the Moon.  The new phase is seen during inferior conjunction (direct line between the Sun and Earth) and the full is viewed at superior conjunction (Sun in-between the Earth and the planet).  It is invisible throughout both stages and brightest during its full phase.  Higher latitudes make it more difficult to observe.  Mercury spotting is best in the subtropics and tropics and can be seen in daylight.  The Hubble Space Telescope is not allowed to watch.  There are safety precautions in place that inhibit it from facing too close to the Sun.  Astronomers said no peeking.

The first recorded sightings were made by an Assyrian astronomer sometime in the 14th century BC.  Babylonians named it Nabu.  Ancient China called it the Hour Star.  The Roman and permanent designation was Mercury, after one of their Gods.  Mercury was a messenger god and the planet is the fastest in the Solar System.  Galileo was the first to get a look under a telescopic (17th century).

There is no hard scientific evidence that support life on Mercury, but recent studies have considered the possibility.  Lifeforms represented by microorganisms could have existed during an unknown time period on the planet.  This would make it habitable, but your guess is as good as theirs.  Everything is possible under a microscope.