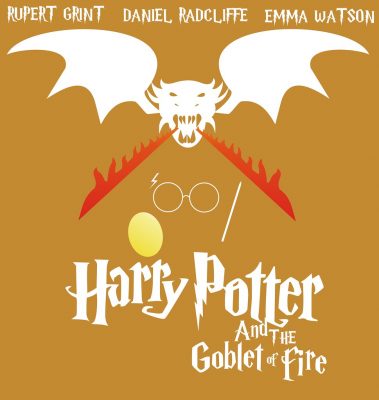 Harry Potter and the Goblet of Fire is the fourth book in J.K. Rowling’s magical saga.  It was released on 7/8/2000 in the United States and the United Kingdom.  The book won a Hugo Award the following year.  It is the only novel in the series to do so.  The award is presented to the best fantasy or science fiction story (40,000 or more words) that was published in the previous year.  The fourth time was the charm for Rowling.  The Riddle House is where the story begins.

The Riddle family was murdered over a half a century ago.  The main suspect was their gardener Frank Bryce, but he was proven innocent and there were no signs of bodily harm on the victims.  In the present, Frankie B notices a light inside the Riddle House and decides to investigate.  A large snake appears and Lord Voldemort kills Mr. B with a wand flick and some green light.  Rest in peace Mr. Bryce.  Harry was not able to rest.

His scar caused immense pain in his dark room at the Dursleys.  He panicked.  The last time his scar did this, Lord Voldemort was near.  What can a fourteen-year-old wizard do?  Write his godfather of course.  Not Marlon Brando from The Godfather (1972), but Sirius Black.  Harry attends breakfast and receives a letter of his own.  He is invited to the Quidditch World Cup.  He packs his trunk and heads to his best friend Ron’s house through his fire place by using Floo Powder.

The Weasley’s home is called The Burrow.  Harry enjoys a magical filled evening and goes to bed pain free.  The morning arrives and the residents depart.  They meet up with The Diggory family.  They locate an old boot (Portkey) on top of a hill and it transports them to the World Cup.  The grounds are expansive and filled with idiosyncrasies of the wizarding world.  Harry runs into Barty Crouch’s house-elf Winky.

The quidditch match is close and Ireland edges out Bulgaria (170 to 160).  Everyone is in high spirits back at camp.  Sometime in the night a large, green and smoke-filled skull appears in the sky (the Dark Mark).  A snake writhes in the skull’s mouth.  Screams and Death Eaters (Voldemort supporters) invade from every direction. Young Potter’s wand is missing.  Winky is found unconscious with Harry’s wand.  His wand was the source of the Dark Mark.  Winky is blamed, but neither of them could have created the mark.  The whole episode was a dark mark on the otherwise wonderful sporting event.

The following day, the children head out in the rain to the Hogwarts Express.  They arrive at the castle and file into the Great Hall for the welcome dinner.  Dumbledore greets the students and proclaims that the new Defense Against the Dark Arts teacher is Mad-Eye Moody.  His real name is Alastor and he used to be a famous Auror (evil wizard policeman).  Professor D continues and announces the resurgence of the Triwizard Tournament.  The TT is a competition between the three prominent European schools of magic (Durmstrang, Beauxbatons and Hogwarts).  Hogwarts is the host and the winner gets a thousand galleons.  You have to be seventeen years or older to enter.  The Goblet of Fire selects one champion from each school.  A student can enter their name by writing it on a piece of parchment and casting it into the fire.  Harry is too young to enter.

Rita Skeeter writes several hit pieces about Harry for The Daily Prophet.  The Goblet of Fire decides the participants.  Cedric Diggory (Hogwarts), Fleur Delacour (Beauxbatons) and Viktor Krum (Drumstrang) are named.  Harry is announced too and forced to compete.  This upsets the non-Hogwarts schools, but the Goblet has spoken and the show must go on.  The students are ushered into a room where a few arguments take place and the rules are announced.  They will compete in three unknown and challenging tasks that will start in November.

Harry learns that the first task involves dragons.  He is perplexed and Hermione helps him plan.  They decide on a summoning charm that will fetch his broomstick.  The kids learn that the objective of the dragon challenge is to retrieve a protected golden egg.  Harry snatches his egg with ease.  The clue for the second task is inside the egg.

Rita keeps publishing anti-Potter gossip articles.  Harry cannot make any progress with his egg.  Whenever he opens it, it starts to shriek.  Cedric tells him to take a bath with it.  He sneaks into the prefects’ luxurious tub and Moaning Myrtle tells him to listen to it underwater.  A song tells him to recover something he has lost.  He figures the second challenge will involve the Merpeople in the school’s lake.  He can’t figure out how he is going to hold his breath.  Harry is not a fish.

Dobby serves as the deus ex machina and gives Harry Gillyweed on the morning of the second task.  The user cannot smoke Gillyweed, but if it is ingested, the user grows fins and flippers and can breathe underwater.  Harry uses it to save Ron from the bottom of the lake.  He saves Fleur’s sister too.  This heroic act lands him top marks.

The final task is a giant hedge labyrinth.  A trophy is hidden in the center.  The winner is the student who finds it first.  The participants enter the maze based on their current placings.  Cedric and Harry go in first and are followed by Krum and Fleur.  Krum curses Cedric and Harry saves him by stunning Krum.  The Hogwarts pair trudge onwards and reach the cup.  They decide to tie and touch it at the same time.  The trophy is a Portkey and they warp into a graveyard.

Wormtail kills Cedric and restores Voldemort’s body with Harry’s blood and his own right hand.  Voldemort summons the Death Eaters by touching Wormtail’s tattoo.  He restores his servant’s missing hand and challenges Harry to a duel. Their spells clash and apparitions of Cedric and Harry’s parents appear.  The confusion allows Harry to grab the cup and Cedric’s body and he teleports back to Hogwarts.  Moddy takes Harry to his office and unveils himself as the main villain.  He was the one that entered Harry into the tournament and made sure that he ended up in the graveyard.

Mad-Eye moves in for the kill and Harry is saved by Snape, Dumbledore and McGonagall.  They subdue Moody and learn that he was an imposter.  Barty Crouch Jr. used Polyjuice Potion as a form of deception.  He gets a Dementor’s smooch and is unable to testify.  Dumbledore breaks down the post Voldemort statistics with Harry and he learns that both of their wands share a common core (a feather from Fawkes).  The duplicity of their wands is what caused the apparitions that allowed Harry to escape.

Dumbledore decides to plot against Voldemort’s return.  Harry decides to give his prize money to Fred and George so they can open up a joke shop.  The story of The Goblet of Fire was another successful victory for Harry and a success for J.K. Rowling.  What does she have planned for Harry’s fifth adventure?

3 comments on “Harry Potter and the Goblet of Fire”