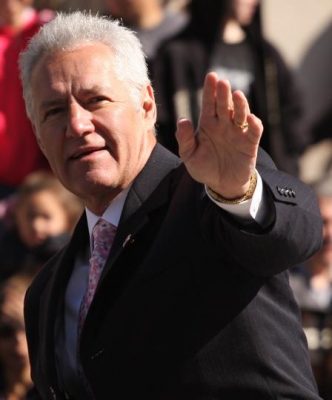 Alex Trebek was born on July 22, 1940 in Sudbury, Ontario, Canada.  He passed away on November 8, 2020 in Los Angeles.  His full name was George Alexander Trebek.  His father was George Edward Trebek and a chef.  Alex was raised in a bilingual (French/English) home.  Sudbury Secondary School was were he attended high school.  He went to college at the University of Ottawa.  Trebek obtained a philosophy degree in 1961, but his main interest was broadcasting.

He worked at the CBC (Canadian Broadcasting Corporation) in 1961 during the nights of his final year at university.  Alex read the national news over the radio and covered a plethora of special events on CBC Television and CBC Radio.  His first job as a television host was for the Canadian music series Music Hop (1963-1964).  From 1966-1973 he hosted Reach for the Top.  Reach was an academic quiz show for Canadian high school students.  He presented a weekly skating show and classical musical performances (1967 to 1970) for the CBC.  Trebek hosted the CBC Toronto morning radio show I’m Here Til 9 after a year of hosting Strategy, an afternoon game show.

Alex Trebek was hired by NBC and moved south to the United States in 1973.  The Wizard of Odds was his first hosting assignment.  He was promoted to the popular game show High Rollers from 1974-1976.  Alex worked on CBS’s Double Dare (1976-1977) before High Rollers was rebooted from 1978 to 1980.  He was on the second season of The $128,000 Question.  The episodes were recorded in Toronto in 1977.  Trebek was one of two hosts to have a show in the United States and Canada during this time.  The other was Jim Perry (Card Sharks, Headline Hunters and Definition).  Alex was a guest on Card Sharks in 1980.  He won the round-robin celebrity tournament for charity.

Battlestars (NBC) was his home in 1981.  It was cancelled in 1982 after six months of air time.  He worked on Pitfall before the production company went bankrupt (Catalena).  Alex rebounded with The New Battlestars, but it lasted three short months.  Art Fleming declined to work on the remake of Jeopardy!.  Alex accepted the position in 1984.  The show was a massive success and his opus.

Jeopardy! has an exclamation point in the tittle.  That signifies excitement!  The show has plenty of it.  It has three contestants.  The winner of the previous show returns and is on the far-left side from the viewers perspective.  The guests compete by answering general knowledge quiz questions.  There are three rounds (Jeopardy!,  Double Jeopardy! and Final Jeopardy!).  Tons of punctuation and lots of fun.

The clues to the show are revealed as answers and the contestants respond in the form of a question.  The paradox has immortalized the show (along with Trebek’s acerbic wit).  The first two rounds have five clues under six categories.  The dollar value increases with the difficulty.  The guests buzz in to give their answer.  It is first come, first serve.  If they answer correct, the value is added to their total score and they get to choose another.  If they fail to answer in five seconds or get the question wrong, the value is deducted from their score.  Mispronunciation is not accepted.

The show’s ethos encourages the contests to request answers from lowest to highest value.  Each question exponentially builds upon the category’s narrative.  Some players disrupt the traditional flow in order to gain a competitive advantage.  This method has varying levels of success.  A Daily Double is randomized behind an answer once in the Jeopardy! round and twice in Double Jeopardy!.  It allows the selector to wager five dollars up to their maximum score.  If they get it right, they add the wager to their score.  If they fail…they subtract it from their total.

Final Jeopardy! is comprised of one question.  The players learn the final category of the question before a commercial break.  Partitions are set between them and they make a wager.  Any amount of their total can be gambled, except for a few forbidden values (ones with negative connotations).  The break ends and the clue is given.  The contestants are allowed thirty seconds to write down their answer.  The host reads their responses in ascending order from last place to the current leader.  Final scores are tallied and a winner is declared.

The University of Ottawa granted Alex an honorary degree (Doctor of the University).  Fordham University did too.  He earned two Walk of Fame stars.  One on Canada’s Walk of Fame in Toronto and one on Hollywood Boulevard (Los Angeles) at the Hollywood Walk of Fame.  He won the Daytime Emmy Award for Outstanding Game Show Host seven times (1989, 1990, 2003, 2006, 2008, 2019, 2020).  At the 38th Annual Daytime Entertainment Emmy Awards (Las Vegas), Alex won the Lifetime Achievement Award.  The Royal Canadian Geographical Society bestowed a gold medal (2009) on Trebek for his contribution to education in the field of geography.  He was the Honorary President for the society in 2016.  In the same year, the City of Ottawa gave Alex the Key to the City.  He received the title of Officer of the Order of Canada in 2017 by the Governor General David Johnston.  The 2019 Americanism Award was given to Trebek by the Daughters of the American Revolution.

Alex Trebek married twice.  He tied the knot with Elaine Callei in 1974.  They divorced in 1981.  Jean Currivan and Trebek recited their marriage vows in 1990 and had two kids (Matthew and Emily).  Alex was diagnosed with stage IV cancer in early 2019.  The disease was in his pancreas.  He received treatment and fought the predicament for a year.  His odds were under 20% to make it to 2020 and he overcame them.  Alex lost his battle on November 8, 2020 at the age of 80.  He is enshrined in pop culture and left society with countless positive memories.