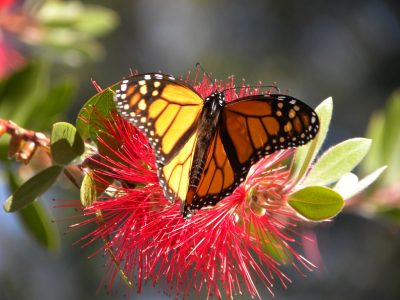 The monarch butterfly is the most recognized butterfly in North America.  It is referred to as monarch and is a milkweed butterfly from the Nymphalidae family.  The Nymphalidae is not a crime syndicate.  It is the largest family of butterflies with over six thousand species.  Common tiger, black veined brown, wanderer and milkweed are other pseudonyms for the floaty protagonist and sovereign ruler (monarch).  It is a great pollinator for its kingdom of plants.

Monarch butterflies have a wingspan that stretches about 9 to 10 centimeters (up to four inches).  The upper parts are orange and outlined with black veins.  The borders are black with white spots and the tips have orange ones.  The undersides are lighter.  The flight patterns of the monarch are quite slow.  They reach a speed near nine km/h (5.5 mph).  A casual human jog is over six mph.  If you find yourself under a monarch attack, a brisk pace will propel you to safety.  Remember not to pause or they can quickly flutter to close the distance.  They do not have imposable thumbs.  If you can open a door and close it before they land, you are in the clear.

Males are larger than female monarchs.  Their wings are heavier and wider.  The hindwings have a spotted black patch.  Female wings are thicker.  This characteristic protects them during migration.  The dimensions of the thorax are similar for both genders.  Monarchs have the traditional six legs of insects.  They only use the middle and hind ones.  Adult butterflies are sexually dimorphic like an anaconda.

Carl Linnaeus added monarchs into the genus Papilio (swallowtail butterfly family) in his 1758 book Systema Nature.  Jan Krzysztof Kluk transplanted them into a new genus called Danaus.  William III of England was known as William of Orange (Prince of Orange).  He was a monarch that reigned from 1689 to 1702.  He died of pneumonia due to complications from a broken collarbone caused by a horse-riding accident.  The primary orange coloring of the butterfly, combined with the memory of William III is the reason for the butterfly’s name monarch.  William’s title had Orange in it and the butterfly has orange wings and William was a monarch, so the orange butterfly is similar to the departed monarch and now they share a name.  William butterfly was the other option, but there are female butterflies too and that would not be fair to them and could cause mass confusion during classroom roll call.  If there were multiple monarchs in class, way too many wings would be raised (“Is William present?”) and being a butterfly teacher is taxing.  Now on to taxonomy.

The scientific name is Danaus plexippus (D. plexippus).  Plexippus is a name found in Greek mythology and translates to “one who urges on horses” or “charioteer”, a rider.  Danaus is the male version of Danaë.  She was an Argive princess and the mother of Perseus (Zeus was the father).  She founded the city of Ardea in Latium and Zeus showered her with gold.  Combine this into a Greek cocktail and you get a Monarch butterfly.  The golden rider.  Scientists have tried to speak Greek with them to no avail.  English didn’t work either.  Monarch sign language is still in development, but trials look promising.  Placing your hands in an akimbo stance and flapping like a chicken is the sign for hello.

There are four stages in the metamorphosis process.  Monarchs start as eggs.  They are laid on the bottom of milkweed plants in the spring and summer.  They are about a millimeter in size and light green colored.  A female can lay between three hundred and a thousand eggs.  The larger the female, the larger the batch of eggs.  The eggs hatch within a week into caterpillars (larvae).

The caterpillar progresses through five stages of growth.  It molts between each one.  The stage is called an instar (period between two successive molts).  The larva eats the egg casing and milkweed leaf in the first instar.  It grows up to six millimeters.  A pattern of yellow, black and white form in the second.  The abdomen and thorax grow tentacles.  The caterpillar starts to feast on the center of the milkweed and reaches one centimeter in length.  In the third instar, the tentacles increase.  Our hero eats along the edges of the leaf and becomes 1.5 centimeters long.  It extends to two and a half centimeters in the fourth.  White spots form.  A hungry larva emerges in the fifth stage.  A whole leaf can be consumed.  Its length extends up to 4.5 cm.  Two phases down.  Two to go.

The crowd favorite is the third phase.  This introduces the pupa and chrysalis.  A silk pad is spun and the larva attaches to it.  It hangs upside down for 12 hours and enters peristalsis and the skin splits.  The skin is shed and a green chrysalis is formed.  It turns opaque.  A day passes and the monarch forms inside.  A few days more go by and the chrysalis becomes blue and then transparent with bright colors of orange and black.  The monarch sprouts two weeks later.  It hangs upside down until the wings dry.  It flies into the world as an adult.  They live for two to six weeks.  A monarch is here for a good time…not a long time.

“Float like a butterfly, sting like a bee. The hands can’t hit what the eyes can’t see.”