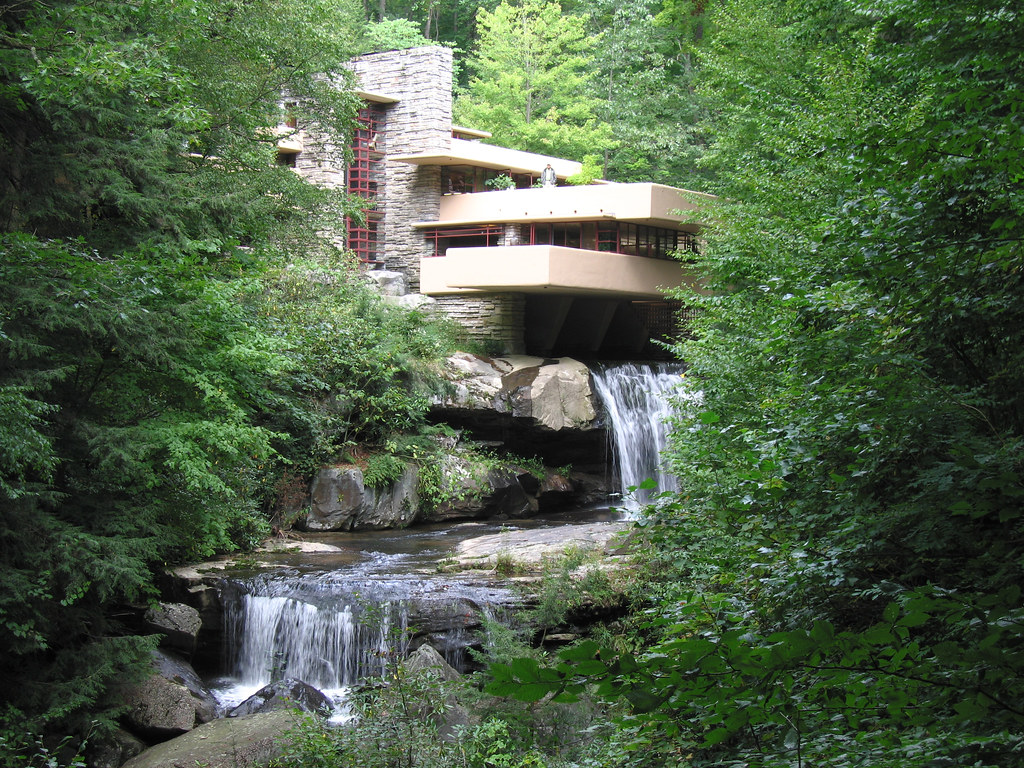 Frank Lloyd Wright was a designer, writer and architect.  He was born in Richland Center, Wisconsin on June 8, 1867.  Over one thousand structures were erected over a seventy-year period.  His accomplishments advanced the architectural movements of the twentieth century and influenced a generation of engineers and architects around the world.

Papa William Cary Wright was a musician and a published composer from Massachusetts.  Anna Lloyd Jones was his mother and a teacher.  They separated when Frank turned fourteen.  William left after the divorce and was never seen again.  Wright chose the career of an architect when he turned nineteen.  He enrolled at the University of Wisconsin-Madison in 1886 and studied civil engineering.  He did not graduate, but received an honorary degree in 1955.

Frank landed in Chicago in 1887.  The Great Chicago Fire of 1871 and a population boom raised the demand for new developments.  He was hired as a draftsman at Joseph Lyman Silsbee.  Future famed architects George W. Maher and George Grant Elmslie were among the firm’s employees.  He soon worked on two projects for family members.  Time passed and he left Silsbee over insufficient pay.  He realized he was incapable of handling the building design alone at his next job and returned to Silsbee with a higher salary.

In 1888 he joined Adler & Sullivan as an apprentice.  He clashed with the other draftsman.  Sullivan did too and took Wright under his tutelage.  Two years later he was promoted to head draftsman and was in charge of all residential designs.  His work ethic ignited and projects spilled into the weekends and after hours.  Lavish tastes and an opulent lifestyle strained his finances.  The architect leveled his debts with nine independent commissions.  Eight of the conservative designs remain today.  The outside work breached his contract with the firm and his relationship with Sullivan splintered.  The two did not speak for twelve years.

Frank the tank started his own practice in 1893.  He moved into the Steinway Hall building three years later.  His first commission was the Winslow house in River Forest, Illinois.  Simple geometric windows and horizontal lines permeated the design.  The practice relocated to his personal home in Oak Park, Illinois in 1898.  His home studio birthed all of his enterprises for the following ten years.  He constructed four houses from 1900 to 1901.  His skillset grew.  The buildings of the era were called the prairie houses.

Several public commissions were finished by 1917.  The Unity Temple in Oak Park, Illinois was unveiled in 1905.  The Geneva Inn in Lake Geneva, Wisconsin ended in 1911.  It was demolished in 1970.  Midway Gardens was completed in Chicago, Illinois by 1913 and Banff National Park Pavilion in Alberta, Canada in 1914.  From 1917 to 1922 Frank Lloyd Wright worked in Japan.  The Imperial Hotel and Jiyu Gakuen Main Building were the among the lauded creations.  His time overseas left a lasting impression on the local architects and craftsmen.

The Usonian Houses began construction in the early 1930s.  Frank used the term usonia to detail the New World character of the American landscape and country.  The homes were compact single-story dwellings that often formed an L-shape around a garden terrace.  They were located on unusual and inexpensive land.  The residence elevated the surroundings and served as an aesthetic focal point.  The beautiful structures are found nationwide from Baltimore, Maryland to Palo Alto, California.

Frank Lloyd Wright’s masterpiece was finished at Mill Run, Pennsylvania in 1937.  It was built for Edgar J. Kaufmann Sr. over a thirty-foot waterfall and titled Fallingwater.  The homestead was designed to be a family getaway and bring the occupants closer to their natural surroundings.  Limestone was used for all verticals and concrete for the horizontals.  It cost one hundred fifty-five thousand dollars or three million one hundred fifty thousand today.  Wright was paid eight thousand (one hundred sixty thousand dollars, 2022).  Supplemental steel supports were added in the 1990s.  Post-tensioning was completed in 2002.

From 1943 to 1959, Frank worked in New York City on the Solomon R. Guggenheim Museum.  The central geometry allows the visitor to take an elevator to the top and descend the central spiral ramp to view the paintings from above.  The Guggenheim is Wright’s most recognized structure.  His sole skyscraper was assembled between 1952 and 1956 in Bartlesville, Oklahoma.  The Price Tower is nineteen stories and two hundred twenty-one feet high.

The master never cited his influences.  Scholars have aggreged that there are five.  The American architect Louis Sullivan was the first.  Nature and the patterns and colors of plant life is another.  The music of Beethoven, Japanese art and buildings and Froebel gifts are the rest.  The gifts are German educational play materials for adolescents.  Frank Lloyd Wright was married three times.  He had three daughters and four sons.  He was hospitalized with abdominal pains on April 4, 1959.  He passed away five days later at the age of 91 in Phoenix Arizona.

“Study nature, love nature, stay close to nature. It will never fail you.”