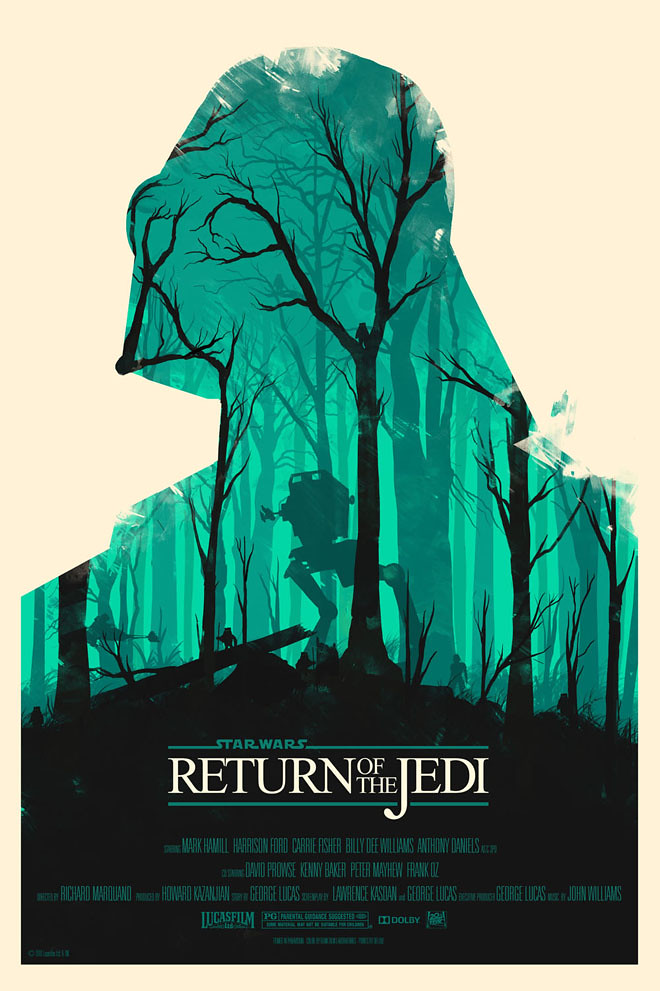 Star Wars: Episode VI – Return of the Jedi was directed by Richard Marquand.  It was written by George Lucas and Lawrence Kasdan.  Return of the Jedi was released in 1983 by 20th Century Fox.  The story concludes the original trilogy of Star Wars (1977) and The Empire Strikes Back (1980).  It was the highest grossing film in 1983 and made almost four hundred million dollars.  The events are set one year after the conclusion of Episode V.

Darth Vader surveys the progress of the new and more powerful Death Star.  He talks with Moff Tiaan Jerjerrod and informs him that the Emperor is coming.  Tiaan agrees to increase the pace.  Luke Skywalker lands on Tatooine to rescue Han Solo.  C-3PO and R2-D2 cruise into Jabba the Hutt’s palace and play a holographic message that demands Solo’s release and states the droids are a gift.  Jabba accepts the gesture and says there will be no bargain.  C-3PO is ordered to be Jabba’s translator.

The day ends and the night begins.  Jabba sends one of his slaves through a trapdoor into the rancor pit.  The monster eats her.  Princess Leia walks in and offers Chewbacca to Jabba to collect his bounty.  He takes the Wookie.  Time passes and Leia releases Han from the carbonite.  They kiss and move to escape.  Jabba and his minions capture them.  Leia is degraded and made into his new slave.  Luke comes to the palace and a fight breaks out.  He falls into the rancor pitt.  He is removed after he slays the beast.  Jabba orders the super friends to death by the sarlacc at the Great Pit of Carkoon.

The Great Pit of Carkoon

The sun rises and everyone boards a sail barge to the execution pit.  Han is blind from the aftereffects of carbonization and worried.  Luke tells him to chill.  C-3PO announces the death sentences and says the condemned can give their final speech.  Skywalker offers Jabba one final chance to release them.  The Hutt laughs.  R2-D2 launches Luke’s lightsaber towards the Jedi.  He catches it and pandemonium begins.  Luke frees Han and Boba Fett flies towards the heroes.  Lando falls.  He is saved. Fett dies. Leia sabotages the barge.  It explodes and Skywalker and company escape.  The pandemonium ends.

Emperor Palpatine enters the Death Star and praises Darth Vader.  Luke and R2 land on Dagobah and meet a dying Yoda.  The Jedi Master confirms that Vader is his father and his training is complete.  Yoda perishes and the spirit of Ob-Wan Kenobi speaks to Skywalker.  He reveals that he has a twin sister and Luke senses it is Leia.  Time passes and the Rebel Alliance being their assault on the Death Star.  Leia, Luke, Han, the Wookie and the droids are dispatched on the forest moon of Endor to take down the deflector shield generator.

Progress is made and halted after an Ewok booby trap ensnares the rebels.  C-3PO is declared a god and they are freed.  The Ewoks agree to join their cause.  Luke tells Leia they are related and Vader is their father and that he is going to confront him.  Luke surrenders to the Empire and meets the Emperor with his papa.  Return of the Jedi.  Palpatine discloses his grand scheme and impending trap.  The Rebel fleet exit hyperspace and discover the shield is still operational.  The team on Endor is captured.  The Ewoks unleash a counter attack.  Skirmishes echo on land and in space.

Luke moves on Darth Sidious.  Vader stops him and a lightsaber duel begins.  He threatens his son by claiming he will turn his sister to the dark side.  The pace quickens and Luke wins out.  Sidious tells him to give into his anger and join him.  Skywalker refuses and casts aside his lightsaber.  The Endor team destroys the shield.  Palpatine uses Force lightning to electrocute Luke.  The Jedi cries out to his father.  Vader cleanses his darkness and throws his master into the abyss.  His life support system is destroyed during the process.

The Millennium Falcon and allied fighters move on the Death Star.  Evacuations begin.  Luke takes his father to safety.  Anakin tells him to stop and remove his mask so he can look at him with his own eyes. The mask is removed.  Pleasantries are shared and the patriarch dies in peace.  Luke bows in sadness.  The Falcon reaches the main reactor and fires.  The Death Star is obliterated.  Luke escapes and rendezvous with his friends.  Han senses Skywalkers love for Leia and she says he is her brother.  They kiss.  The Galactic Civil War ends.

Back on Endor Anakin’s body is cremated on a funeral pyre.  His soul becomes one with the force as the celebration begins.   Rebels throughout the galaxy join in the festivities.  Tatooine, Naboo, Bespin and Coruscant are included.  Luke embraces Han, Lando, Chewbacca and the droids.  He catches a glimpse of Kenobi, Yoda and Anakin’s ghosts.  The vision fills him with light.  Star Wars: Episode VI – Return of the Jedi ends.

0 comments on “Star Wars: Episode VI – Return of the Jedi”