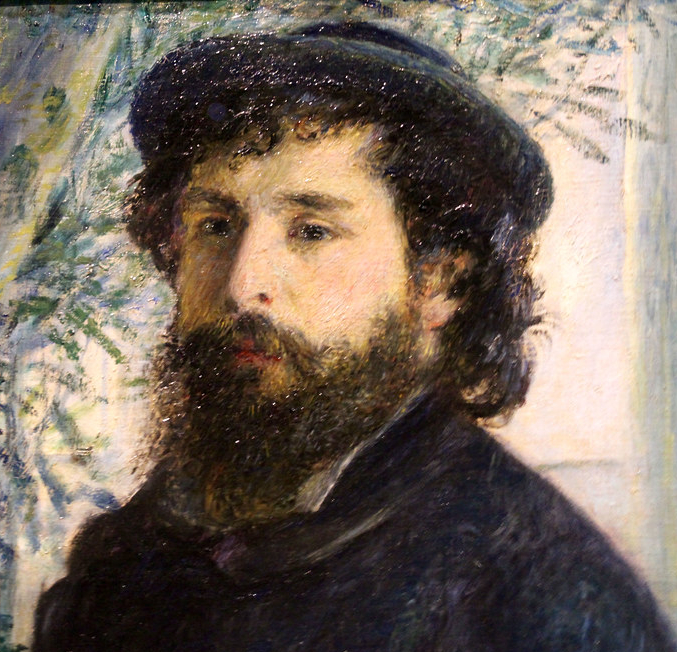 Claude Monet was a French impressionist painter.  He was born on November 14, 1840 as Oscar-Claude Monet in Paris, France.  Louise Justine Aubrée Monet and Claude Adolphe Monet were his parents.  Monet was raised Catholic.  Papa Monet wanted little Claude to go into the family retail business.  Little C wanted to be an artist.  Mama Monet was a singer and supported his creative drive.  Her encouragement produced a legend.

In 1851, Claude Monet enrolled in the Le Havre secondary school of the arts.  He drew portraits for money by the time he turned fifteen.  The marine painter Eugène Boudin met Monet in 1858 and taught him new techniques.  Boudin’s lessons helped escalate the young painter’s career.  Monet’s mother passed away when he was sixteen and he dropped out of school.

He studied in Paris at the Académie Suisse from 1858 to 1860.  Claude was drafted into the military and served in Algeria from 1861 to 1862.  An illness caused his departure and he bought out his remaining required service.  His father refused to help because his son would not give up on painting.  Algeria provided a new perspective and helped shaped Monet’s career.

Time passed and Claude joined the artist Charles Gleyre’s studio.  He met two of the future impressionist stars Frédéric Bazille and Pierre-Auguste Renoir at the studio.  Bazille would become one of his closest friends and he painted next to Renoir daily.  Le Déjeuner sur l’herbe (Luncheon on the Grass) was finished in 1866 and was later recognized as the most important painting from his early period.  His work was not accepted and thought to be radical during this time.  Money was an issue, but he had support from hometown patrons.

He married his mistress Camille Doncieux in 1870 before the Franco-Prussian war.  They moved to London to avoid the conflict in a self-imposed exile.  Claude Monet’s paintings were not allowed in the Royal Academy exhibition.  His family moved to the Argenteuil suburbs of Pairs in 1871.  He purchased a sail boat in order to paint on the Seine.  Money was still tight, but an inheritance from his deceased father helped make ends meet.

Limited success came with 1872 and Monet’s paintings began to sell.  He formed the Anonymous Society of Painters with Renoir, Sisley, Cézanne, Degas, Morisot and Pissaro.  Claude was the leader of the impressionist group.  He became the most recognizable landscape painter of the bunch.  In 1874, his painting Impression, Sunrise (1872, Impression, soleil levant) was exhibited.  The art critic Louis Leroy penned a scathing review and ended up coining the term Impressionism from the title of Monet’s painting.  The artist collective adopted the name to spite Leroy.

A series of three more exhibits followed and concluded in 1882.  The paintings displayed were met with mixed reviews and varying levels of success.  Regardless, Monet became a fixture in the art world and his work in the 1870’s marked a turning point for the impressionist movement.  His wife passed away during the same timeframe.  Her departure caused him to experiment with darker color tones and focus on the elemental aspect of nature for the rest of the decade.  He moved in with Alice Hoschedé in 1881.  The couple married in 1892.

Claude continued his studies of the Seine and painted the river from different perspectives and climates.  He traveled to Normandy and the Netherlands and was a workaholic.  His drive paid off and his money problems ended.  The success stunted his creativity.  He pivoted to single subjects of flowers and haystacks to alleviate his angst.  Water lilies became his obsession in 1899 and were featured in his art for the next twenty years.  He would go on to master their reflections with light and alternating viewpoints.

The artist was met with tragedy in 1911 when his second wife died.  His son passed away in 1914.  The loss left Monet depressed.  He started to develop cataracts at the same time and had issues with his vision.  His health problems caused fluctuations with his perception of color.  His brushstrokes became larger and his colors darker.  He labeled his paint to help offset his new challenges.

He withdrew from society over the following years and painted less.  His fame landed him a contract to paint for the French government from 1914 to 1918.  Other pieces sold for two hundred thousand francs.  He received cataract surgery in 1923.  It was successful and he was able to retouch some of his darker works.  On December 5, 1926 Claude Monet died from lung cancer at the age of eighty-six.  He is buried in the Giverny church cemetery.  His funeral was small and one guest removed the black cloth from the coffin.  It was replaced with one with a floral design.  The flowers draped over the casket were a fitting metaphor for his life.

Monet’s paintings continue to sell for large sums of money.  In 2004, Houses of Parliament, the Parliament, Effects of Sun in the Fog (1904) sold for twenty million dollars.  Four years later, his railway bridge picture Le Pont du chemin de fer à Argenteuil (1874) fetched over forty-one million dollars at auction.  Water Lily Pond (1919) sold for eighty million a month later.  It was one of the top twenty highest prices for a painting at the current time.  Several paintings were stolen by the Nazi regime.  Most have been recovered and returned to their rightful owners.

“All I did was to look at what the universe showed me, to let my brush bear witness to it.”