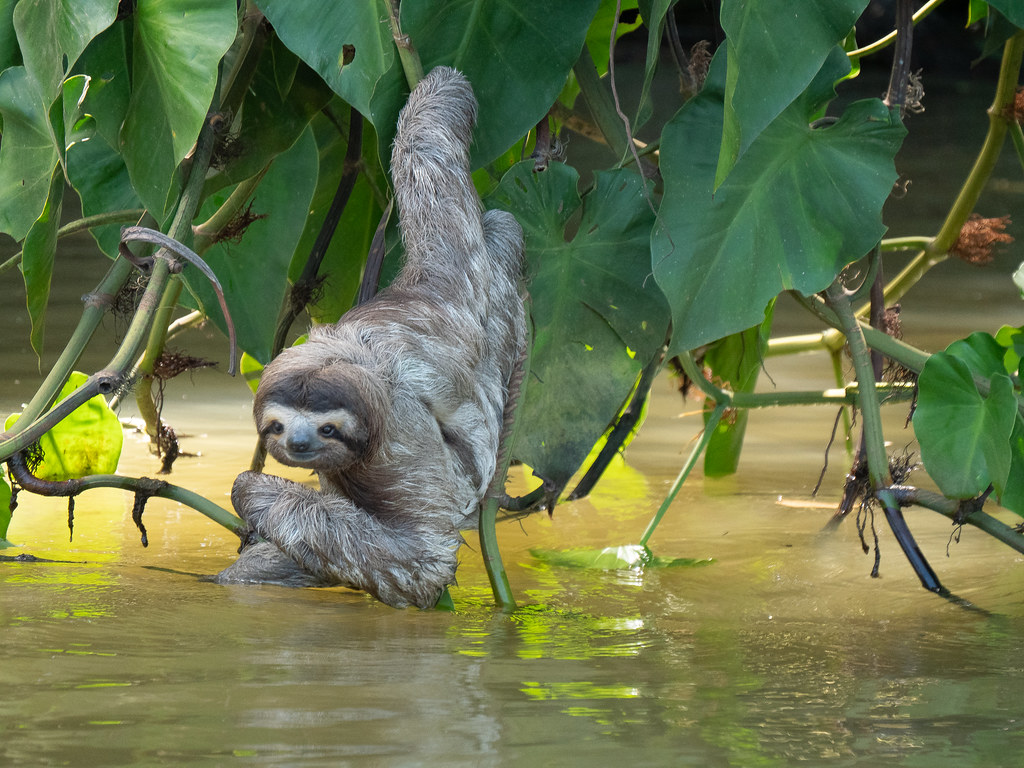 Sloths are members of the Xenarthra Superorder.  The Superorder includes armadillos and anteaters.  The name is derived from the Ancient Greek words xénos (alien or foreign) and arthron (joint).  An adequate identifier is formed when the words collide.  The sloth is named after its slow and deliberate motions and low metabolism.  They may be lazy, but they are quick to love and loyal friends.  A sloth is the first to arrive when their associates are in trouble.  Well…maybe the first to head towards the scene.

Six sloth subspecies (SSS) are in existence.  They are broken into two genera.  The three-toed sloths (Bradypus) and the two-toed sloths (Choloepus).  Both have three toes on their rear limbs, but the two-toed sloth has two digits at the end of their arms.  They are tenuously related and have different ancestors.  Parallel evolution has morphed and brought them closer together.  Modern sloths are very similar.

Some species have gone extinct.  The ground sloths that inhabited South and North America disappeared eleven thousand years ago.  Hunting and climate change from the most recent ice age were the major factors.  Caribbean sloths departed from the planet five thousand years ago.  They were gone before their Greater Antilles habitat was colonized.  South America’s marine sloths went extinct at the end of the Pilocene (five to two and half million years ago).  The closure of the Central American Seaway caused their demise.

Color is perceived, but the sloth has poor eyesight.  Their hearing is abysmal.  They rely on their sense of touch and smell to find food.  Their low body temperature oscillates between eighty-six and ninety-three degrees Fahrenheit when they are active.  It drops further when they are resting.  It is a safe assumption to say that it falls often.  A sloth’s body temperatures will change based on their environment (heterothermic).

Sloths range from twenty-four to thirty-one inches long.  They weigh between eight to seventeen pounds depending on the species.  Two-toed sloths are larger than their extra digit relatives.  They have elongated limbs and small heads.  Their ears are smaller.  Three-toed sloths have short tails that can grow a little over two inches.  The tailed sloths have eight to nine cervical vertebrae.  The two-toed sloths have seven.

The outer fur hairs of sloths grow in the opposite direction of other mammals.  It is normal for hair to grow towards the extremities.  Sloths spend most of their time with their limbs above their bodies.  Their hair grows against the grain to protect them from the elements when they are upside down.  A symbiotic species of algae mingles and lives within their fur.  The partnership provides natural camouflage that hides them from various predators (eagles, ocelots and jaguars).  Some sloths host a variety of arthropods in their thriving fur coats.  Moths, mites, beetles, mosquitoes, sandflies, lice, ticks, flies and vampire bugs all live in harmony.  The moths are in charge of fertilizing the algae and ensuring the camouflage’s survival.

What do sloths eat?

Cecropia leaves are sloths’ favorite food.  They are the slowest mammal when it comes to digestion speed.  Adolescents learn to eat by licking their mother’s lips.  Three-toed sloths are herbivores.  They stick to a few core plant species and never deviate.  The two-toed is more adventures and an omnivore.  They love fruits and leaves, but will feast on insects, tiny lizards and even carrion.

The low nutrients in the staple of their diet does not digest well.  Sloths have slow multi-chambered stomachs to compensate.  A special bacterium dissolves the tough leaves.  Two thirds of their body weight is made up of the contents of their stomach.  The digestive process can take over a month to complete.

Three-toed sloths relieve themselves once a week.  They dig a hole and cover up their mess afterwards.  They revisit the same spot every time and are vulnerable to predators during the journey.  The large amount of energy and danger of the ordeal has been branded as a scientific mystery.  Other sloths simply take care of business at the base of the main tree they live and feed at.  The feces help nurture the tree and their moth roommates lay their eggs in it.  The moth larvae feeds at their birthplace.  They fly back up to the sloth’s fur when they mature and fertilize the algae.

Sloths are professional hosts, but they do not like to party.  They live in solitude and come together to breed.  Sometimes female sloths will socialize.  The gossip is easy to understand, but each word takes forever to pronounce.  The females have a polished vocabulary, but monosyllabic words dominate the small talk.

One newborn is produced per litter.  Gestation can take anywhere from six to twelve months.  Females will reproduce once a year.  The natural lifespan of a wild sloth is unknown.  A proper study has never been conducted.  Their average age in captivity is around sixteen years.  The oldest recorded lived for forty-nine years at the Smithsonian Institution’s National Zoo.