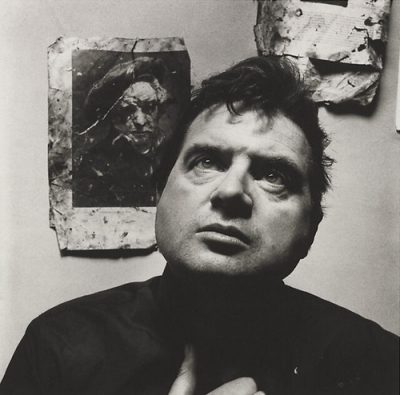 Francis Bacon was a contemporary artist that created thought evoking and brutal paintings.  He lived from 1909 to 1992.  It is unclearer how much he enjoyed bacon.  Francis was busy painting and might have skipped a breakfast or two.  Bacon can be prepared in several ways and eaten at any time of day, so diagnosis is difficult.  His mother was Christina Winifred “Winnie” Firth, the heiress to a steel and coal mine fortune (Sheffield).  Papa Bacon was Anthony Edward Mortimer Bacon.  Eddy was the grandson of Anthony Bacon, who was related to Nicholas Bacon (half-brother of Sir Francis Bacon).  Sir Francis B was an influential philosopher that helped develop the scientific method.  Lots of bacon and lots of accomplishments.

On October, 28 1909 Francis Bacon was born in Dublin.   He had two brothers and sisters.  His nanny Jessie Lightfoot raised him.  They were very close.  The Bacons moved often and she provided structure.  Bacon did not get along with his father.  He spent the late 1920’s living off of a small allowance from Winnie’s trust fund.  The amount was less than the minimum wage at the time.  He worked various part-time jobs to survive.  Francis spent time in Paris and Berlin.  He began to cultivate his taste for luxury and absorbed art.

Francis Bacon settled in London at the end of 1928.  He rented a studio that he shared with his nanny and an art collector.  The subjects of his paintings were his acquaintances.  He left in 1931 and moved to Chelsea.  The Three Dancers (1925) by Pablo Picasso inspired Bacon’s Crucifixion artwork in 1933.  The oil painting was filled with dark black tones that were complimented by a white and gray abstract human.  It was poorly received by the public.  The negative press caused Francis Bacon to suppress his earlier works and stop painting for some time.

In 1937, Bacon’s paintings were featured in the Young British Painters exhibit in London.  Roy De Maistre and Graham Sutherland (Christ in Glory in the Tetramorph (1962)) were also presented.  Four pieces were selected to show (Three Studies for Figures at the Base of a Crucifixion (1944), Figures in a Garden (1936), Abstraction, and Abstraction from the Human Form and Seated Figure).  One was purchased and one would become his magnum opus.

Eddy passed away in the summer of 1940.  Bacon was named the executor of the will.  The fallout from the war in London aggravated his asthma around the same time.  He moved to a cottage located in Petersfield, Hampshire and continued to paint.  The most notable work created at the cottage was Figure Getting Out of a Car (1940).  He relocated to John Everett Millais’s (Ophelia (1852)) former home in 1943.  Francis converted the billiard room into his studio.

Fame arrived in the mid-1940’s.  The Three Studies for Figures at the Base of a Crucifixion triptych was his turning point.  He dismissed all of his paintings that were created before it.  His oil painting on linen, Painting 1946 (1946), sold during the Musée National d’Art Moderne’s group show Exposition internationale d’art modern.  The Hanover Gallery was the purchaser and Francis Bacon moved to Monte Carlo with the profit.  He spent a few years living in a string of hotels and frequenting the casinos.  Gambling became an issue and he slipped into debt.  His artistic output suffered.

Bacon returned to London in 1948.  His Head Series showed in 1949.  The most recognizable from the set is Head VI (1949).  It is based on the Portrait of Innocent X (1650) by Diego Velázquez.  His nanny died in the Spring of 1951.  The event propelled him into grief.  However, he was prolific during the decade.  Most of his works were diptychs (two panels) and triptychs (three panels).  The abstracted figures sat on geometric spaces with plain backgrounds.  Francisco Goya (Saturn Devouring his Son (1823) was a main influence.

George Dyer met Francis in a pub in 1963.  They became partners.  Alcoholism was an issue for them both, but their relationship stimulated Bacon’s art.  Dyer was often a subject.  Francis’s fame allowed them to exist in a bohemian atmosphere.  His following morphed into an entourage and his success was the benefactor.  A show at the Grand Palais dubbed Bacon Britain’s greatest living painter.  It was a time of prosperity, but Dyer overdosed in 1971 before the exhibition.  The dichotomy of accomplishment and grief percolated.

Chronic asthma compromised Bacon’s health in 1992.  He was hospitalized during his holiday in Madrid.  A heart attack on April, 28 1992 was the cause of his death.  His estate was valued at fifteen million dollars when he passed.  John Edwards was his heir.  Lawsuits followed with various acquaintances. They were settled out of court when John was diagnosed with lung cancer in 2002.   In 1998, Francis’s studio was donated to the Hugh Lane Gallery (Dublin).  The room was mapped and preserved for posterity.  There were over seven thousand items.  The studio opened to the masses in 2001.

The first Catalogue raisonné (annotated listing of an artist’s work) of Francis Bacon was compiled by Ronald Alley in 1964.  Close to six hundred painting were released in a five-volume serialization in 2016.  Martin Harrison (curator) spearheaded the endeavor and it was titled Francis Bacon: Catalogue Raisonné.

“Great art is deeply ordered. Even if within the order there may be enormously instinctive and accidental things, nevertheless they come out of a desire for ordering and for returning fact onto the nervous system in a more violent way.”