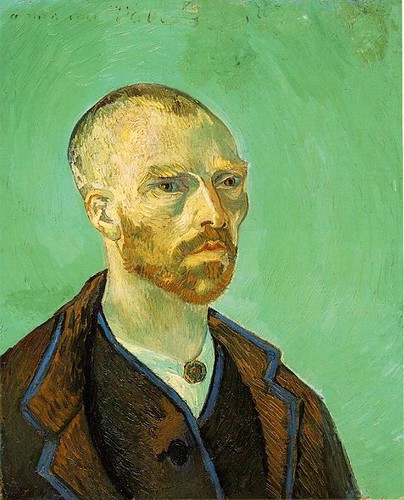 Vincent van Gogh was born on March 30, 1853 in Groot-Zundert, Netherlands.  The Dutch post-impressionist painter is one of the most recognizable artists today.  His mother was Anna Cornelia Carbentus.  She was born in The Hague and her family was wealthy.  Van Gogh’s father was Theodorus van Gogh.  Anna homeschooled Vincent until 1864 when he was sent to a boarding school in Zevenbergen.  The move was hard on young Vincent and he petitioned to return home.  His parents denied his request and moved him to a middle school in Tilburg in 1866.  He developed a passion for art at Tilburg and was talented.  His isolation overshadowed his hobby and he returned home in 1868.

The art dealer and auction house Goupil & Cie hired Vincent in the summer of 1869.  His training finished in 1873 and he was transferred to the company’s London Branch.  Work was pleasant and the twenty-year-old flourished at his job.  His mental state declined a few years later and he relocated to Paris in 1875.  A year later he moved to England and worked at a boarding school.  Religion became his primary passion and Van Gogh expressed interest in becoming a pastor.

He moved in with his uncle Johannes Stricker in Amsterdam.  He was a famous theologian and helped Vincent prepare for the University of Amsterdam theology entrance exam.  Van Gogh failed the examination and moved out in 1878.  His next stop was a three-month program at a Protestant missionary near Brussels.  He failed that too.

In 1879 he did missionary work in Belgium.  He became accustomed to the people and landscape of the surrounding coal-mining community.  The area was inspiring and he began to draw the people and society around him.  Vincent van Gogh attended the Académie Royale des Beaux-Arts to study art under his uncle’s suggestion in 1880.  He focused on the standard rules of perspective and modelling and anatomy.

Vincent stayed with his parents in 1881 and used his neighbors as subjects for his artwork.  Sometime later, he traveled to The Hague to link up with his second cousin Anton Mauve.  Mauve had experienced success in the industry and suggested that Van Gogh should paint with pastels and charcoal.  He followed his advice.  Anton introduced Vincent to watercolors and oil painting in 1882.  He became the young artist’s teacher, but they had a falling out within a few months.  The new paint mediums allowed Van Gogh to reach new heights.

The outdoors was Vincent’s preferred painting environment.  He created The Parsonage Garden at Nuenen in 1884.  The piece showcased his budding talent and exemplified his open-air studio.  He produced close to two hundred oil paintings throughout the following year.  His first exhibit was in the summer of 1885.  It yielded little success.  He moved to Antwerp in the winter before 1886.  Money was tight and Vincent van Gogh lived off of tobacco, coffee and sweet, sweet bread.  He started drinking heavily.

His lifestyle was dismal, but his talent exploded.  He studied color theory and the work of Peter Paul Rubens.  He attended the Academy of Fine Arts in Antwerp and clashed with the staff.  He ended up having to repeat a year.  Vincent moved to Paris in 1886.  He witnessed the rise of the Neo-impressionists and was slow to acknowledge their style.  He moved near the Seine and developed numerous paintings of the nearby restaurants and parks.  He finished Bridges across the Seine at Asnières in 1887.  It showcased his use of light and reflection.  Time passed and he met Paul Gauguin in Paris.

In 1888 Van Gogh was prolific in smoking, drinking and painting.  He moved between a few places in France and was shown in various galleries.  His highlighted works of the year included Bedroom in Arles, Still Life: Vase with Twelve Sunflowers, The Night Café, Café Terrace at Night, Van Gogh’s Chair and Starry Night Over the Rhone.  A friendship with the painter Eugène Boch was formed during the summer.  Gauguin visited Vincent and a creative friendship blossomed.  The pair had a mutual respect for each other’s talent, but the relationship was tumultuous.

The two artists created their own chasm of creativity that left Van Gogh attached to Gauguin.  He was frightened of abandonment and often threatened self-harm. He severed off his ear on December 23, 1888 and delivered it to a woman at a nearby brothel that the pair frequented.  He passed out from loss of blood and was taken to the hospital.  The ear was delivered, but it was too late to reattach.  Vincent had no recollection of the mayhem and was committed to a hospital for delirium and acute mania.

Gauguin left and Van Gogh was released.  The two corresponded with each other and the artist resumed painting.  Mania returned and he was sent to a hospital.  He was released and voluntarily entered an asylum in the middle of 1889.  He had two cells and one was used as a studio.  The clinic and its garden became his new subject matter.  He incorporated swirls into his paintings.  They manifested in his masterpiece The Starry Night (1889).  Van Gogh left the clinic in 1890 and went back to Paris.

His work was recognized, but depression consumed him.  He shot himself on July 27, 1890 and returned to the hospital.  There was no surgeon present.  He was treated with the available resources.  Vincent van Gogh died from an infection caused from the attempted suicide a few days later on July 29, 1890 at the age of thirty-seven.  His work endured and permeates our culture today.

“The fishermen know that the sea is dangerous and the storm terrible, but they have never found these dangers sufficient reason for remaining ashore.”