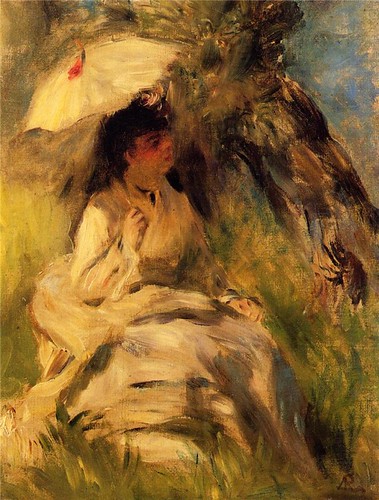 Pierre-Auguste Renoir was a French impressionist painter.  He was born on February 25, 1841 in Limoges, France.  Papa Renoir was named Léonard.  His favorite Teenage Mutant Ninja Turtle was Donatello.  Leonardo was third after Raphael.  Léonard was a tailor.  The Renoirs moved to Paris in 1844.  The Louvre was close by.  Pierre-Auguste displayed artistic talent at an early age.  Singing was his first great love.  His teachers encouraged his pursuits, but he had to quit his hobby to help his family’s dire financial situation.  He was thirteen.

Renoir worked in a porcelain factory.  His talent was obvious and the work was tiresome.  He retreated to the artwork of the Louvre to relax.  The factory boss noticed his talent and Renoir studied for the Ecole des Beaux Arts entry exams.  He painted on the side and his skillset increased.  In 1862 he studied under the Swiss artist Charles Gleyre.  He met fellow impressionists Claude Monet, Alfred Sisley and Frédéric Bazille during his internship.

Money was tight and the young artist was often unable to buy paint.  His first exhibit was at the Paris Salon in 1864.  The event was the official art display of the Académie des Beaux-Arts.  It was considered the most prominent annual art show in the Western world and ran between 1748 and 1890.  The budding Franco-Prussian War and the surrounding chaos delayed Renoir’s recognition.

Pierre-Auguste’s breakthrough came during the Paris Salon of 1868.  His canvas Lise or Lise with a Parasol (1867) was an instant success.  The oil painting featured the model Lise Tréhot in a forest wearing a white dress while delicately holding a black lace parasol.  The umbrella casts a shadow that yields a brilliant contrast of light.  It also protected the protagonist from the harmful UV radiation of the Sun.  The artwork was an early display of Renoir’s talent and foreshadowing for what was to come.

In 1871 Renoir painted near the Seine River in the Paris Commune.  He was accused of being a spy and the Communards almost threw him into the water.  Raoul Rigault, a journalist and leader of the commune, recognized the artist and prevented the heinous act before completion.  Renoir had protected him at an earlier juncture.  Three years later his relationship with his benefactor Jules Le Cœur ended.  The termination of his ten-year friendship was devastating and the rift caused an alteration in his artwork’s subject matter.

Time passed and Édouard Manet and Camille Pissarro became prominent influences.  Rejection was commonplace and Pierre-Auguste Renoir joined forces with Monet and other artists to found the Impressionist movement.  Their first exhibit took place in the Spring of 1874.  Renoir showcased six paintings.  The majority of the work was dismissed, but Pierre’s was well received.  The buzz from the pundits caught the attention of the art dealer Durrand-Ruel in London.  He displayed two Renoir pieces later that year.

The second Impressionist show was held in 1876.  Pierre-Auguste submitted a series of portraits with the hopes of attracting new commissions.  He diversified his subject matter during the third exhibit.  Renoir did not attend the fourth or fifth Impressionist event.  He chose to stage his work at the Paris Salon instead.  Mme Charpentier and her Children (1878) was an international success at the 1879 Salon.  The momentum thrusted Renoir into stardom.

The star travelled to Algeria in 1881 with his new income.  He soaked in the work of Diego Velázquez in Italy and traveled to Rome.  In 1882 he met the composer Richard Wagner in Sicily.  He painted his portrait in under an hour.  Life was good.  Sometime later he contracted pneumonia.  Life was less good.  He recovered in Algeria for two months.  The following summer he stayed in Guernsey near the English Channel.  Renoir composed fifteen paintings in the span of a month.  A nearby bay called Moulin Huet was the main focal point.  Some of the paintings were converted into postage stamps.

The artist’s fame increased and Queen Victoria requested his services for her Golden Jubilee (fiftieth anniversary) in 1887.  Renoir donated several pieces to express his loyalty.  Three years passed and he married Aline Charigot.  She was a dressmaker and twenty years younger than him.  They had three boys.  One was an artist, one a filmmaker and one an actor.  Aline was commonplace in several of Pierre’s canvases.

In 1892, rheumatoid arthritis afflicted the artist.  The condition worsened and Renoir moved near the French Riviera for the warmer climate.  The year was 1907.  His disease caused him to change his painting techniques to dilute the pain.  Complications continued and several fingers became paralyzed.  He persevered and strapped a brush to his hand to continue to do the thing he loved.  He collaborated with other artists for support and made a series of sculptures.  Pierre-Auguste Renoir passed away on December 3, 1919 at the age of seventy-eight.  His artwork endures.

“The work of art must seize upon you, wrap you up in itself, carry you away. It is the means by which the artist conveys his passion; it is the current which he puts forth which sweeps you along in his passion.”