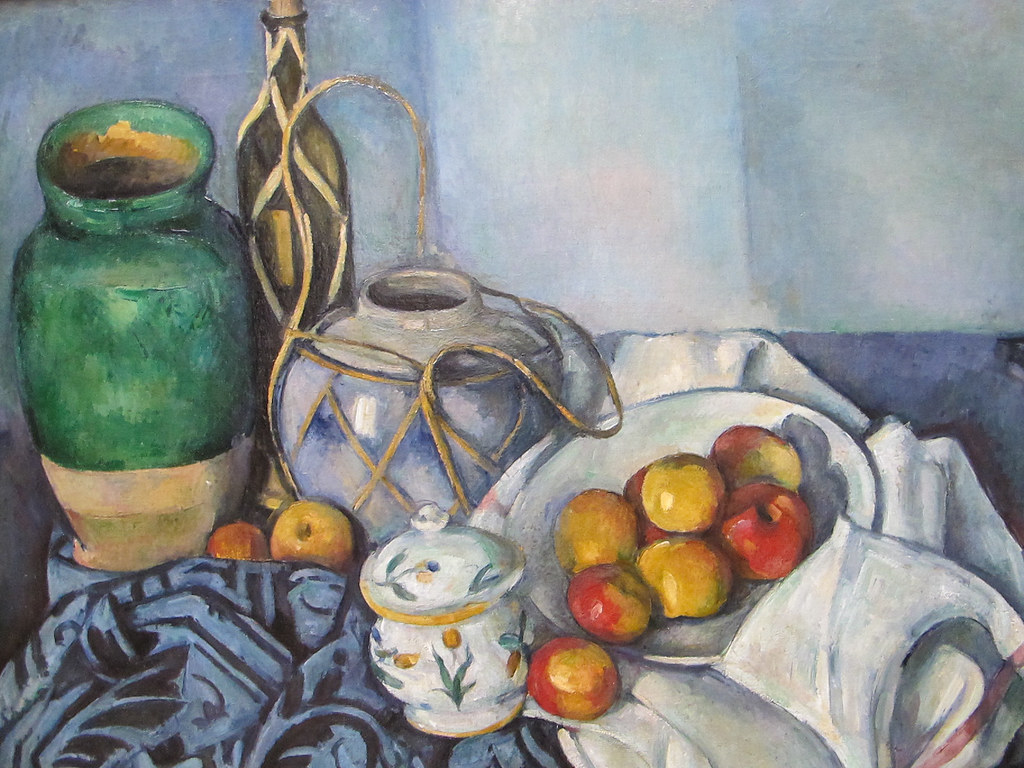 Paul Cézanne was a post-Impressionist painter and artist.  His fluid style pushed nineteenth century Impressionism towards the early twentieth century’s cubism.  Cézanne was born on January 19, 1839 in Aix-en-Provence, France.  Papa C was Louis-Auguste.  He was a banker and milliner.  The matriarch was Anne-Elisabeth-Honorine Aubert.  Paul had two sisters named Marie and Rose.

Cézanne joined the Satin Joseph school in Aix at the age of ten.  The sculptor Philippe Solari was his classmate.  He enrolled into Collège Bourbon (Mignet) in 1852.  His interests in the arts flourished.  Paul transitioned to the Free Municipal School of Drawing in Aix five years later.  Drawing was his focus.  In 1859 his career diverted to the study of law at the University of Aix-en-Provence.  He took evening courses at a local art school and won second prize for his artwork in the same year.  Painting became his passion to the disappointment of his father.  The artist moved to Paris in 1861.  The father and son reconciled sometime later.

Time passed.  His application to the École des Beaux-Arts was rejected.  His work improved.  Cézanne met the Danish-French Impressionist painter Camille Pissarro.  Paul became his disciple.  They traveled and painted landscapes over the next decade.  Their relationship would grow into one of working equals.  In 1862 the budding artist was rejected by the École des Beaux-Arts for a second time.  He continued to paint and interacted with other upcoming artists that included Pierre-Auguste Renoir, Claude Monet and Alfred Sisley.  Cézanne diverted from his peers and was influenced by Gustave Courbet and Eugène Delacroix.  He dedicated himself to the principal of untarnished reality.

Monet, Pissarro and Manet were rejected from the Salon de Paris in 1863.  The country was outraged.  Napoleon III held a Salon des Refusés in protest.  Paul Cézanne was included.  He was rejected from the main event from 1864 to 1869.  He broke through when his friend was on the Salon’s jury.  The year was 1882.  The painting was Portrait of Louis-Auguste Cézanne, The Artist’s Father, Reading “L’Événement (1886).  It was the only time he was selected.

He moved to Marseille in 1870.  He completed several paintings.  In 1872 he relocated near Pissarro and developed his technique.  Camille convinced him to turn away from his darker color selection.  The master demanded that Paul painted in the three primary colors of blue, yellow and red and their derivatives.  Linear contouring was to be avoided.  Shapes should be formed from color gradients.  The impressionist trademarks helped push Cézanne to higher plateaus.

He toured with the impressionists in 1874.  His irritable disposition created a rift between his peers.  His artwork bridged the gap.  The unique style generated from his persona antagonized the critics.  A Modern Olympia (1874) was his counter to the accepted elegance.  The show was a financial disaster.  His paintings began to sell to private collectors.  Paul did not participate in the second exhibition.  He submitted sixteen pieces to the third in 1877.  It was his final collaboration with them.  He teamed up with Paul Gauguin and Pissarro in 1881.  He visited Renoir and Monet over the next few years.

His Constructive Period began with a series of mountain paintings of Montagne Sainte-Victoire at L’Estaque from 1880 to 1883.  It ended in 1888 with a collection set around the commune of Gardanne.  Severe diabetes plagued the artist in 1890.  The affliction strained his relationship with humanity.  He converted to Catholicism in 1891 to cope with the illness.  He showed three pieces at the group Les XX in Brussels soon after.

In 1895 he visited Monet’s exhibition at the Durand-Ruel Gallery with Pissarro.  The experience was inspiring.  He later decided that Claude peaked in 1868.  His first solo show occurred in November.  Fifty paintings were selected out of one hundred and fifty for display at Ambroise Vollard’s gallery.  Ambroise’s purchase of the pieces skyrocketed the value of Cézanne’s work.  Most of his paintings were acquired by fellow artists before Vollard.  Monet, Renoir, Pissarro and Edgar Degas were routine buyers.

His first museum sale was in 1897.  The Mill on the Couleuvre near Pontoise (1881) was purchased by the Berlin National Gallery.  The art market responded.  His paintings began to generate thousands of francs.  Paul bought land north of the city of Aix-en-Provence in 1901.  He built a studio and moved in two years later.  He transitioned to large scale paintings as his body deteriorated. His popularity grew within the general public.  He was admonished by the bourgeoisie of the surrounding city.

His art was exhibited in 1903 at the Salon d’Automne.  The show dedicated an entire room to his work in 1904.  His brush strokes began to fade in 1905 as his paintings illuminated the art world.  In 1906 he was trapped in a storm while working in a field.  He contracted pneumonia from a case of hypothermia.  He died a week later on October 22, 1906 at the age of sixty-seven.  Paul Cézanne’s final resting place is in the Saint-Pierre Cemetery located in Aix-en-Provence.  The Card Players (1895) was procured by the Royal Family of Qatar for three hundred million dollars in 2011.  It is the third most expensive painting sold in human history.

“A work of art which did not begin in emotion is not art.”