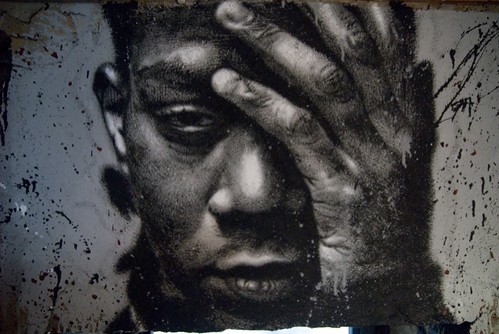 Jean-Michel Basquiat was born in Brooklyn on December 22, 1960.  He had two younger sisters and an older brother.  His brother passed away before he was born.  Matilde and Gérard Basquiat were his parents.  His mother Matilde fostered Jean-Michel’s artistic talent at an early age.  The young artist was bright and learned how to write and read at the age of four.

Basquiat enrolled at the Saint Ann’s School (The Bosworth Building 129 Pierrepont St. Brooklyn, New York) when he was a child.  He wrote a children’s book with a classmate and spent a significant amount of time at the Brooklyn Museum of Art.  Jean-Michel was hit by a car when he was seven.  His mother gave him a copy of Gray’s Anatomy to pass the time in the hospital.  The medical drawings in the book influenced his art several years later.

The artist’s parents separated sometime after.  Basquiat was raised by his father.  Matilde was committed to a psychiatric hospital when he was ten years old.  She spent the rest of her life cycling between various institutions.  Jean-Michel Basquiat was fluent in three languages (English, Spanish and French) by the time he was eleven.  He was a voracious reader of all three.

The separation of his parents and his mother’s condition caused Basquiat to run away from home.  He was fifteen at the time.  He slept outside on park benches in Washington Square Park for a week before he was arrested.  The authorities returned him to his father.  Edward R. Murrow High School (1600 Avenue L Brooklyn, New York 11230) was his place of schooling until the tenth grade.  He moved to an alternative art school named City-As-School (16 Clarkson St, New York, NY 10014) to finish his education.

In 1978, Jean-Michel Basquiat was expelled from City-As-School for shoving a pie in the principal’s face (pieing).  His father kicked him out of the house when he decided to drop out.  He was hired at the Unique Clothing Warehouse and spent his days in retail.  During the night, he began his graffiti career with his classmate Al Diaz.  He used the tag SAMO and sprayed satirical and poetic phrase all over the buildings in Lower Manhattan.

The Village Voice wrote an article on SAMO graffiti at the end of 1978.  In 1979, Jean-Michel was on the public-access tv show TV Party.  Glenn O’Brien was the host and the two formed a fast friendship.  Basquiat appeared on O’Brien’s show numerous times over the next several years.  The filmmaker Michael Holman crossed paths with the artist in mid-1979.  They formed a band named Test Pattern that was later rebranded as Gray.  The grouped performed at various venues including the Mudd Club, CBGB, Hurrah and Max’s Kansas City.

Basquiat moved to the East Village and explored his artistic interests.  He painted nonstop and covered the doors, walls and floors of his room with artwork.  His skills increased and he began to draw postcards.  He sold them throughout Manhattan.  When he was in SoHo he ran into Andy Warhol and sold one to him.  It was called Stupid Games. Bad ideas.

Al and Jean-Michel terminated their friendship and the graffiti project ended in 1980.  Basquiat scribbled SAMO is DEAD on the city walls to announce his departure.  In the summer, he participated in The Times Square Show art exhibit. He gained critical attention and was featured in the magazine Art in America.  The curator Diego Cortez displayed his work in the New York/New Wave exhibit in 1981.  An Italian dealer was enthralled and purchased a series of paintings for his gallery in Modena, Italy.

The singer of Blondie Debbie Harry was the first person to officially purchase a Basquiat painting.  It was titled Cadillac Moon (1981).  Jean-Michel appeared in the music video for the Blondie song Rapture as a disc jockey.  In the fall of 1981, he was featured in art dealer Annina Nosei’s group show Public Address.  He joined her gallery shortly after.  Basquiat moved into a nearby loft and had his first solo show at the Annina Nosei Gallery in 1982.

Jean-Michel Basquiat was the youngest artist to be featured in the twice a decade exhibit documenta, in Germany.  He was twenty-one and displayed alongside Cy Twombly, Andy Warhol, Joseph Beuys, Gerhard Richter and Anselm Kiefer.  Afterwards, Warhol and Basquiat linked up for a second time and ignited a famous friendship.  They collaborated on the painting Dos Cabezas (1982) after their meetup.

Basquiat turned twenty-two and landed a showing at the Whitney Biennial exhibition in 1983.  It was another youngest first accomplishment.  The Mary Boone Gallery showed his work in 1984.  He showed up in a paint splattered Armani suit that would become his trademark.  The New York Times Magazine published an article about the artist in 1985.  His fame reached unprecedented heights as he moved throughout the art world.  The expectations and adoration took a personal toll on his health and he turned to drugs as a coping mechanism.

Jean-Michel had a full schedule and toured the world.  Everyone wanted a piece of his talent.  He walked the runway at a Comme des Garçons show in 1987 and was featured in several exhibits.  The artist withdrew from society by the time he was twenty-six.  The passing of Andy Warhol was thought to be the cause.  He traveled to Hawaii to kick his drug habit in the summer of 1988.  Progress was made, but a relapse caused his death on August 12, 1988.  He died in his apartment in the middle of Manhattan at the age of twenty-seven.  Jean-Michel Basquiat was the radiant child that left his mark on society forever.

“Fire will attract more attention than any other cry for help.”