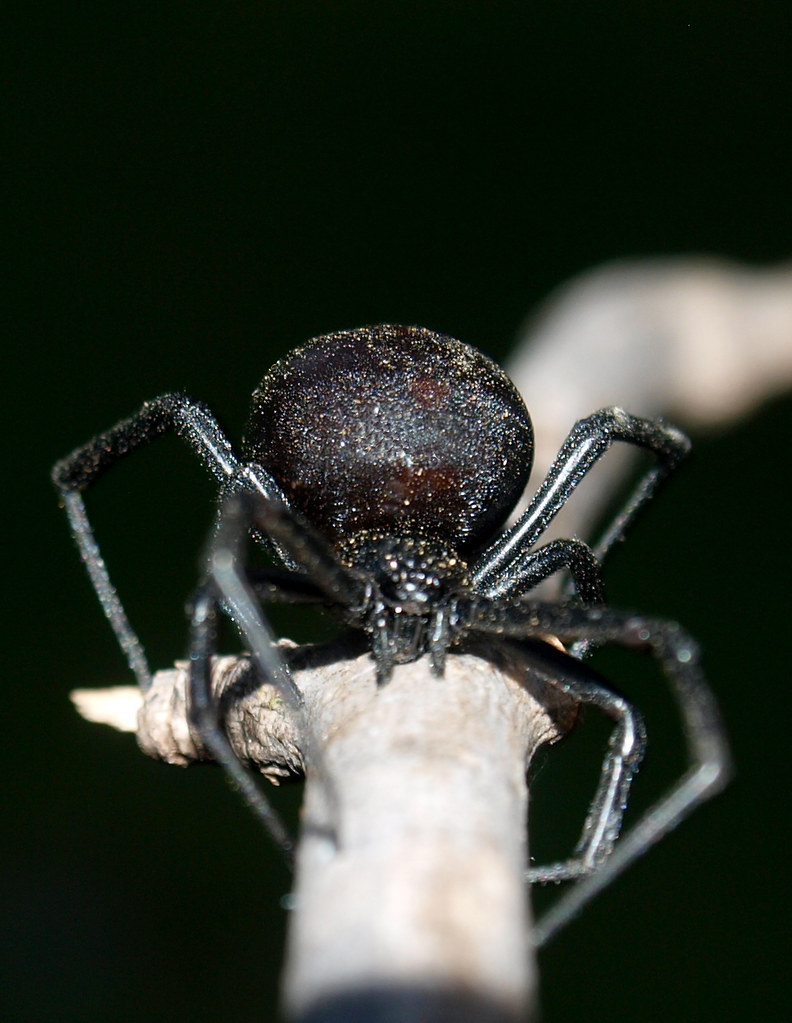 The black widow refers to the Latrodectus genus of spiders.  It describes the true widows that include brown and black variants.  There are thirty-two species in total.  The small widows have a potent venom that contains a neurotoxin called latrotoxin.  The poison causes the illness latrodectism and is named after the genus.  Females have larger venom glands than males and are harmful to humans.  The males are not.

A black widow bite sometimes has no injection.  These little chomps are named dry bites and are harmless.  Most wet bites will cause general pain and nothing else.  Twenty five percent of the time, a wet bite may transmit enough poison to cause latrodectism.  Symptoms include nausea, vomiting, stomach cramps and muscle pain.

The ordeal begins with a pinprick and a burning sensation.  Localized pain will develop near the puncture in the first ten minutes.  Sweating and the formation of goosebumps will appear before the fist hour.  A small number of people can experience harsher effects.  The venom will travel upwards from the bite and cause shoulder and back pain.  An irregular pulse and a fluctuation in blood pressure is common.  Headaches and vomiting are rare and may drain the victim’s stamina.  The symptoms cycle through the nervous system for one to four days and are gone within a week.  Untreated bites may cause issues that last up to a month.

Around two thousand bites are reported each year in the United States.  The majority do not warrant medical treatment.  No one has died from a black widow since 1983.  The spiders are docile and will not attack unless they are threatened.  The antivenom is used for pain relief and not to preclude death.  Standard pain medication and placebos can be equally effective in treatment.

The western black widow is found in the western part of North America.  Females have a black colored body that is half of an inch long.  The bottom of their abdomen is marked with the famous red hourglass symbol.  It is sometimes yellow and on rare occasions it is white.  The spider mates when they come in contact with the opposite sex’s web.  The male will court the female by tapping her masterpiece.  He will explore the outskirts of the web and then the couple meets in the middle.  The process completes after a few minutes to a few hours.  The male does not always survive.

The black widow idles upside down in the middle of their web.  When an insect enters their domain, they will attack with a swift bite.  The spider wraps the insect in silk after the assault.  The web is sticky and pliable.  Prey will lose mobility and the web will break apart for easy access.  Weevils, ground beetles, ants, wasps, bumblebees and darkling beetles are their favorite.  Peak feeding activity occurs between May and September.

Mice are the western black widow’s main predator.  The female spider will spray the rodent with a chunk of silk to deter an onslaught.  The effect is nontoxic, but the irritation is often effective.  Male spiders are incapable of the defensive maneuver.  Their lifespan is shorter than the ladies and their energy is reserved for reproduction.

The southern black widow is known as the shoe-button spider and found in the southeastern United States.  Their range is vast and they can proliferate down throughout Texas and as north as Ohio.  Females are twice the size of males and have long legs in comparison to their body.  They are solid black in color and have an orange or red hourglass on their underside.  Pregnant females can balloon in size.  Males are adorned in purple.  Juveniles are gray with white stripes.

Female shoe-buttons can produce between four to nine egg sacs.  One hundred to two hundred eggs develop in each sac.  They incubate for a month and less than one hundred will be born.  Under thirty survive due to cannibalism and lack of resources.  Males last up to four months and female black widows can live to three years.  The female will sometimes eat the male after mating.

The widow’s webs are stronger than their western counterparts.  It is elastic enough to capture small animals and mice.  They will prey on other spiders when it is convenient.  Large centipedes, mantis and wasps are their natural enemies.  The brown widow is currently invading the southern black widow’s territory in Southern California.  They could cause their extinction in the future.

The northern black widow can be found throughout Delaware, Maryland and New Jersey.  Some have been spotted in Massachusetts, Connecticut, Michigan and Quebec, Canada.  Their bite has no available antivenom.  The Galapagos black widow is found throughout the Galápagos Islands.  Sightings are very rare.  The Mediterranean variant is found in Europe and parts of Asia.  The spider has thirteen red, orange and yellow spots on its abdomen.  It is called the black insect in Kazakhstan and female bites have killed camels.