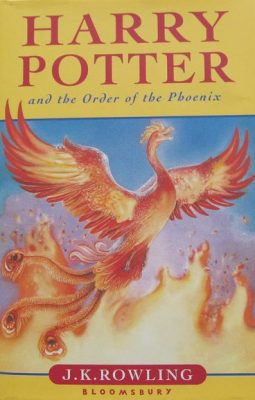 Harry Potter and the Order of the Phoenix shadows Harry Potter during his fifth year at Hogwarts.  J.K. Rowling is the author and it was published in June 2003.  Two, plus zero, plus zero, plus three is five (Book 5).  Was this intentional?  Absolutely not.  Are arithmetic and numerology important?  Who is to say?  Harry and his plump cousin Dudley are attacked by dementors in the first chapter.  Dementors are scary that’s one fact.  Harry conjures some magic and they escape.  The two of them escape.  Their neighbor Mrs. Figg is the third to enter and she is a Squib.  She is not a marine cephalopod with two tentacles and eight arms (that would be a squid), but rather a person born into a family of wizards with no magical ability.

Magic is not allowed during summer break and an owl notifies Harry that he has been expelled.  He can keep his wand until his hearing at the Ministry of Magic.  Things are looking down on young Harold.  He writes a few letters and his owl Hedwig shoots out into the sky to deliver the messages to Hermione, Ron and Sirius.  The Order of Phoenix appear and they fly to London on brooms.  Mad-Eye Moody hands Harry a piece of paper with the address of the Order’s headquarters (Number 12 Grimmauld Place).  The gang drops him off at the doorstep. The location is hush hush. The Weasleys and Hermione greet him.  Sirius is there too.

Harry learns that Grimmauld Place is the childhood home of Sirius and that the Ministry of Magic refuses to accept Voldemort’s return.  There is a rift between the ministry and Voldemort and the Order of the Phoenix’s investigation has learned that Dark Lord is looking to commandeer a secret weapon.  The purpose of the Order is to counteract Lord V. and the Death Eaters.

Potter is fashionably late to his hearing.  The court consists of fifty wizards known as The Wizengamot.  Dumbledore and Mrs. Figg testify in his defense.  The Wizengamot was impressed with Harry’s ability to dispel the dementors, but the opinion is split.  The vote is taken and he is cleared.  Professor D. vanishes before Harry can thank his role model.  Everyone celebrates and Ron and Hermione are selected as Gryffindor prefects.  The kids head to school.

Dumbledore tells the students that Professor Umbridge is the new Defense Against the Dark Arts teacher and that Wilhelmina Grubbly-Plank is filling in for Hagrid as the Care of Magical Creatures substitute.  Time passes and the workload increases.  The fifth-year students have to take the Ordinary Wizard Level exams (O.W.L.s).  Umbridge turns out to be a real gem and refuses to teach actual defensive spells.  Her syllabus is dedicated to the study of them instead.  This and her outright denial of Voldemort’s return upsets Harry.  He erupts and wins the grand prize of elongated detention.  Homework and detention.  These young wizards, they grow up so quick.

Harry rolls into detention.  He gets the Bart Simpson treatment and has to write “I must not tell lies” several times with a special quill.  The words materialize in blood and the phrase scars into his hand.  It returns to normal, but the skin is flush.  Ron tries out for the Gryffindor Quidditch team.  He earns a spot as a Keeper.  A handshake is in order.  The aftereffects of detention cannot prevent a best friend’s embrace.

The gang is studying in the common room and Sirius’s head emerges in the fireplace.  Harry lambasts Professor U. and Sirius mentions that he wants to accompany him during a Hogsmeade visit.  Hermione and Harold reject the notion, but the Godfather says the reward is worth the risk.  Classic Sirius.

Dobby runs into Harry.  He informs him about the Room of Requirement that only appears when it is needed.  The room is used to form Dumbledore’s Army.  The mission statement of D.A. is to stand up to the tyrant Umbridge and to practice Defense Against the Dark Arts.  Hermione pins a piece of parchment on the wall with the names of all of the members.  Practice begins and it goes well.

Hagrid returns and tells Hermione, Harry and Ron that he was talking to giants.  He tried to enlist their help to fight against Voldemort, but it was a Voldabort.  They declined.  The next day Harry has a nightmare.  He awakes in agony and Neville brings McGonagall.  He tells her that a snake has attacked Arthur Weasley.  They visit Dumbledore and the Order of the Phoenix saves Ron’s father.

Professor Snape teaches Harry Occlumency, the antithesis of Legilimency (mind reading).  He is not a fan of Snape, but his expertise is undeniable and Snape is a member of the Order of the Phoenix.  Umbridge discovers Dumbledore’s Army and Dumbledore takes the blame to prevent Harry’s expulsion.  He goes into hiding.  Dolores is promoted to headmistress.

The lessons continue.  Snape leaves.  Harry uses the Pensieve in Dumbledore’s office.  He sees a memory of his father and Sirius harassing Snape when they were at Hogwarts.  Severus returns and is upset.  George and Fred drop out of Hogwarts.  Harry and Hermione meet Hagrid’s half-brother Grawp.  Big G is a giant.  The O.W.L. exams begin and Harry finds McGonagall injured near Hagrid’s cabin.  She is sent to the hospital wing and Harry is restless deep into the night.

Stress and fatigue cause HP to fall asleep during his History of Magic O.W.L.  He has a hallucination of Voldemort torturing Sirius in the Department of Mysteries.  Hermione figures it is a trap to lure Harry to him.  He decides to act anyways and uses Floo Powder (in Umbridge’s office) to travel to Sirius’s location.  Umbridge catches him and demands answers.  She reveals herself to be the main antagonist and Hermione saves Harry from anguish by claiming that he was contacting Dumbledore about a weapon.  The villain demands that they take her to it and they lead her to the Forbidden Forest.

A group of Centaurs surround them in the forest.  Umbridge incites them and they take her away.  The students run into Grawp and are able to escape.  The pair links up with Ron and other members of Dumbledore’s Army.  Everyone hitches a ride on Thestrals (winged horses) to save Sirius.  Harry finds a sphere from his nightmare (a prophecy) in the Department of Mysteries.  Lucius Malfoy arrives and wants the orb.  Harry says “I don’t think so Bub.”  Lucius gets angry and Harry threatens to smash it.  Death Eaters start attacking the gang.  Members of the Order of Phoenix arrive as backup.  Dumbledore does too.  Bellatrix Lestrange kills Sirius.  Voldemort tries to murder Harry, but Big D. saves him.  A Portkey sends Harry back to the headmaster’s office.

Harry mourns his loss and Dumbledore explains the prophecy.  He is Voldemort’s equal and neither can live while the other is alive.  Also, his Aunt’s blood-link with his mother provides Harry with protection and safety in her household.  The pain is Potter’s greatest strength and Harry Potter and the Order of the Phoenix is J.K. Rowling’s strongest book…for now.

0 comments on “Harry Potter and the Order of the Phoenix”